The Enzkreis is a district in Baden-Württemberg . It belongs to the Northern Black Forest region in the Karlsruhe administrative district . Its area, like a ring open at the bottom, almost completely encloses the Pforzheim urban district , which is located in the middle of the district.

The Enzkreis has a share in the northern Black Forest , Kraichgau , Stromberg and Heckengäu . The Enz , which gives it its name , flows through the district from the south , in whose catchment area most of the Enz district is located. In the northeast it leaves the district in the direction of Besigheim (Ludwigsburg district), where it flows into the Neckar . Smaller river catchment areas are those of the Pfinz in the west and northwest, the Alb in the southwest and the Saal and Kraichbach in the north, all of which flow into the Rhine . The highest elevation of the Enzkreis is 709.1  m above sea level. NHN the Heuberg , which is on the mark of the Neuenbürger district of Dennach .

The Enzkreis borders in a clockwise direction in the west on the districts of Karlsruhe , Heilbronn , Ludwigsburg , Böblingen and Calw .

→ Main article : List of nature reserves in the Enzkreis

There are the following nature reserves in the Enzkreis :

The population figures are census results (¹) or official updates from the Baden-Württemberg State Statistical Office ( main residences only ). 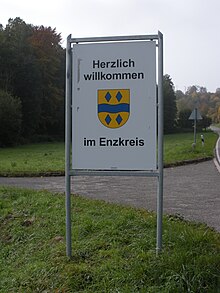 The district administrators of the Pforzheim district 1945–1972:

The district administrators of the Enzkreis since 1973:

The district council of the Enzkreis has 52 seats, and there are often compensatory seats. The members are elected by the electorate in the district for five years, each time at the same time as the municipal council elections. After the local elections on May 26, 2019 , the district council has 58 members (6 compensation seats; 2014: 55 members); Overall, the election led to the following result (in brackets: difference to 2014):

description
A blue wave bar in gold, accompanied by two upright blue diamonds at the top and bottom (award of the coat of arms on August 16, 1976)
meaning
The wavy bar symbolizes the Enz , which gave the district its name, the four diamonds the four former districts to which the present-day municipalities of the Enzkreis belonged and the four landscapes ( Black Forest , Heckengäu , Kraichgau and Stromberg ) that make up the district area.

See also : List of coats of arms in the Enzkreis

There has been a partnership since 1991 with the Altenburger Land district in Thuringia , Reggio nell'Emilia in Italy, the Polish cities / communities Myslowice , Chelm Slaski and Imielin, and since 2007 with the Hungarian Győr / Moson / Sopron county .

The Enzkreis has a partnership with the Masasi district in Tanzania with the aim of improving the health system and the quality of training in Masasi and increasing the use of renewable energies.

The federal autobahn 8 Karlsruhe - Stuttgart , several federal highways as well as state and district roads run through the district .

The rail networks of two state railways bordered on each other in the town of Pforzheim, which used to belong to Baden. The Badische Staatsbahn established the first connection from Karlsruhe to Pforzheim in 1859/61 and extended it to Mühlacker in 1863, where it joined the Stuttgart – Bretten line of the Württemberg State Railway, which was completed ten years earlier . This company opened a branch line from Pforzheim to Wildbad in 1868 and a line to Calw – Horb in the Nagold Valley in 1874 . It was not until 1914 that the connecting line from Maulbronn West to the city was added.

The Badische Lokal-Eisenbahnen- Gesellschaft connected Karlsruhe with Pforzheim from 1900/01 onwards with a narrow-gauge railway via Ittersbach. It was electrified in 1912 after the city of Pforzheim had installed an electric tram the year before. In 1931 the city took over the section from Ittersbach on its own.

In the far northeast, the new Deutsche Bahn line has been crossing the district since 1990. There is a possibility of boarding in Vaihingen / Enz, in the immediate vicinity of Illingen / Enzkreis.

Mühlacker is an important rail hub . The circular area is supplied through the rail network Karlsruhe of Albtal traffic Society : The line S 5 leads from Karlsruhe Pforzheim and Mühlacker to Bietigheim-Bissingen , S 6 of Pforzheim to Bad Wildbad , the S 9 of Bruchsal about Bretten by precinct.

Together with the city of Pforzheim and the transport companies, the Enzkreis organizes public transport through the Verkehrsgesellschaft Pforzheim-Enzkreis (VPE). In addition, the KVV tariffs apply to journeys on the rail routes between the VPE area and the Karlsruher Verkehrsverbund (KVV) in the Enzkreis.

The Enzkreis is responsible for the two vocational schools in Mühlacker, Ferdinand-von-Steinbeis-Schule (commercial school) and Georg-Kerschensteiner-Schule (commercial school) as well as the nursing school at the Mühlacker district hospital and the nursing assistant school at the Neuenbürg district hospital, as well as the two special needs education - and advisory centers (SBBZ) with a focus on learning Pestalozzi School Pforzheim and Comenius School Königsbach-Stein and the two SBBZ with a focus on intellectual development Gustav Heinemann School in Pforzheim and School am Winterrain in Ispringen .

The Enzkreis is also a partner in the Enzkreis-Kliniken non-profit GmbH, which belongs to the regional clinic holding Neckar-Schwarzwald, to which the clinics in the Ludwigsburg district also belong. The Enzkreis Clinics operate the Mühlacker Clinic, the Neuenbürg Clinic and the Mühlacker Geriatric Rehabilitation Clinic.

The Mühlacker transmitter of the Südwestrundfunk is located in the Enzkreis . The Langenbrand transmission tower is also located about one kilometer outside of the district boundary, but visible from large parts of the Enzkreis due to its topographical location .

In the Future Atlas 2016 , the district was ranked 104th out of 402 rural districts, municipal associations and independent cities in Germany, making it one of the regions with “future opportunities”. In the 2019 edition, it was ranked 160th out of 401.

On January 1, 1973, the district was assigned the PF distinguishing mark , which had been valid for the Pforzheim district since July 1, 1956 . It is still issued today.