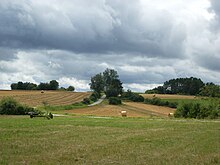 The Heckengäu is located west of the state capital Stuttgart . It forms a 50 km long ribbon from north to south, which extends from Vaihingen an der Enz in the north to Haiterbach in the south and includes parts of the districts of Böblingen, Calw, Ludwigsburg and the Enzkreis. In the west it borders on the northern Black Forest and in the east on the Korn- and Strohgäu , the Glemswald and the Schönbuch . Together with Korn-, Stroh- and Zabergäu , it forms the Gäu in Baden-Württemberg .

The landscape is part of the southwest German layered landscape. This slopes to the east due to the formation of the Upper Rhine Rift. As a result, the geological layers in the east-west axis come to the surface and cause the emergence of the different partial landscapes. The most important geological layer for the formation of the landscape is the shell limestone . It belongs to the systematics of the Germanic Triassic. Also belonging are the layers of the red sandstone and the Keuper, which lay under and overlay the shell limestone. The layers of shell limestone were deposited about 240 million years ago. The name was given here to the fossil-rich limestone that occurs in the Lower and Middle Muschelkalk.

Clay marl stones, gypsum, anhydrite and dolomite stones also occur. The hydraulic properties as well as the mechanical resistance of the geological layers are decisive for the formation of the landscape. For example, the karst formation of the subsoil is a main reason for the lack of water in the Heckengäu. Landforms and karst phenomena such as dry valleys , sinkholes , spring pots, shaft caves and floods can also be found. The geological layers overlying and underlying the Muschelkalk partly have different hydraulic properties and mechanical resistance, due to the changed conditions for the fluvial landscape formation, this leads to other landforms and landscapes.

The Heckengäu is a rural region, which is characterized by a hilly, heavily agricultural landscape. The landscape of the Heckengäus belongs to the gau landscapes . In the east it borders on the Korn-, Stroh- or Obere Gäu, which are also assigned to the Gäu landscapes. The landscape of the Northern Black Forest joins in to the west. The Gäu landscapes are old settlements and the northern Black Forest landscapes are jungle settlements . Typical soils are rendzinen , but loess layers can also be found in hollows, from which parabrown soils can form. The resulting agricultural use through arable farming, pasture farming and fruit growing characterizes the landscape. In the Heckengäu , for example, there are juniper heaths , orchards and field hedges that formed on the many stone bars and that gave it its name. Due to the high proportion of calc debris in the so-called skeleton soils, the stones were harvested from the ground in the past. The sloe hedges typical of the eastern district of Calw give the region the name “Schlehengäu”.

The highest elevations (with a height in meters above sea ​​level ) of the Heckengäus can be found near Calw-Stammheim (Thumb, 610.4  m ) and in and around the eastern Althengstett (Käpfle, 597.8  m and Jägerberg 587.4  m ). Other typical Gäu plateaus are, for example, the plateau near the “Sieben Tannen” with the villages of Deckpfronn , Oberjesingen and Kuppingen and the plateau “Tannenäcker” between Althengstett, Stammheim and Gechingen , which reaches a height of 580  m .

The wall fox is a resident of the Heckengäus (location: Malmsheim)

The silver thistle blooms in the Heckengäu on heathland (location: Renningen )

The Heckengäu has flora and fauna that are worth protecting. On the juniper heaths there are remnants of the silver thistle and the mountain aster . A few native gentian species also find a suitable growth site there. The common pasque flower blooms near Weil der Stadt in spring . The wall fox is at home in the dry valleys, while the sand lizard finds a suitable habitat in the dry stone walls on the edge of orchards in the Heckengäu. The strictly protected yellow-bellied toad looks for the smallest bodies of water and puddles.

Belong to the localities of the Heckengäus

The Heckengäu can be reached via the A 8 and A 81 motorways. In addition, there are various train connections (including the Stuttgart S-Bahn network). There are bus connections from the train stations in Leonberg , Weissach ( Württembergische Eisenbahngesellschaft - WEG), Mühlacker , Pforzheim , Böblingen and Weil der Stadt .

In the system of the handbook of the natural spatial structure of Germany , this north-south very extensive, west-east rather narrow band of the Heckengäus is not easy to find again: