Renningen is a city in Baden-Württemberg , which belongs to the Boeblingen district.

Renningen is located west of Stuttgart, between Leonberg and Weil der Stadt on the edge of the fertile Gäu landscape of the Neckarland in the Heckengäu . The Rankbach valley widens here to form the Renninger basin.

The evaluation of archaeological excavations and finds shows a development in the Renninger Basin that is based on two early Halemannic settlements north and south of the Rankbach. Excavations by the Baden-Württemberg State Monuments Office at the time in the Raite industrial park (1991) show multi-house courtyards consisting of three-aisled longhouses, storehouses and pit houses (4th / 5th centuries).

A second settlement in the Neuwiesenäcker developed into a large settlement that can be identified with the Altheim mentioned at the beginning of the 12th century. During the High Middle Ages, there were numerous other small settlement areas in addition to this settlement. In the 12./13. In the 19th century, there was a concentration of settlements in the later town centers, because around 1200 almost all settlement areas outside the two town centers collapsed. Some older finds in the center of Renningen show that there is an older core at the site of the later village. A few finds belong to the late Merovingian and Carolingian times, but most of the finds date from the 11th / 12th. Century and documents a simultaneity to the settlement in the Neuwiesenäcker. However, it remains uncertain whether there has been a continuity since the early Merovingian period. In the vicinity of the church there is a burial ground from the early Merovingian period examined by the State Monuments Office in 1989/90 , which breaks off around 500, although it remains questionable whether this also applies to the associated settlement area, the location of which can be assumed based on a single shard in the neighborhood . Later burials in the Renninger Basin have so far only become known on the southern outskirts of Malmsheim, where a series of cemeteries dating from the Younger Viking Age can be assumed.

The written tradition proves that Renningen belonged to the Villication System of the Weissenburg Monastery for the Carolingian period . 22½ courtyards are mentioned, whereby historical observations about the later fate of this property raise the question of whether all these courtyards were located on what was later to become a local boundary. In the 11th and 12th centuries, there is evidence of local nobility in both places in written records. Staufer possessions can be documented for Malmsheim and the abandoned Altheim. By the 14th century at the latest there was an organization at the community level in Renningen with the office of a mayor and the Dreizelgenwirtschaft .

Renningen came to the County of Württemberg in 1310 through purchase from the Counts of Hohenberg and was assigned to the office of Leonberg. Renningen is therefore a part of Old Wuerttemberg . In the early modern period Renningen was a coined from craft large village that his Etter border for a day. Marked partly preserved wall. At the beginning of the 19th century, after the founding of the Kingdom of Württemberg , the place remained subordinate to the Oberamt Leonberg in accordance with the new administrative structure of Württemberg . This means that Renningen has belonged to the Neckar District since 1818 . With the opening of the station in 1869, it was connected to the rail network of the Württemberg Railway . During the Nazi period in Württemberg , Renningen came to the Leonberg district in 1938 .

In 1945 Renningen came into the American zone of occupation and thus belonged to the newly founded state of Württemberg-Baden , which was incorporated into the current state of Baden-Württemberg in 1952. In 1973 the district reform in Baden-Württemberg took place , with Renningen becoming part of the Boeblingen district.

On January 1, 1982, Renningen was granted city rights. New development areas have expanded the former village significantly to the north. 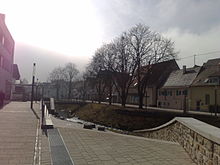 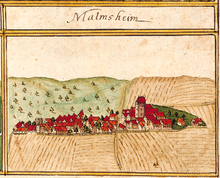 Malmsheim was first mentioned in 1075 as a property of the Weißenburg monastery under the name Malbodesheim ("Diemo von Malbodesheim" appears as a witness of the donation; later spelling of Malmsheim: Mahalbodesheim or Malbotesheim). In 1188 an allodium (dt .: own property) in Malmisheim is mentioned in a contract between Emperor Friedrich I Barbarossa and King Alfons VIII of Castile , in which the marriage of Friedrich's son Konrad with Alfons daughter Berengaria was agreed. This own property, which is believed to be in Malmsheim, was part of the bride's morning gift along with 29 other Hohenstaufen goods . However, this marriage was never put into practice. In the course of the 15th century, Malmsheim became part of Württemberg and was initially subordinate to the Leonberg Office, from 1470 to 1719 to the Böblingen Office, and since then again assigned to the Leonberg Office. In 1938 the place came to the district of Leonberg. In the course of the community reform, the place lost its independence and was incorporated into Renningen on March 1, 1972.

The development of the new building area Schnallenäcker (from 1996) contributed significantly to the growth of the district. The Malmsheim district has a population of 5,926 (as of November 30, 2010).

South of the city of Renningen is the Ihinger Hof, which, as an imperial knighthood property, formed its own mark for a long time and was not assigned to a parish. After the Thirty Years' War the estate came into the possession of the Barons von Bouwinghausen-Wallmerode. Even then, religious deviants found refuge on the farm. At the beginning of the 18th century it came by inheritance to Baroness Amalia Hedwig von Leiningen (1684–1754), who had separated from the Protestant Church. After her death, her son Baron Moritz Siegfried von Leiningen (1703–1782) inherited the farm. Both the baroness and her son offered shelter to separatists from the Duchy of Württemberg and from other countries. Meetings were held in the courtyard at which radical pietism ideas were spread. Prominent pietists from Württemberg such as Johann Michael Hahn and Johann Georg Rapp received decisive impulses here. Friedrich Christoph Oetinger was also among the visitors .

After the death of Baron Moritz Siegfried von Leiningen, who died unmarried, the court came to the v. Family. Göllnitz. In the 19th century, the Württemberg state acquired the property, which is currently owned by the state of Baden-Württemberg. Today the Ihinger Hof is used by the University of Hohenheim as an agricultural research center.

1according to the State Statistical Office of Baden-Württemberg ; until 1961 census results, from 1970 updates on December 31 of each year.

Until the Reformation , the Renningen parish belonged to the Weil district of the city in the Archdiakonat Trinity of the Diocese of Speyer . Since then, Renningen has been predominantly evangelical . The Protestant parishes of Renningen and Malmsheim belong to the Leonberg parish of the Evangelical Church in Württemberg . Since the end of the Second World War there has also been a Roman Catholic parish again. It belongs to the dean's office Böblingen in the diocese of Rottenburg . In addition, there is the Liebenzell Community and, since 2007, a Free Evangelical Church . The New Apostolic Church is also represented in Renningen with a congregation.

The council in Renningen has 22 members and consists of the elected, honorary councilors and the mayor as chairman. The mayor is entitled to vote in the municipal council. The local elections on May 26, 2019 led to the following official final result:

There is a youth council that has been elected every two years since 2001.

Renningen is economically dependent on larger municipalities, a large part of the employees work outside of the country, for example at Daimler in Sindelfingen or in Stuttgart . Nevertheless, there were and still are many of their own jobs, for example at the Pininfarina company, which is active in Formula 1 and sports car construction and had the headquarters of the German branch in Renningen until it moved to Leonberg in 2006. Furthermore, medium-sized businesses are on site. The Daimler subsidiary Smart was previously based in Renningen and Rinol AG, a manufacturer of floor coverings for industrial applications, had its headquarters in Renningen until its bankruptcy. Rinol AG, led by the former “Entrepreneur of the Year” Kurt-Jörg Gaiser, went public on the same day as Deutsche Telekom and was considered the “overperformer” of the CDAX . The lacquer and paint factory Wörwag has a plant for the production of powder coatings in the Renningen industrial area. The Eberspächer subsidiary Eberspächer SÜTRAK GmbH & Co. KG, a former subsidiary of the US air conditioning technology group Carrier , has its headquarters in Renningen. It is one of the world market leaders in the air conditioning of commercial vehicles and buses. Renningen has been the research hub of Robert Bosch GmbH since 2015 . Around 1700 employees work in the new development center. The companies Kromberg & Schubert and Hutchinson each operate production sites in Renningen.

The next larger airport is 22 km away ( Stuttgart ). In the north of the municipality is the Malmsheim airfield , which is used as a glider airfield and for military parachute jumps.

The Wurttemberg Black Forest Railway is now in transit through the line S6 ( Weil der Stadt -Renningen- Leonberg - Stuttgart ) the S-Bahn Stuttgart used from the next to the railway station Renningen yet a further break point in the district Malmsheim is operated. A reactivation of the disused western section to Calw as " Hermann-Hesse-Bahn " is currently being planned. Since December 2012 the Rankbachbahn (via Magstadt and Sindelfingen to Böblingen ) has been in operation again for passenger traffic as the S 60 line. In the course of this reactivation , the S-Bahn traffic was started at the second Renningen station, the Renningen Süd stop .

Renningen is connected to the supra-regional road network by federal highway 295 (Stuttgart– Calw ). There is also the B 464 Sindelfingen – Renningen, which is linked to the B 295 near Renningen.

The rescue station of the German Red Cross on the district road between Malmsheim and Renningen has been in operation since 2009.

Renningen Nature Theater - 2012 season: The citizen as a nobleman 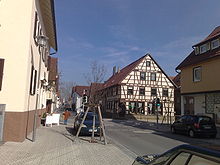 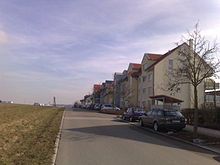 The SpVgg Renningen has about 2,100 members of the largest sports club in Renningen. In its nine departments, the SVR offers an extensive range of sports for every age and performance class. The largest club in the Malmsheim district is TSV Malmsheim.

Wikisource: Renningen in the description of the Oberamt Leonberg from 1852  - sources and full texts

Cities and municipalities in the Boeblingen district