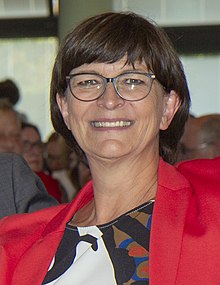 Saskia Christina Esken (* 28 August 1961 in Stuttgart as Saskia Christina Hofer ) is a German politician ( SPD ). She has been a member of the German Bundestag since 2013 and co- federal chairwoman of the SPD since December 6, 2019 .

Esken grew up in Renningen . Her political engagement began in a youth center in Weil der Stadt , of which Bernd Riexinger was one of the founders . While her parents joined the SPD because of Willy Brandt , the party was not left enough for her at the time. She obtained her Abitur in 1981 at the Johannes-Kepler-Gymnasium in Weil der Stadt. She broke off studying German and political science at the University of Stuttgart and then worked, among other things, as a parcel deliverer and waitress . In 1990 she completed an apprenticeship as a state-certified computer scientist at the Academy for Data Processing in Böblingen and then worked in software development until she ended her professional career in 1994 after the birth of her first child. About the volunteer Parents Association she came to the education policy and was from 2012 to 2014 as deputy chairman of the Parents Advisory Board of Baden-Wuerttemberg operates.

Esken has been married to Roland Esken since 1993, with whom she has three children. Her husband is retired and is involved as chairman of the Württembergische Schwarzwaldbahn Calw - Weil der Stadt (WSB) e. V. for an expansion of the Stuttgart S-Bahn . Saskia Esken also supports the cause. After Saskia Esken was elected to the German Bundestag, they moved from Bad Liebenzell to Calw .

Saskia Esken (r.) And Norbert Walter-Borjans (l.) At the SPD regional conference for the election of the SPD chairmanship on September 10, 2019 in Nieder-Olm .

At the federal party conference on December 11, 2021, Esken ran for another term of office; her previous co-chair, Norbert Walter-Borjans, did not run. She was confirmed in office with 75.9 percent of the delegates' votes and, together with Lars Klingbeil, forms the new chairman duo of the SPD.

In the 2009 federal election she ran for 28th place on the state list of Baden-Württemberg and in the Calw constituency . Your place on the state list was not enough for entry into the German Bundestag . In the Calw constituency, which has been won by the CDU candidate without interruption since 1949 , it achieved second place with 20.2 percent of the first votes behind Hans-Joachim Fuchtel from the CDU.

In the 2013 Bundestag election , she moved into the German Bundestag via 18th place on the Baden-Württemberg state list. In the Calw constituency, she came second behind Hans-Joachim Fuchtel from the CDU, with 20.2 percent of the first votes. In the 18th electoral term she was a member of the Committee on Education, Research and Technology Assessment , the Digital Agenda Committee and the Parliamentary Advisory Council on Sustainable Development . She was also deputy spokesperson for the parliamentary group's working group on the digital agenda.

In the federal election in 2021 , she moved into the German Bundestag again via first place on the Baden-Württemberg state list. In the Calw constituency, she took second place behind Klaus Mack from the CDU, with 17.2 percent of the first votes .

After the 2017 federal election , Esken described Agenda 2010 as a fall from grace, for which the SPD is still paying the bill. They also declared that the SPD had "finally to stop, auszubaldowern their personnel decisions in back rooms and to present us then." After the Federal Constitutional Court cuts in unemployment benefits II had declared unconstitutional for part, called Esken in November 2019, the abolition of Hartz IV sanctions .

Esken stated in the mid-term review of the Merkel IV cabinet that a continuation of the grand coalition would only be justifiable after an immediate increase in the minimum wage "to at least 12 euros", moving away from the debt brake and improving the climate package . She described the federal government's climate protection package as "not enough ambitious and also socially unjust". In the event that the CDU and CSU do not agree to renegotiating the coalition agreement, Esken wanted to “recommend that the party congress leave the coalition”. This position has since been revised by Esken.

Before her candidacy for the federal party chairmanship, Esken was particularly active as a network politician. She is against data retention and for a right to encryption. In the debate on the 2019 EU copyright reform , she was against the introduction of the upload filters provided for in it (Article 13) and against the ancillary copyright law for press publishers at EU level (Article 11). Esken advocates the decriminalization of cannabis "under strict conditions and with strict observance of the protection of minors."

Esken argues for the introduction of a speed limit on German autobahns that this is "good for the climate and safety". Often the “population is further than politics”, in this context they advocate enforcing the will of the majority “also against the protests of lobby groups”.

Following the decision of the supplementary budget to finance the consequences of the Corona, which provides for additional debts of 156 billion euros, Esken demanded a property levy for higher earners on April 1, 2020.

New Year's Eve 2019/20 occurred in the district Connewitz in Leipzig clashes between police and revelers that did not exist in previous years. She came under fire because Esken questioned police tactics and called for a review of the police operation, while at the same time the initial reporting and portrayal by the police were one-sided. Critics then accused her of reversing the perpetrator and the victim . Party friends like Sigmar Gabriel also criticized their statements. Esken stated that their statements had been misinterpreted, but did not deviate from their criticism of the police.

As a result of the protests against police violence in the USA, Esken accused the German police of "latent racism" and called for an examination of excessive police violence and racism. According to her, the vast majority of police officers would be very critical of such tendencies and suffer from the potential loss of confidence that would result. Politicians from the SPD and CDU as well as members of the Police Union (GdP) criticized these statements. The GdP spoke of a "verbal gossip" against the police and the SPD interior minister of Rhineland-Palatinate Roger Lewentz also found critical words against Esken. In this context, the SPD interior minister of Lower Saxony Boris Pistorius spoke of an “unjustified general suspicion”, and his colleagues from Thuringia and Berlin, both SPD, distanced themselves from Esken's accusations.

Esken came under fire for a tweet in the context of the death of George Floyd and Trump's reaction to wanting to ban “the Antifa”. In this she counted herself to the Antifa . In a tweet she replied that for her Antifa is "an acronym for anti-fascism " and referred to a possible meaning in the Duden. She would neither accept the reinterpretation by the New Right nor the occupation by acts of violence by left fringe groups, which, like any act of violence, are reprehensible and should be prosecuted. Critics from the CDU and FDP accused her of a lack of differentiation and, from their point of view, incorrect use of the term "Antifa".

The Islamism expert Ahmad Mansour accused her of playing down Islamism and political Islam and not considering them adequately after Esken claimed on a talk show that Islamism "does not express group-related enmity per se" and is "not a form of discrimination," which is why the SPD is positioning itself in their election manifesto against Islamophobia , but not against Islamism. Mansour accuses the SPD of having distanced itself from liberal Muslims among Esken . Esken accused him of "showmanship".

In June 2021, the German Bundestag approved the use of state Trojans by the federal police , federal intelligence services and state agencies for the protection of the constitution with the votes of the grand coalition . Esken's public distancing from the use of state Trojans sparked criticism from the SPD parliamentary group. SPD member of the Bundestag Ulli Nissen called Esken's behavior shabby. Juso representatives supported their stance, but criticized the fact that Esken, as party leader, could not prevent the SPD from approving.

Esken is a member of the non-partisan European Union Germany , which advocates a federal Europe and the European unification process. She is also a member of BUND , Greenpeace , Campact , D64 , ver.di and the Friends of Nature . She is also a sustaining member of the Society of liberties with the aims of strategic action guiding the fundamental rights and human rights to maintain and expand.

Party leader of the Social Democratic Party of Germany