Former logo of the friends of nature

The Friends of Nature or, more precisely, the Friends of Nature International , or NFI for short , is an international, socialist environmental, cultural, leisure and tourism organization. The roots of the nature lovers lie in the labor movement in the late 19th century. Naturfreunde sees itself as an "association for environmental protection, gentle tourism , sport and culture". In its statutes, it is committed to democratic socialism and is therefore to be distinguished from predominantly bourgeois mountain and hiking associations or the young migrant birds that arose a short time later .

They are best known for their Europe-wide network of almost 1000 Naturefriends' Houses : inexpensive, near-natural public restaurants and overnight stays that are available for individual guests and groups. Naturefriends organizations exist in 48 countries, mainly in Europe . With half a million individual members, Naturefriends are one of the world's largest NGOs .

The idea for an association came from Georg Schmiedl . From March 22 to 24, 1895, he placed an advertisement in the workers' newspaper and was looking for like-minded people. On April 14, 1895, like-minded people went on a hike up the Anninger in the Vienna Woods with 85 participants. Further meetings and hikes followed in loose groups without an association structure. In the spring and summer of 1895, interested parties met to prepare for the establishment of the association. Alois Rohrauer , Leopold Happisch and Anton Kreutzer drafted the first association statutes. On September 16, 1895, the "Tourist Association Die Naturfreunde " (TVdN) was founded in the Gasthaus Zum Goldenen Luchsen in Neulerchenfeld (founding meeting). Alois Rohrauer was elected first chairman. The aim was to give working people an opportunity to spend their free time in a meaningful way, to strengthen their health, to awaken a love for nature and to continue their education. In 1895 the association had 191 members, 12 of whom were women.

In 1896 the Friends of Nature founded an aid fund to collect funds for the rescue of comrades who had died in an accident. This was necessary, among other things, because members of the Friends of Nature, who were mainly recruited from the labor force, could not afford mountain guides, the paths were poorly marked or not available, and the equipment was mostly inadequate. In 1902 the Friends of Nature joined the Alpine Rescue Committee, which Alpine associations had founded in Vienna and Lower Austria . It was planned to take out accident insurance based on solidarity, but could not be implemented because of the high premiums demanded by the insurance companies.

At Whitsun 1897, the first Friends of Nature Association outside of Vienna was founded in Steyr , followed in June by a local group in Turn in Bohemia . On July 15, 1897, the association newspaper Der Naturfreund was published for the first time with a circulation of 400 copies. The editing and organization was taken over by typesetter Leopold Happisch. In 1897 the association already had 344 members (27 of them women). On September 28, 1897, a natural science section of the Friends of Nature was founded to impart knowledge of botany and mineralogy to the members .

On August 14, 1898, the Friends of Nature organized the first special train for their members to offer them an inexpensive way to travel. The trip went to Salzburg and around 500 people took part. Depending on the interests, the city ​​of Salzburg was explored, the Watzmann climbed, the Gollinger waterfall or the Salzachöfen visited. 195 went over the Torrenerjoch to Bavaria and the Königssee . Another special train was organized to Zell am See in 1899 and to Innsbruck in 1900 . The local group Steyr organized the first ski party on the Schoberstein in 1898 , in 1901 the club newspaper advertised skiing and offered tours in the Vienna Woods .

In 1900 the membership had grown to 2122 people, 217 of them women. Due to this rapidly growing number of members, the first nature lovers' home was opened on December 17, 1900 in Löhrgasse in Vienna Fünfhaus.

Since its foundation, the association has campaigned for fair working and living conditions and against the exploitation of people and nature. At the international Friends of Nature Congress in Geneva in 1972, the guiding principles on environmental protection said: “All economic measures must be subordinate to ecological necessities.” The friends of nature assumed early on that the planet's ecosystem was in danger of losing its natural balance. These red-green original ideas reappeared, for example, in the UN model of sustainable development . 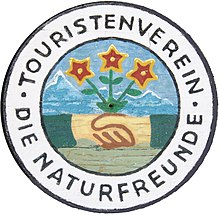 A logo traced around 1920, which is still on the front of the Feldkircher Hütte der Naturfreunde.

The first logo, a signet with two hands and three Alpine roses , for the new club was drawn by Karl Renner in the apartment of the first chairman, Alois Rohrauer, in 1895. The two holding hands should represent the solidarity that characterizes the labor movement. The first motto was: Hand in hand, through mountain and country .

The greeting of the friends of nature is to this day "Berg frei!", In contrast to the "Berg Heil!" Of the alpine clubs . This greeting was proposed by Alois Schnepf to the newly founded Graz section of nature lovers on January 14, 1900 and adopted for all nature lovers.

Members are various Naturefriends organizations in the following 43 countries:

Friends of nature in Germany

Friends of nature on the We're-fed-up! Demonstration 2013.

In the Soviet occupation zone (SBZ) there was a fight after the Second World War to re-admit the Friends of Nature Organization. The name "Antifascist Tourist Movement (ATB)" was given, but without success. After the forced unification of the KPD and SPD to form the SED, the name was changed to the “Unity Tourist Movement (ETB)”. Even after another renaming to “Friends of Nature and Homeland”, the Soviet Military Administration in Germany (SMAD) still refused to accept a new license because it provided for a different organizational structure for the area of ​​culture and sport: The Free German Youth was founded , the company sports associations (BSG) and the cultural association for the democratic renewal of Germany . The friends of nature had to be divided among these organizations.

The Friends of Nature in Germany (NFD) (own spelling "Friends of Nature") call themselves a political leisure association today and are committed to the ideals of democratic socialism and sustainability. In the subtitle they call themselves "Association for environmental protection, soft tourism, sport and culture". According to their own information, they have 67,000 members in 550 local groups in Germany that operate more than 400 Naturefriends Houses. As a non-governmental organization , they are primarily committed to an environmental and climate protection policy that links social and ecological issues. They were one of the founding organizations of the Easter march movement . Since the emergence of anti-nuclear protests, you have been an actor in the German anti-nuclear movement . Michael Müller is the chairman of Germany's Friends of Nature .

Co-organized by the Friends of Nature: The Boulder Worldcup Vienna 2010 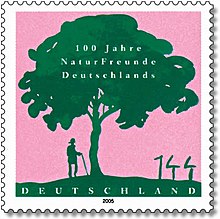 The Naturfreundejugend Austria works under the motto Life begins outside. The youth organization's leisure activities are aimed at children, adolescents, young adults and families. The federal management is in Wels in Upper Austria. The focus of activity is in the three areas of climbing + mountain sports, winter sports and nature + environment. The adventure education-oriented training and further education offers of the Naturefriends Youth Outdoor Academy for volunteer members are of particular importance .

The Friends of Nature Switzerland (NFS) are one of around 50 member and partner associations within the international friends of nature movement NFI. There were a few dozen young workers and craftsmen who founded the first Naturefriends sections in Switzerland from 1905. As early as 1912 they built their first Naturfreunde hut on the Säntis ; the oldest NF house still in existence today is the “Gorneren” built in 1913 at the back of the Kiental BE . Today around 80 Naturefriends Houses are available to the public in Switzerland. Some of these NF houses are typical self-cooker houses and are therefore ideal for groups and families. Others are managed and also offer guests a restaurant and hostel service.

In the period between 1920 and 1950, the Swiss Friends of Nature distinguished themselves primarily as a socialist cultural movement. Her ideal values ​​included self-help, learning from nature and strengthening body and mind. Specifically, the movement saw its task in providing access to leisure, sport and tourism for all those who could not do this on their own. In this context, the traditional greeting that nature lovers exchanged: “Mountain free!” After the Nazis came to power in Germany in 1933 and the fascist Dollfuss regime in Austria in 1934, the nature lovers organizations there were banned, their property confiscated and the nature lovers houses confiscated. In response to this, the headquarters of the Naturfreunde Internationale was relocated from Vienna to Zurich, where it remained until 1988.

From the 1950s onwards, the organization, which had been oriented towards socialism in Switzerland until then, opened up and reached broader social classes with its leisure activities. As a result of the increasingly noticeable and visible negative consequences of economic growth, Naturfreunde Schweiz also increasingly positioned itself as an environmental association from the 1980s onwards .

With their leisure activities in the field of nature sports , their commitment to interpersonal contacts and sustainable development, the leadership training courses and the Naturefriends Houses open to all, the NFS are now considered an association for socially just, affordable and ecologically justifiable tourism. As early as 1999, as a contribution to sustainable tourism, they launched the Alpine Culture Trail. It is a long-distance hiking project across Switzerland, from Lac Léman to Val Müstair , documented in detail in the book Kulturweg Alpen . The NFS had already made a contribution to long-distance hiking and regional development in Switzerland with the hiking book Passes walk - hiking on old paths between Uri and Piedmont .

The magazine “Naturfreund”, which appears four times a year, also focuses on experiencing nature and the environment, on environmentally friendly, socially responsible leisure activities. In addition, the Friends of Nature, in cooperation with the network of Swiss nature parks, present the pocket hiking guide series “Natura Trails”. These publications, especially aimed at families with children, raise awareness of the values ​​of a healthy, natural habitat. The hiking routes described in the pocket guides lead through the attractive landscapes of the Swiss nature parks.

The NCCR are members of the Swiss Climate Alliance .

The Friends of Nature have built more than 1000 houses in the course of almost a hundred years. There are over 400 Naturefriends Houses in Germany. The breadth of the offer ranges from the simple mountain hut to the hotel-like nature friend house, from self-catering to elaborated holiday offers and arrangements.