Ute Vogt (born October 3, 1964 in Heidelberg ) is a German politician ( SPD ). From 2002 to 2005 she was Parliamentary State Secretary at the Federal Minister of the Interior . From 1999 to 2009 she was state chairwoman of the SPD Baden-Württemberg . She is a member of the German Bundestag . From December 2013 to November 2017 she was one of the seven deputy chairmen of the SPD parliamentary group .

Ute Vogt, who grew up in Wiesloch , studied law in Heidelberg after graduating from high school in Wiesloch , which she completed with two state exams . Vogt also studied at the German University of Administrative Sciences in Speyer . Since then she has been working as a lawyer .

After Ute Vogt had been involved with the Jusos since 1983 , she also became a member of the SPD in 1984. From 1991 to 1994 she was the spokeswoman for the Jusos in Baden-Württemberg . From 1993 she was a member of the SPD state executive. In 1995 she was elected deputy state chairman. From 1999 to 2009 she was the SPD state chairwoman in Baden-Württemberg.

In 2001 she ran in the state elections as the top candidate of the SPD against Prime Minister Erwin Teufel . Although it failed to achieve its stated goal of changing government, the SPD improved by 8.2 percentage points and achieved its best national result since 1972 with 33.3 percent of the vote.

Since 2001 she has been a member of the presidium of the SPD. From 2003 onwards Vogt was deputy federal chairwoman of the SPD. For the federal party conference in October 2007 she was no longer nominated for the office of vice-chairman. At the federal party conference on October 26, 2007 in Hamburg, she was elected as a member of the party executive in the first ballot with 345 votes.

She was again the SPD's top candidate for the state elections in Baden-Württemberg on March 26, 2006 , in which the SPD achieved 25.2% of the votes and thus fell back to the level before Vogt's first top candidacy in 2001.

After the state elections, Vogt took over the chairmanship of her parliamentary group and thus the office of opposition leader in the state parliament. Again and again she had to assert herself against internal party critics. Although the state party conference in Fellbach in September 2007 was preceded by a heated discussion about her, after a combative speech she was confirmed as state chairman with 77.4 percent.

At the beginning of 2008, she announced her resignation from the group presidency. On January 10, 2008, Claus Schmiedel was elected as her successor .

In response to the south-west SPD's poor result in the 2009 federal election and its own performance in the Stuttgart I constituency , it announced on September 30, 2009 that it would no longer run for the state chairmanship of the SPD. At the state party conference of the SPD in Karlsruhe on November 27, 2009 , Nils Schmid was elected her successor.

Ute Vogt at the SPD base conference on October 10, 2006 in Schorndorf 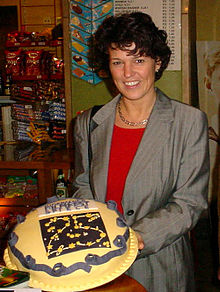 From 1989 to 1994 Vogt was a councilor in Wiesloch . From 1994 to 2005 she was a member of the German Bundestag . From 2000 to 2002 she was chairwoman of the interior committee. Ute Vogt entered the German Bundestag in 1998 as a directly elected member of the Pforzheim constituency and otherwise always through the Baden-Württemberg state list. After the federal election in 2002 , she was appointed on October 22, 2002 as parliamentary state secretary to the Federal Minister of the Interior in the federal government led by Chancellor Gerhard Schröder ( Schröder II cabinet ). On November 22, 2005, she left office.

From 2006 to 2009 Ute Vogt was a member of the state parliament of Baden-Württemberg . In the state elections in 2006, she achieved 31.2% of the votes in the Bretten constituency and moved into the state parliament via a second mandate after the direct mandate went to the CDU candidate Joachim Kößler with 43.8% of the votes. Despite criticism from within the party because of the poor national SPD election results, she was elected chairman of the SPD parliamentary group on March 29, 2006 with 24 to 14 votes, thus replacing Wolfgang Drexler . On October 9, 2007, she announced that she would no longer be available for this position in the new parliamentary election in January 2008; Claus Schmiedel was elected as her successor . Ute Vogt resigned from her Landtag mandate on September 30, 2009 after her re-election to the Bundestag.

From 2010 to 2013 she was chairwoman (spokeswoman) of the SPD parliamentary group in the 1st investigative committee (Gorleben).

In the 18th Bundestag , Vogt was a full member of the Joint Committee and a full member of the Commission for the Storage of Highly Radioactive Waste (Repository Commission) in accordance with Section 3 of the Site Selection Act . She was also a deputy member of the Committee on Food and Agriculture , the Committee on the Environment, Nature Conservation, Building and Nuclear Safety , the Committee on Legal Affairs and Consumer Protection and the Conciliation Committee . From December 19, 2013 until the end of the legislative period, she was deputy chairman of the SPD parliamentary group and in this function was responsible for the areas of the environment, nature conservation and reactor safety as well as food and agriculture.

Chairwoman of the Interior Committee of the German Bundestag

State chairwoman of the SPD Baden-Württemberg