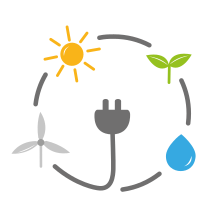 The aim is to promote the introduction of renewable energies in all their forms, in the political and economic field as well as in the public. The aim is to replace fossil and nuclear energies with a solar energy age. The association is non-partisan, non-profit and operates on an international level with 13 sections. Members of Eurosolar (German section) are approx. 2800 natural members, approx. 180 supporting members and approx. 400 legal members (associations, institutions, federal states, districts, municipalities, cities and companies).

Solar Age - Politics, Culture and Economy Renewable Energies is an organ of the association and at the same time a general- interest magazine (quarterly, circulation: 4,000 copies, ISSN  0937-3802 ).

The association was founded in 1988 on the initiative of the SPD politician and later holder of the Right Livelihood Award Hermann Scheer . The first manager was his wife, Irm Pontenagel. Scheer was President of Eurosolar until his death on October 14, 2010. In April 2011 Hermann Scheer was posthumously appointed Honorary President.

Eurosolar is a member of the Green Electricity Label e. V., which awards the seal of quality of the same name for green electricity offers.

». . . EUROSOLAR is not a lobby, not a federal association of medium-sized innovators, it is not a political party, not a law firm for energy issues, not a PR agency, not an information center for solar entrepreneurs and not a federal center for solar education - just all of this. As an organization, EUROSOLAR stands across from the usual sociological separation of the systems of politics, economy and science. . . and his activities range from specialist craftsmanship to providing information about the “societal, indeed global civilizational” task that has to be mastered in this century - so writes Hermann Scheer. It's an organization that suits its founder. An education agency, theoretical as well as practical, learned as well as cheeky, mediating between the knowledge of natural science and the idea of ​​a good society. An organ of the New Era, one of the nodes in a global network in which the future of a new era is being prepared. "

The association is registered with the German Bundestag in the “ Public List of the Registration of Associations and their Representatives ”.

Since 1994, the association has been awarding the German and European Solar Prize annually for projects in the field of renewable energies that are particularly worthy of funding. There are also national competitions in Germany, Austria, Switzerland, Denmark, Spain and Luxembourg. There are the following price categories:

In addition, so-called plaque winners of the German Solar Prize are presented every year. The projects awarded in the category owner or operator of systems for the use of renewable energies are buildings that are outstanding from an energetic point of view. Eurosolar would like to pay particular tribute to passive and plus energy houses.