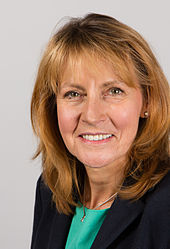 Edelgard Bulmahn (born March 4, 1951 in Petershagen ) is a German politician ( SPD ). From 1998 to 2005 she was Federal Minister for Education and Research and from 2005 to 2009 she was Chair of the Committee on Economics and Technology of the German Bundestag . The reforms that she initiated or implemented as Minister of Education include the expansion of all-day schools , the Bologna reform and the Excellence Initiative . In the 17th electoral term she was a member of the Foreign Affairs Committee of the German Bundestag. From 2013 to 2017 she was Vice President of the German Bundestag . At the end of the legislative period , it ended its parliamentary work in 2017.

The daughter of a barge and a hairdresser switched to the Petershagen secondary school after eight years of elementary school. After graduating from high school in 1972, Edelgard Bulmahn first spent a year in the “ Bror Chail ” kibbutz in Israel . After that, she began a teaching degree of political science and English literature in Hannover . In 1978 she passed the first and in 1980 the second state examination for teaching at grammar schools. Since then she has worked as a teacher at the Lutherschule Hannover . Edelgard Bulmahn has been married to Joachim Wolschke-Bulmahn since 1979 .

Party career and membership in parliament

Federal Minister for Education and Research

Since October 27, 1998, Edelgard Bulmahn has been Federal Minister for Education and Research in the Federal Government led by Federal Chancellor Gerhard Schröder . After the Schröder I cabinet , she also belonged to the Schröder II cabinet .

During her tenure, she initiated fundamental reforms in the German educational and research landscape. On November 19, 2001, after two years of work, the Education Forum initiated by her, in which, for the first time, representatives from the federal and state governments also contributed to social partners, churches, parents, schoolchildren, trainees, students and academics, made 12 recommendations to reorganize the German education system. These were aimed at improving the quality of school education, guaranteeing equal opportunities, better individual support and influenced the discussion on education policy in the years that followed. Bulmahn implemented the recommendation to expand the all-day school against the fierce resistance of the Union-led countries with the investment program Future Education and Care, which is endowed with four billion euros . The Upgrading Training Assistance Act has been significantly expanded by Bulmahn with the amendment of 20 December 2001, which was reflected in rapidly increasing numbers of participants. However, their proposals for reforming the German education system that went beyond this failed due to resistance in the federal states. An understanding was only achieved with regard to the National Education Report proposed by Bulmahn. In terms of vocational training, Bulmahn's tenure saw a number of innovations, especially in information and communication technologies. The Vocational Training Act (Germany) was fundamentally amended on April 1, 2005 for the first time in 35 years. A national pact for training and the next generation of skilled workers should ensure a sufficient supply of apprenticeships.

The Federal Training Assistance Act (BAföG) was also reformed by Bulmahn. The allowances and requirement rates have been increased significantly, loan debts have been capped and the restrictions on studying abroad have been lifted. However, with the introduction of a training allowance independent of parental income, which should have combined child allowance and family-related benefits, it failed due to the objection of Federal Chancellor Schröder. She only had a short-term success with her plan to legally exclude tuition fees and to legally anchor student representation in the University Framework Act, since the Federal Constitutional Court saw this as an inadmissible interference with the legislative competence of the states. Bulmahn exerted a lasting influence on the development of the German university landscape with the expansion of the promotion of women and the promotion of young talent ( graduate college , graduate school , Emmy Noether program ), the introduction of the junior professorship , the reform of the salary of professors ( salary order W ), the Bologna reform and the excellence initiative out. A better broad promotion of the universities, which it was striving for, failed because of the states that rejected the proposed pact for universities as an encroachment on cultural sovereignty and claimed the university building for themselves.

In terms of research policy, Bulmahn set accents with the “Research for Sustainability” program, the first funding of socio-ecological research, the establishment of the German Peace Research Foundation , the development of a specific program for the New States (InnoRegio) and the expansion of health research. It broke new ground with the targeted promotion of the dialogue between science and the population within the framework of Science in Dialogue and the establishment of the Science Years . The pact for research and innovation gave the non-university research institutions and the German Research Foundation financial planning security. Overall, despite the tight budget situation, Bulmahn managed to achieve a significant increase in funds of almost 36% for the promotion of education and research. With the election of Angela Merkel as Federal Chancellor, she left office on November 22, 2005.

In retrospect, Bulmahn shows understanding for criticism of the effects of parts of the higher education reforms that fall during her term of office: Something has gotten out of balance between project financing on the one hand and basic financing on the other. In science, short-term competition and long-term planning are needed at the same time. “But if scientists only have to write applications and no longer have the strength to be creative and pursue long-term research interests, then an imbalance has arisen.” This also applies to the short-term nature of many employment relationships: “2006, shortly after the end During my term of office, what happened as a minister was that three-, five- or nine-month contracts were permitted en masse. “The big problem in the 1990s was the juxtaposition and rigidity of the individual facilities. We then broke through this so-called pillar. ”Bulmahn describes it as“ the university-political necessity of our time ”to remedy the lack of basic funding for universities with federal funds. In the design of the Bologna reform , it identifies deficits in terms of staffing levels and further training opportunities.

Bulmahn was involved in the Trilateral Commission in Europe and as a member of the jury for the " Top 100 innovation competition ", an award for the most innovative German medium-sized companies.

Education Minister of the Federal Republic of Germany

See also : List of German Ministers for Education and Research

Research Minister of the Federal Republic of Germany

See also : List of German Ministers for Education and Research