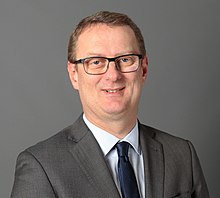 Oliver Kaczmarek (born August 8, 1970 in Kamen ) is a German politician ( SPD ) and social scientist . Since 2009 he has been directly elected member of parliament for the constituency Unna I . Oliver Kaczmarek has been chairman of the SPD sub-district of Unna since 2005.

Oliver Kaczmarek grew up as the son of a miner's family in Kamen. In 1990 he graduated from the Carlo Schmid Comprehensive School in Kamen. He then did his community service in the inpatient elderly care of the workers' welfare. He studied history and social sciences as a teacher at the Ruhr University Bochum and passed the 1st state examination for secondary levels I and II. Oliver Kaczmarek's first professional position took him to the Revierarbeitsgemeinschaft für Kultur Bergmannsbetreuung eV (Revag eV). He then worked as a youth education officer for the North Rhine-Westphalia Jusos and headed the state office. Before he moved into the German Bundestag, he worked as a consultant in the North Rhine-Westphalia School Ministry.

Oliver Kaczmarek was already involved in politics as a student representative. In 1988 he joined the SPD. Between 1990 and 1999 he was chairman of the Juso working group in Kamen-Mitte and deputy Juso district chairman for Western Westphalia. Since 1990 he has been a member of the local committee of the SPD Kamen-Mitte, since 2005 chairman of the SPD sub-district of Unna and since 2006 a member of the state committee of the SPD North Rhine-Westphalia. In the 2009 Bundestag election he ran in the constituency of Unna I and won the direct mandate with 42.6 percent of the first votes. In the 2013 federal election, Oliver Kaczmarek was able to defend the direct mandate with 46.7 percent. In 2017 he defended his direct mandate again with a result of 38.8 percent. He has been a member of the German Bundestag since October 2009.

The SPD federal party conference elected Kaczmarek on December 8, 2017 as a member of the SPD party executive committee .

Focus as a member of the German Bundestag

In the German Bundestag , Oliver Kaczmarek is the spokesman for education and research for the SPD parliamentary group and chairman of the committee for education, research and technology assessment . In addition, he is a deputy member of the Committee on Labor and Social Affairs and the Petitions Committee as well as a member of the SPD parliamentary group executive committee and the executive committee of the state group of SPD members of the Bundestag from North Rhine-Westphalia. In the Committee for Education, Research and Technology Assessment, he is responsible for the SPD parliamentary group, among other things, for the following topics: budget, federal-state cooperation, education council, educational reporting, BAföG, excellence strategy and student infrastructure. The red backpack is a symbol of his political work . In this he takes suggestions, wishes and criticism from the citizens of his constituency with him to Berlin.