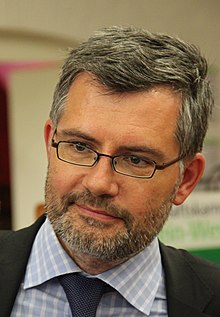 Dietmar Heinrich Nietan (born May 25, 1964 in Düren ) is a German politician ( SPD ) and a member of the German Bundestag . Since November 2010 he has been chairman of the board of the German-Polish Society Federal Association and since January 2014 Federal Treasurer of the SPD.

Dietmar Nietan attended the Martin Luther Primary School from 1970 to 1974 and the Burgau Grammar School in Düren from 1974 to 1983 . After high school he performed for 16 months until 1985 civil service in nursing at St. Augustine Hospital in Düren-Lendersdorf . He then studied biology and social sciences at the University of Cologne without completing his degree. He gained his first professional experience as an electoral district employee of the former SPD member of the Bundestag Josef Vosen . From this position he moved to the German Bundestag in 1998.

Dietmar Nietan is married and has a daughter and a son.

Since the beginning of 2010 Nietan has been rapporteur for the SPD parliamentary group on all questions of foreign and security policy in the European Union and is head of the Turkey coordination group of the SPD party executive. For the SPD, he was the rapporteur for the joint motion of the government groups (SPD, CDU / CSU ) for the debate in the Bundestag on April 24, 2015 to commemorate the genocide of the Armenians . The group leaders banished the term “genocide” from the application text in the justification. Nietan was disappointed, "that apparently at a crucial point there is a lack of courage to say what really happened". It is not helpful to bow to the pressure from Turkey and not to pronounce the word “genocide”. In addition, he is a member of the board of the state group of North Rhine-Westphalian SPD members of the Bundestag and belongs to the spokesperson for the parliamentary left in the SPD parliamentary group.

On March 16, 2013, the state delegates' conference of the SPD in North Rhine-Westphalia elected Nietan to fifth place on the state reserve list for the 2013 federal election. He received 99 percent of the votes cast.

In the 2013 federal election , Nietan received 34.24% of the vote and returned to the Bundestag via a list.

On January 26, 2014, Nietan was elected federal treasurer of the SPD with 84.3%. He thus succeeded Barbara Hendricks , who had previously been appointed Federal Minister.

Nietan is a member of the non-partisan European Union Germany , which advocates a federal Europe and the European unification process.