Uekermann is a redirect to this article. For other people with a similar surname, see also Ueckermann .

Johanna Uekermann at the SPD federal party conference 2017 in Berlin

Uekermann was born in 1987 in Straubing, Bavaria, as the daughter of a social-democratic teacher couple and grew up in nearby Mitterfels . After graduating from the Anton-Bruckner-Gymnasium Straubing in 2006 , she began studying political science , sociology and cultural geography at the Julius-Maximilians-Universität Würzburg , which she completed in 2013 with a Magistra Artium . She completed a semester abroad at the University of Geneva . She was a member of the Juso University Group and the GEW University Group and was a member of the speakers' council . She was also a student women's representative . From 2014 to 2018 she worked for the Bundestag member Axel Schäfer and since 2019 she has been working as a union secretary at the EVG .

At the age of 14 Uekermann joined the Jusos. She ran for the district council in the Straubing-Bogen district at the age of 21 and was elected to the SPD district executive. In 2009 she became deputy state chairwoman of the Bavarian Jusos and in 2011 deputy federal chairwoman. In 2013 she ran for the first time for the German Bundestag and achieved 17.6 percent of the vote against the CSU candidate Alois Rainer in the Straubing constituency . At the Juso Federal Congress on December 6, 2013 in Nuremberg , she prevailed with 207 of 296 votes against the former Hamburg Juso chairman Hauke ​​Wagner , taking over the office of federal chairman from Sascha Vogt , who had not reunited. In the local elections on March 16, 2014, she was elected to the district assembly Straubing-Bogen with the best individual result on the list and with a clear lead over long-time parliamentary group leader Heinz Uekermann, her father . On November 27, 2015, Johanna Uekermann was confirmed as Juso chairwoman for a further two years with 72.3 percent approval.

Uekermann's relationship with the former SPD party chairman Sigmar Gabriel was considered tense from 2013. She repeatedly opposed the SPD line - be it in the Greek crisis , data retention or the TTIP free trade agreement . She did not hold back with personal attacks on Gabriel. Since she publicly gave him the school grade "four minus", according to Gabriel in 2015 at the SPD's federal party conference, he decided not to attend the federal Jusos congress from November 27 to 29, 2015 in Bremen. Thomas Oppermann described Uekermann in this context as "consistently lacking in solidarity and unrealistic". Johannes Kahrs tweeted: “Our stupid Uekermann only causes mischief.” On December 20, 2015, Uekermann made an attempt to resolve the conflict in Stern : “I would be happy to have a clarifying conversation with Sigmar Gabriel, in which we can resolve the differences. I am ready for it, I hope he is too. ”Representatives of the left wing also accused Uekermann of leading the youth organization in the manner of a permanent institutional opposition in the SPD.

In December 2016, despite the support of the state chairman Florian Pronold, the attempt to achieve a promising place on the list for Uekermann in the 2017 federal election failed , which was partly due to the regional distribution of the list places, which in her home association of Lower Bavaria was already above proportional representation. On May 20, 2017, she was elected deputy chairwoman of the SPD in Bavaria at the party congress.

Uekermann announced on October 9, 2017 that he would not run again for the federal chairmanship at the Juso Federal Congress in November 2017. In October, she turned down the offer made by the SPD chairman, Martin Schulz , to act as federal manager under the new general secretary Lars Klingbeil at the Berlin party headquarters after the federal election . Instead, she ran for a seat on the party executive at the SPD federal party conference in December 2017 in order to help shape the renewal process of the SPD. After being elected as an assessor in the SPD party executive at the party congress on December 8th, she was also elected to the party presidium on December 9th. 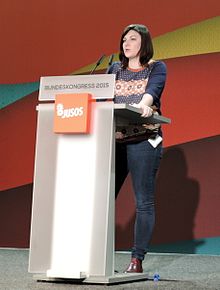 Uekermann spoke out against austerity measures to consolidate budgets in 2012 . Instead, she called for investments in order to cope with the euro crisis , which for her was not a debt crisis but a "government revenue crisis". At the same time, she also called for an increase in the top tax rate and a change of course in European policy, which, in her view, constituted “a Europe of banks and big earners, austerity packages and youth unemployment”. Furthermore, after the federal election in 2013 , she rejected the coalition agreement with the CDU / CSU and favored new elections with the aim of a red-red-green coalition .

Uekermann comes from the Bavarian Juso regional association and thus from the left traditionalist camp, according to the taz Bundestag correspondent Anja Maier ; Nevertheless, she wants to reform the party: "If you want to change something, you have to do both: on the street and in the committees." In the SPD, the weight of the Jusos should also increase again, who, in their opinion, “did not get enough promising list places in the Bundestag election campaign ”. In the 2013 election to the Bundestag, she herself took the hopeless list position 38. For her personal motto, she chose the famous quote from Rosa Luxemburg : "If you don't move, you won't feel your shackles."

When she was elected Juso federal chairman at the end of 2013, she again spoke out against a grand coalition in the federal government and criticized the fact that women's policy was increasingly reduced to family policy . During the federal election campaign a few months earlier, she demonstratively chained herself to a stove to protest against the childcare allowance .

At the height of the refugee crisis in the fall of 2015, she called for tax increases for higher incomes to cope with the increased costs. "We have to find long-term funding for refugee spending, so it makes sense to raise taxes for it" and "Those who have more have to shoulder more," she told the Westdeutsche Allgemeine Zeitung.

In February 2017, Johanna Uekermann, as head of Juso, spoke out against the deportation of migrants with no prospect of remaining. With a view to the SPD's demands to consistently deport such foreigners, Uekermann also said in an interview with “Welt”: “I would prefer if everyone could stay. The Jusos are for a global right to migration. "

Before the 2017 federal election , she spoke out against a new grand coalition.