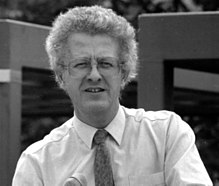 Voigt was born in 1941 as the son of an art publisher and a doctor. After graduating from high school in 1960, he studied history , German and Scandinavian studies at the universities of Hamburg , Copenhagen and Frankfurt from 1960–1969 at the St. Georg State Evening High School in Hamburg . He then became a research associate at the Hamburg Adult Education Center , of which he was deputy director until 1976.

From 1969 to 1972 he was federal chairman and from 1972 to 1973 deputy federal chairman of the Jusos and thus the first Juso chairman after the left turn . In the general election in 1976 Voigt was the first time in the Bundestag voted. The SPD parliamentary group elected him deputy foreign policy chairman in 1976 and its foreign policy spokesman in 1983; he held this office until he left the German Bundestag in 1998. From 1977 to 1998 he was a member of the Parliamentary Assembly of NATO and from 1989 to 1993 its chairman of the Committee on Defense and Security, from 1992 to 1994 its vice-president and from 1994 to 1996 its president. From 1973 to 2019 Voigt was a member of the SPD's commission for international politics, for several years as its chairman.
Voigt is (as of 2019) a member of the Advisory Board of the Atlantic Initiative . He is a member of the Board of Trustees of the Aspen Institute in Berlin, the Board of Trustees of the Einstein Forum in Potsdam, the Board of Trustees of the Checkpoint Charlie Foundation, and the European Leadership Network in London.

From 1999 to 2010 he was the federal government's coordinator for German-American cooperation; his successor was Harald Leibrecht .

Winner of the Manfred Wörner Medal