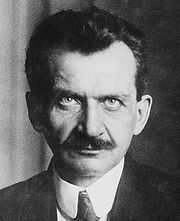 Otto Wels was already listed on the first expatriation list from August 25, 1933 after the Nazi takeover

Otto Wels was born the son of an innkeeper in Berlin. In 1891 he joined the SPD and began an apprenticeship as an upholsterer . After completing his apprenticeship, he worked in Berlin, Regensburg and Munich . From 1895 to 1897 he did military service .

Wels attended the party school of the SPD and in 1906 began to be politically active full-time. He was unionized for the association of upholsterers . From 1907 he worked as party secretary in Brandenburg and at the same time in the press commission of the forward .

His party work was successful, so that in 1912 he entered the Reichstag for the Calau - Luckau constituency and a year later, at the suggestion of August Bebel, moved to the SPD party executive.

After the Reichstag session he opened on the morning of November 9, 1918 , he followed a request from the Naumburg hunters to explain the political situation to them. Up to this point in time he had not been a member of parliament who represented the SPD in a prominent way. Alexander von Linsingen , Commander-in-Chief and Governor of Berlin, was still confident that morning that nothing would be lost as long as Berlin was held. As a precaution, in the days before he had brought troops that were considered particularly loyal to the Emperor, such as the Naumburg Jäger , to reinforce the city. In the yard of the Alexander barracks he complied with the request in front of the hunter who had stepped up. In doing so, he convinced them that they shouldn't shoot to avoid civil war. After the speech, the soldiers of the Jäger Battalion were the first to join the rebels. At the end of the day, it was thanks to Wels, who, inspired by his success that day in other barracks, that only 15 people died. After the First World War , he became a member of the Workers 'and Soldiers' Council in Berlin on November 9, 1918 , where he campaigned for the USPD to be represented equally alongside the SPD , and the next day he became city ​​commander of Berlin. As city commander on December 6, 1918, he gave the order to open fire on demonstrating Spartacists , which resulted in 16 deaths. In this position he was also significantly involved in the negotiations that were to lead to the evacuation of the Berlin City Palace by the People's Navy Division. Since these negotiations did not go as expected by the mutineers, he was finally arrested and mistreated by mutinous sailors in the stables from December 23rd to 24th, 1918 . Attacks by regular troops on the castle and stables, the so-called Christmas fights , were unsuccessful. Negotiations with the mutineers led to a compromise solution: the People's Navy Division evacuated the castle and stables and released Wels, who, however, had to resign from the post of city commandant; in addition, the People's Navy Division received its outstanding pay and remained as a force. 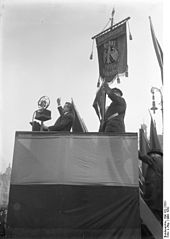 Together with Carl Legien, Wels led the general strike during the Kapp Putsch and then forced Gustav Noske to resign . He was instrumental in founding the Reichsbanner Schwarz-Rot-Gold and later the Iron Front . He also sat on the board of the Socialist Workers' International .

Wels advocated the SPD's policy of tolerance towards Reich Chancellor Heinrich Brüning . After the Prussian strike against the Otto Braun government, he was against a general strike . In autumn 1932, however, he advocated the general strike and prohibited any negotiations between the SPD and the Kurt von Schleicher government .

Shortly after the takeover of the NSDAP (30 January 1933), the general election (March 5, 1933) and the first wave of arrests took Wels there for the SPD, the rejection of the "Act to remedy the Distress of the People and the Reich" (Legislative) to justify which established the National Socialist dictatorship . In spite of the ongoing persecution and the presence of SA men in the hall, he did so with a clear rejection of National Socialism on March 23, 1933. In this last free speech in the German Reichstag he said: “Freedom and life can be taken from us, the honor not. "

All 94 SPD MPs present voted against the law. The 81 mandates of the KPD had already been canceled by the Hitler government on March 8th due to the decree of the Reich President issued after the Reichstag fire to protect the people and the state . The remaining members of the Reichstag voted for the Enabling Act. Adolf Hitler replied to Otto Wels' speech: “I don't even want you to vote for it. Germany is to be free, but not. "In the following weeks, he and through you Rudolf Breitscheid by Konstantin von Neurath cited as examples that foreign press reports of Nazi terror against dissidents only slander are.

In May 1933, under the impression of the SA attack against the trade unions, the party executive sent Wels to Saarbrücken in the still French-occupied Saar area . A little later the exile executive of the SPD moved its headquarters to Prague . In August 1933, the National Socialist government revoked German citizenship in the first expatriation list of the German Reich Wels.

In Prague, Wels built up the SPD's exile organization ( Sopade ). As a result of the Munich Agreement , the exile executive had to leave Prague and went to Paris at the end of 1938, where Wels died on September 16, 1939 at the age of 66.

In several German cities streets, squares and schools are named after Otto Wels. Otto-Wels-Straße in Hamburg reminds of him.

To mark the 70th anniversary of his death, a memorial stele was presented to the public on September 16, 2009 in the Berlin district of Treptow-Köpenick . The former SPD chairman Gerhard Schröder paid tribute to the merits and courage of the Social Democrat through his commitment at the last free Reichstag session in March 1933 against the NSDAP's Enabling Act.

On March 23, 2017, the President of the Bundestag, Norbert Lammert, announced that the building used by the Bundestag , Unter den Linden 50, will from now on be called “ Otto-Wels-Haus ”.

Speech on the rejection of the Enabling Act