Holzgerlingen [ hɔlt͡sˈɡɛr.lɪ.ŋən ] is a town in Baden-Württemberg , Germany , which belongs to the Boeblingen district.

Holzgerlingen is located in the Schönbuch clearing , five kilometers south of Böblingen . The old town is 475 meters above sea level on the watershed between the Aich that springs a kilometer southeast in the urban area, flows east and at Nuertingen flows into the Neckar, and westward to Pforzheim flowing Würm , three kilometers south of the municipality of Altdorf comes to light.

Holzgerlingen includes the town of Holzgerlingen, the ducal domain of Schaichhof and the former mills, the upper, middle and lower mills as well as the abandoned village of Ludlenbad.

The history of the settlement goes back to the Neolithic period. Celts settled between 550 and 50 BC. Around 100 AD Romans settled in the Holzgerlingen area. Alamanni ousted the Romans around 300 AD.

The first documentary mention of Holzgerlingen can be traced back to 1007 in a deed of donation from King Heinrich II to the diocese of Bamberg . Between 1100 and 1400 Holzgerlingen was owned by the Count Palatine of Tübingen . In 1348 the place was sold to the House of Württemberg .

The Peasants' War came to a bloody end in the region in 1525 with the Battle of Böblingen. During the turmoil of the Thirty Years' War , Wallenstein's troops were billeted in 1627 . In 1635 the plague broke out.

At the time the War of the Polish Succession was raging in Europe , Russian troops marching against France were quartered in Holzgerlingen in 1735. The outbreak of the Austrian War of Succession brought Trenck the Pandur and some of his journeymen to Holzgerlingen, where they stayed overnight in 1743.

In 1805 Napoleonic troops invaded and forced the residents of Holzgerlingen to do his own service ; however, they escaped and returned to their families. In contrast, the fifteen Holzgerlingers who, in 1812, forced by the alliance between King Frederick I of Württemberg and Napoleon I to take part in his Russian campaign, never returned to their homeland.

Holzgerlingen has always been part of the Böblingen office. Even with the implementation of the new administrative structure in the Kingdom of Württemberg at the beginning of the 19th century, the place remained assigned to the Oberamt Böblingen .

In 1850 Holzgerlingen had Protestant and 14 Catholic residents in 1824, who lived and worked in 359 main and 54 auxiliary buildings. In 1865 the first post office was set up in the village. In 1866, Holzgerlinger men went into the field on the side of Austria against Prussia and immediately afterwards in 1870/71 on the side of the former enemy Prussia against Napoleon III. to war . Two of the men died in the battles.

In 1907 Holzgerlingen was connected to the power grid. When the Schönbuchbahn was built in 1910, it was connected to the Württemberg railway network . 106 Holzgerlingers never returned from the First World War in 1918. During the district reform during the Nazi era in Württemberg , Holzgerlingen came to the Böblingen district in 1938 . In 1943 large-scale bombs fell on Holzgerlingen, which resulted in the destruction of 64 buildings, and in 1945, towards the end of the war, French occupation troops burned down the old town hall. The Second World War cost a total of 291 Holzgerlingern lives. In 1945, Holzgerlingen came into the American zone of occupation and thus belonged to the newly founded state of Württemberg-Baden , which was incorporated into the current state of Baden-Württemberg in 1952. Reconstruction began immediately after the war. In 1950 the town hall was rebuilt. Not least because of the proximity to Sindelfingen , Böblingen and Stuttgart , Holzgerlingen was able to develop in the following years from a former craft and farming village into a respectable cultural center in the Schönbuch clearing. On April 1, 1993, Holzgerlingen was granted city rights.

The farm, which was once owned by the Württemberg reformer Johannes Brenz in the 16th century , was sold in 1725 by a community of heirs from Bücheli or Büchelin for 4,000 guilders to the princely chamber factor and trader Johann Heinrich Eysenbach. Eisenbach had a building built on the courtyard. In April 1824 the Hofdomänenkammer bought the court from Dr. Leopold Klotz from Tübingen for 38,000 guilders (purchase contract of April 23, 1824). She leased the farm to the following tenants:

During the lease of the Böblingen sugar factory, the domain was rather poorly managed. It was only the driver family who fundamentally improved the estate through drainage and progressive cultivation. Despite the high location, the Schaichhof was run as a model business. In spring 1991 a golf course was opened at the Schaichhof.

The Reformation was introduced in Holzgerlingen in 1534. The place has been evangelical since then . 41.83% of the population are Protestant, 22.3% Catholic and 1.4% belong to another religious community. The remaining 34.47% of the residents are registered with the citizens' office without any indication of religion.

The population figures are census results (*) or official updates from the respective statistical offices (only main residences ). Unless otherwise stated, all figures were taken from the State Statistical Office of Baden-Württemberg .

The proportion of foreign citizens in the total number of residents is 10.45 percent.

The municipality council in Holzgerlingen has 18 members. The local elections on May 25, 2014 led to the following official final result. The municipal council consists of the elected voluntary councilors and the mayor as chairman. The mayor is entitled to vote in the municipal council.

Blazon : a silver lily in red.

In 1910 the place was connected to the railway network. In 1965, scheduled passenger traffic on the route was discontinued. After years of shutdown, the Schönbuchbahn was put back into operation in December 1996 . Three stops in Holzgerlingen (north, train station and Buch) connect the city to the Stuttgart S-Bahn network via Böblingen .

The federal highway 464 (Renningen– Reutlingen ) connects Holzgerlingen with the national road network. As early as 1934, the city received a bypass. As a result, the inner city area was largely spared from through traffic to this day. The B 464 is now partially developed as a four-lane expressway.

The oldest company in town is the ribbon weaving mill Gottlieb Binder , which has been located in the area since 1798 . Many traditional medium-sized companies, such as B. Elektro-Breitling GmbH, like Hänssler Verlag and other smaller companies, are among the local employers. The plant manufacturer Eisenmann is currently the largest employer . Because of the local proximity to the Mercedes location in Sindelfingen , suppliers with branches or sales offices have set up shop.

Many Holzgerlingers are employed in nearby Sindelfingen and Böblingen in well-known and globally active large companies such as Daimler , IBM , Philips , Hewlett-Packard or Keysight Technologies .

Holzgerlingen has a town hall with 700 seats, a meeting place (citizens' meeting place) and an old people's center with an attached nursing home.

Holzgerlingen has a modern school center with a primary school , secondary school , secondary school and grammar school ( Schönbuch-Gymnasium Holzgerlingen ). The offer is rounded off by the local special needs education and advice center (SBBZ) with a focus on learning (Heinrich Harpprecht School) and an adult education center . There are also twelve kindergartens and a city library with public Internet access.

In Holzgerlingen there is, among other things, a stadium, four sports halls, a heated outdoor forest swimming pool, tennis courts and indoor tennis center, riding grounds with several halls, a golf course (public and club) and the Schützenbühl with a motocross race track. The ADAC MX Masters take place here every year in September.

The sports association Holzgerlingen e. V., abbreviated to "SpVgg Holzgerlingen", was founded on June 1, 1946 as the successor to the sports clubs that had existed in Holzgerlingen up to that point and currently consists of 14 departments. The club is a member of the Württemberg State Sports Association (WLSB).

The city's American football team, the Holzgerlingen Twister , will play in GFL 2 in 2010 .

In 1960 the KSV Holzgerlingen was founded as a heavy athletics club; in the 1980s judo and taekwondo were added to the range of other martial arts.

The first team in the wrestling division fought 4 seasons in the second division in the 1980s.

The "KiSS Schönbuch" was founded in 2003 in cooperation with SpVgg Holzgerlingen and is an officially recognized children's sports school .
The martial art Modern Arnis complements the sports offer in the KSV since 2006.

Since 1950 there has been a scout tribe of the DPSG in Holzgerlingen , which is active in the rooms of the Catholic parish hall (Bischof-Sproll-Haus). At the moment (as of April 2008) the tribe has about 90 members. 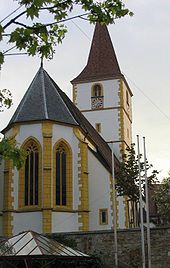 The amateur theater Theater der Käsreiter regularly performs Swabian dialect pieces in the Hotel-Restaurant Waldhorn . The theater agendas founded as part of the Local Agenda 21 have become a permanent fixture in the city's calendar of events.

Holzgerlingen has a local museum in the old school house.

With the youth culture center w3 (previously s'red) , Holzgerlingen has had a popular meeting place for young people in the city since 1999.

Wikisource: Holzgerlingen in the description of the Oberamt Böblingen from 1850  - sources and full texts

Cities and municipalities in the Boeblingen district