Niesky ([ ˈniːski ] pronunciation ? / I , Upper Sorbian Niska ) is a small town in the district of Görlitz in Upper Lusatia . With almost 10,000 inhabitants, Niesky is one of the smallest towns in the Free State of Saxony that has the status of a major district town .

The city is divided into five districts , in addition to the Niesky city center, these are Kosel ( Upper Sorbian Kózło ) and Stannewisch (Stanojšćo) in the north, Ödernitz (Wódrjeńca) in the southeast and See (Jězor) in the west.

Not established as a colony of the Moravian Brethren in 1742 , Niesky is one of the youngest local foundations in the Görlitz district, but soon developed into a regionally important place.

Floor plan by Niesky 1823, north is on the right, Monplaisir at the bottom left

On August 8, 1742, Bohemian exiles , who had left their Catholic homeland due to religious distress, laid the foundation stone for the first three houses in the village. They had joined the congregation in Herrnhut and were given the opportunity to settle at the Trebus manor , whose owner Siegmund August von Gersdorf himself was a member of the brotherhood. In December 1750 a young member of the Brethren, Günther Urban Anton von Lüdecke (1723–1788), acquired the manor. Zinzendorfplatz Nieskys was designed based on the Pillnitz palace complex .

The name of the new settlement comes from Czech , nízký means "low" in German. Their new home was low compared to the mountains of Bohemia. At the same time, the place name emphasized in the religious understanding how simple, small and low man is before God.

In March 1929, Interior Minister Carl Severing ordered the merger of Nieskys with its suburbs Neuhof , Neu-Särichen and Neu-Ödernitz . In 1935 Niesky was granted town charter with just under 7,000 inhabitants.

Towards the end of the Second World War , a subcamp of the Groß-Rosen concentration camp was built in the Wiesengrund of Niesky , in which 1200 concentration camp prisoners from numerous countries had to do forced labor for the Christoph & Unmack company (today wagon construction) . More than 100 of them died during an evacuation march to Spohla / Brandhofen. A memorial stone at the site of the former satellite camp today commemorates these victims. Jews from Breslau were among the forced laborers in Niesky .

From 1816 on Niesky belonged to the district of Rothenburg (Ob. Laus.) In the Prussian province of Silesia (or in the case of its division in the province of Lower Silesia ).

The Zinzendorfplatz with the Evangelical Church of the Moravian Brethren.

The listed Zinzendorfplatz forms the center of the city. The square with its buildings - some from the 18th century - reflects the 250-year history of Niesky. Niesky's first house has been preserved to this day. In 1986 the town's local history museum was set up there.

Niesky is home to the Emmaus Diakonissenanstalt, which was founded in Gnadenfeld / Upper Silesia in 1866 and is connected to the Brethren . It includes a nursing home for the elderly, a medical vocational school (nursing), a nursing school for the elderly, a day-care center and an outpatient hospice service. The hospital was transferred to the Diakonissenanstalt Dresden.

There are a total of four Protestant churches, a New Apostolic church, a Jehovah's Witness community center and a wooden Catholic church from 1935.

Since the municipal council election on May 26, 2019, the 16 seats of the city council have been distributed among the individual groups as follows (in brackets: profit / loss for the 2014 election):

The NPD , which previously held a seat, is no longer represented in the city council .

Beate Hoffmann was elected the new mayor in December 2014 with 57.8 percent of the vote.

Niesky has had a coat of arms since March 30, 1932 . It shows a three-pinned golden wall on a blue background. Above it, one above the other, there is a golden cross and a golden hammer. The colors blue and yellow as well as the wall are typical symbols of Upper Lusatia, especially the Upper Lusatian cities like Bautzen . The cross symbolizes the Moravian Brethren, to which the town was founded; the hammer stands for the Niesky manufacturers. 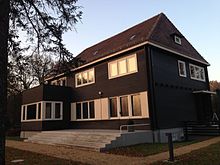 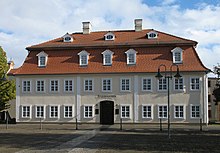 Another memorial on Fritz-Thiele-Platz commemorates the communist Nazi opponent Fritz Thiele, who was murdered in Auschwitz in 1942 after a long prison sentence . A similar memorial stone in Herbert-Balzer-Straße is dedicated to the communist resistance fighter Herbert Balzer , who was murdered in 1945 in the Gleina / Zeitz satellite camp of the Buchenwald concentration camp.

There is a memorial for the fallen of the First World War on the listed churchyard of the Brethren .

A memorial stone and a burial ground in the forest cemetery commemorate the German soldiers who died in the area at the end of the Second World War.

A listed obelisk in the Neusärichen cemetery commemorates four fallen soldiers in the Franco-Prussian War of 1870/71. These belonged, among other things, to Lower Silesian and West Prussian regiments.

The music scene in Niesky is rather weak. In addition to bands like Pax Dei, who celebrated their twentieth anniversary in 2006 and can offer a spectrum from children's concerts, choir and gospel to rock and even medieval music, there are some bands in the youth scene that are increasingly focusing on metal, hardcore, punk and Employ alternative rock and the folk band Rinser of Winds . Otherwise, music is practiced in the music school, in the HOLZ youth center and in the Niesky community center.

After 20 months of construction, the new ice rink was opened in October 2017. Thanks to the roofing, it can now be used regardless of the weather. The total costs amounted to 6.8 million euros, of which 1.9 million euros came from the city budget. It is located in the amusement park on Plittstrasse.

Niesky is located on the Węgliniec – Roßlau railway line , which was expanded and electrified to two tracks as part of the Lower Silesian Magistrale until 2018 between Knappenrode and the German-Polish border crossing at Zentendorf . In passenger traffic, the Görlitz – Niesky – Hoyerswerda line is served by the ODEG RB 64 line.

There is a connection to the nearby federal motorway 4 via the federal highway 115 . 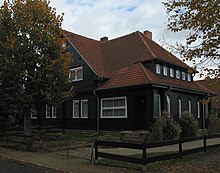 The traditional Höpner Lacke company goes back to the time of the Brethren . For a long time Niesky was characterized by the production of wooden houses, the most traditional company was Christoph & Unmack . During the GDR era, there were two large heavy industry plants here, the wagon construction plant and the MLK Lightweight Metal Combine (steel construction). More than 1,000 people were employed in each of the two plants. After the fall of the Wall, the workforce in both companies was reduced to such an extent that the “Emmaus” hospital in Niesky is the largest employer today.

In 1835 Johann Ehregott Christoph founded a craft business, which later became the wagon building business. The construction of rail vehicles began in 1917. From 1950, the focus was on special freight wagons (especially tipping, bulk goods, car transport and sliding wall wagons) as well as freight and passenger car components . In 1990 the company was privatized, from 1998 to 2005 Bombardier was the owner. In 2005 the company was spun off from the Bombardier Group as WBN Waggonbau Niesky GmbH . In 2006 the turnover was 36 million euros. Orders come from Austria, Switzerland, France and Sweden. After filing for bankruptcy in October 2007, DB Mobility Logistics AG became a partner in January 2008. With effect from July 2, 2008, the company was incorporated into the DB Group under the name DB Waggonbau Niesky GmbH as a wholly-owned subsidiary of DB Fahrzeuginstandhaltung GmbH. As a result, the bankruptcy proceedings could be lifted on August 11, 2008. Due to the poor order situation, DB sold the company to the Munich investor Quantum in mid-2014 . The company traded again as WBN Waggonbau Niesky GmbH and had around 300 employees who generated sales of around 34 million euros in 2014. At the beginning of 2015, the company received its largest order to date with the construction of three truck shuttle trains for the Eurotunnel worth EUR 40 million. In December 2017, the company filed for bankruptcy again. At the beginning of September 2018, the Slovak freight wagon manufacturer Tatravagónka took over wagon construction Niesky.

In addition, the Niesky GmbH dairy is located in Niesky, specializing primarily in the production of cheese. 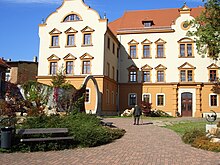 Niesky has two primary schools (one of them in the See district ), a secondary school and a grammar school with two buildings (grades 5 to 10 are taught in the building on Bahnhofstrasse and secondary level II with grades 11 and 12 is taught at Zinzendorfplatz). In addition, there is a special school, the district adult education center and a folk music school.

→ Main article : List of personalities from the city of Niesky

Cities and municipalities in the district of Görlitz