See ( Upper Sorbian Jězor ) is a village belonging to the East Saxon town of Niesky ( Görlitz district ). With the neighboring village of Moholz to the north , which was incorporated into See in 1938, See forms the eponymous district of See, which with just under 1,100 inhabitants is the largest of Niesky's districts after the core town.

Church by lake in winter

See is located about three kilometers west of Niesky city center on State Road 121 in the eastern part of the Upper Lusatian Heath and Pond Landscape Biosphere Reserve . To the north of the lake there is Moholz , to the east and south of the lake is surrounded by an extensive forest area, which separates the village from Niesky with a narrow strip. The Quitzdorf reservoir is located around one kilometer southwest of the town .

In the north of the district runs the Węgliniec – Falkenberg / Elster railway with stations in Petershain and Niesky, on which the Hoyerswerda – Görlitz connection is offered every two hours.

It is known from archaeological finds that people settled in the See region as early as the Middle and Neolithic Age . One of the best-known of these finds is a jug that is kept in the Görlitz municipal art collection. After it was found, it was marked with an inscription: This small funeral urn was found and dug up in the village of See in the sand, together with other large and small vessels of this type, in which the pagans hid the remains of the cremated dead and buried them in the sand out of unique piety the reign of noble von Nostitz in the year of the Lord 1732.

See is probably a Slavic settlement that was expanded by German settlers during the time of German colonization in the east . In the Meißner diocese register , the Parochie Sehe is mentioned in 1346 , a chapel probably already exists around the year 1200. With Ulrich de Sehe , a secular owner was first mentioned in a document around 1390.

The residents of Trebus complained to the Görlitz council in 1521 because they were very dissatisfied with the pastor of See. Your request to be re- parish for Hahnichen is granted.

The arrival of the Reformation is delayed by the landlord Gotzsche von Gersdorff , who is an opponent of Luther and strictly forbids his teaching among his subjects. He is said to have got into trouble later and to have become a promoter of the Lutheran doctrine, which found its way into the sea around 1540. Muskauer Simon Opitz is named as the first pastor in 1547 .

In the second half of the Thirty Years' War , the Electorate of Saxony won the two Lusatian margravates in 1635. The war time is stressful for See. In 1632 the plague raged in the parish of See , so the church had to remain closed and the pastor preached outdoors on a mountain between Sproitz and See, which is still reminiscent of the plague altar with the carved year. Probably during this time the parish of Horscha takes place . In 1640 the war-torn community is plundered and devastated by Swedish troops.

To the east of See, Niesky was founded in 1742 by Bohemian brothers. Around 1830 the Neu-See colony was founded, which is colloquially known as the sand because it is located on a mountain of sand.

After most of Upper Lusatia fell to Prussia as a result of the Napoleonic Wars in 1815, See was assigned to the newly founded district of Rothenburg (Ob. Laus.) The following year . As early as 1822, the municipality applied to the Prussian government commission in Frankfurt to regulate the termination of inheritance. It was not until 1841 that the peasant and manorial conditions and the peasant replacement of duties were regulated. 78% of the 787 hectares of land owned by Seer belong to the manor.

In 1874 the Mücka –Niesky section of the Kohlfurt – Falkenberg / Elster railway line was built. From 1884 on Sproitzer Bauernberg mined between Sproitz and lake basalt and quartzite. The majority of the workers are residents from the sea. Since 1890, the extracted material has been brought to Mücka train station via a railway line. Due to an increasing number of fatal accidents, dismantling had to be stopped in 1939.

After the war, the manor is expropriated. In the 1946 land reform, the land was distributed to Seer and resettlers. The Agricultural Production Cooperative (LPG) "Ernst Thälmann" was founded as early as 1952 . A convalescent home is opened in the manor house. In the administrative reform of 1952 Lake comes to district Niesky , district of Dresden . 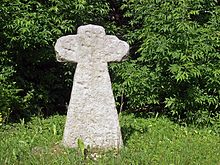 The church was last rebuilt in 1970. The top of the church tower built in 1886 with its four corner turrets is removed and replaced with a flatter tent roof.

On April 1, 1974, the municipality of See with Moholz was incorporated into the district town of Niesky.

During construction work in the autumn of 1997, a stone cross from the 15th or 16th century was found in See . This cross was put up again and the memorial was inaugurated on April 30, 1998 as part of the witch burn .

The largest employers in the post-reunification period are Straßen- und Tiefbau GmbH See and the agricultural cooperative See eG, which emerged from the LPG

In 1777 there were 3 farmers, 10 gardeners and 18 cottagers in See . Two economies are in desolation.

In the first Prussian population survey, in which all inhabitants are counted regardless of their social status, 297 inhabitants are determined in See in 1825. By the time the empire was founded in 1871, this number more than doubled to 679. With 651 inhabitants, the number in 1925 is only slightly lower, but during this period it fluctuates between 576 (1885) and 701 (1905). Moholz in 1925 the number with 703 inhabitants is slightly higher than that of See.

With the incorporation of Moholz, official population figures are only published for both places together. From 1354 inhabitants in 1925 the number rises to 1650 in May 1939. After the war, 1845 inhabitants are counted in October 1946. This number changed little until 1950, after which it began to decline. By 1964 the number of inhabitants decreased by around 250. In 1971 only a slight deviation was recorded, in the following 30 years the number fell again by around 250 to 300 inhabitants, so that in 2002 there were only 1353 inhabitants in See and Moholz can be determined.

The place name refers to a settlement on the lake. This was located behind the manor . The German name See is a direct translation of the Slavic name, which is rendered with Jězor in the current Upper Sorbian written language. With Jysor an earlier form of this name can be found in Abraham Frenzel in 1719 and in Christian Knauthe in 1767 .

Local and community parts of the city of Niesky (Niska)