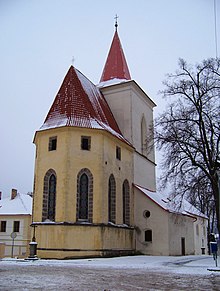 Jílové u Prahy , until 1950 Jílové , (German owl ) is a town in Okres Praha-západ , Czech Republic . The old mountain town is about 20 kilometers south of the center of Prague .

Jílové is located in the Euler Mountains ( Jilovská vrchovina ) in the gentle valley of the Svatováclavský brook ( St. Wenceslas brook ); to the west, north and east the town is surrounded by the Střed Čech Nature Park. State road II / 105 runs through the town from Jesenice to Neveklov , from which road II / 104 to Davle branches off in the city center . To the east and south of the city the Jílovský potok ( Euler brook ) flows through a deeply cut ground through which the railway line Čerčany – Vrané nad Vltavou runs; Jílové u Prahy train station is located below the city in the Kabáty district. To the north rise the Lípový vrch (458 m nm) and the Holý vrch (439 m nm), to the east the Drnka (436 m nm) and further the Grybla (514 m), in the southeast the Boží skála (413 m nm), south-west the Pepř (448 m nm) and west of the U Obrázku (446 m nm).

Eule was one of the most important medieval mining towns in Bohemia and the center of gold mining in the country, the other focal points of which were Reichenstein and Pomuk .

In the area around Eule there is evidence of an early settlement, and mining is said to have been carried out as early as Celtic times. The name of a place Ylou can already be found in 1045 . Another note can be found u. a. in the city register of the old town of Prague, in which the citizenship of Konrad Stadler from Gylowy was confirmed in 1310 . Owl was first mentioned in a document in 1331 in a document from Oldřich Zajíc von Valdek.

Charles IV raised owl to a royal city in 1350 and received u. a. the right to coin . The royal yields from the gold mines were so great that the founding and financing of the University of Prague could be disputed from them. In the 14th century the Prague citizen Jan Rotlev ( Johann Rothlöw ) u. a. Gold mines in Owl. The royal Bohemian mint master initially invested his fortune in the mines without success; When he won half a ton of gold within six months by finding a large gold vein, Rothlöw became the most successful mining company in the city's history.

The city's heyday did not last long. During the Hussite Wars , the daytime facilities of the mines and the Minorite monastery were destroyed and the pits were drowned. Vladislav II promoted the ailing city. In addition to confirming the old privileges, he added the Bohemian royal crown and a W for his name to the city's coat of arms .

The reputation of the Golden Mountain City also drew the alchemist Edward Kelley to Eule. In 1590 he bought the mint and other houses in the town and the fortress Včelní Hrádek and the estates Libeř and Libeň .

Owl was thrown back by the Thirty Years War . After the Battle of White Mountain , many Protestants left the city because of the incipient recatholization . In 1626 a monastery of the Minorites was rebuilt in Eule by the brothers Stephan and Georg Benik . During the war years, large parts of the city were burned down and devastated. Gold mining was resumed in the middle of the 17th century, but it no longer achieved its former importance. The St. Wenceslas Bath was opened in 1749 at the long-known iron and sulfur-containing mineral spring west of the city. The municipal Meierhöfe Hradek, Radlik and Neuburg were emphyteutically sold in the 18th century. In 1785, Emperor Joseph II abolished the Minorite monastery and the Minorite Church of Maria vom Loretto; the land was released for demolition and five town houses were built in their place.

In 1843, mostly Czech-speaking people lived on the manor of the royal gold mining town Eule, which belonged to the Kauřim district, with its villages in 1966. The main sources of income were agriculture, trade and, to a lesser extent, trade and mining and flax and wool spinning. The agricultural area covered 1672 yoke 1308 square fathoms. Hunting in the urban forests was leased to the episcopal lordship of Lower Břežan . Under the direction of the mountain jury Spoth, the kk aerarium was still operating experimental buildings on gold. In addition to the town of Eule, the manorial estate includes the villages of Kabaty, Kalter Grund, Pochmühle and Radlik.

The town of Owl itself at that time consisted of 185 houses in which 1462 people lived. Five annual markets and two weekly markets were held in Eule. The parish church of St. Adalbert, the parish and the school were under the patronage of the magistrate. There was also a town hall and a municipal brewery in the city. Outside were the Corpus Christi Church and St. Wenceslas Chapel at the bathhouse. The villages of Kabaty, Kalter Grund, Pochmühle, Radlik, Luk, Podlauč, Boholib, Petrow , Kamený, Wrata, Obora, Borek, Augezdetz ( Kamenný Újezdec ) and Přiwoz were parish after Owl . Traditionally, Eule was also the seat of a mining court substitution subordinate to the Mining Authority in Příbram , which, however, hardly had to take any action due to the fact that mining was reduced to experimental constructions.

In the course of the replacement of patrimonial in Bohemia, Eule became the seat of a district court in 1849 . The districts Kabáty, Luka, Podloučí, Radlík, Studené, Svatováclavské Lázně and Žampach belonged to the city. In 1850 the new political district Eule was formed from 48 cadastral communities. From 1869 the city belonged to the Karolinenthal district and from 1878 to the Königliche Weinberge district . In 1891 the citizen Leopold Čihák left his private collection to the city on condition that a city museum be established. At the end of the 19th century, railway construction began in the Vltava and Sasau valleys . After the section from Tschertschan to Krehanitz went into operation in 1897, the entire railway line to Prague was finally completed in 1900 . In preparation for the incorporation of the city of Královské Vinohrady / Royal Vineyards into Prague, a branch of the Royal Vineyards District Commission was set up in 1921 in Jílové / Eule. In 1925 the district, which included 42 parishes, was renamed Okres Jílové / District Owl. On June 1, 1942, Jílové / Eule lost its status as a district town; the districts Eule and Ritschan were combined to form the new district Prague-Land-Süd / Okres Praha-venkov-jih with headquarters in Prague. After the end of the Second World War, the Okres Jílové was rebuilt on November 27, 1945.

In the course of the territorial reform of 1949, the Okres Jílové was repealed, the city was assigned to the Okres Praha-východ . 1950 was a municipal division, in which the municipality Luka pod Medníkem with the districts Podloučí and Dolní Studené arose. The remaining municipality, in which the districts Kabáty, Radlík, Horní Studené and Žampach remained, was given the new name Jílové u Prahy . Jílové u Prahy has been part of Okres Praha-západ since 1960 . In 1961 Borek was incorporated. In 1980 Luka pod Medníkem was incorporated again.

In 1992 Jílové u Prahy was declared an urban monument zone.

The municipality is divided into the cadastral districts of Borek nad Sázavou, Jílové u Prahy and Luka pod Medníkem. 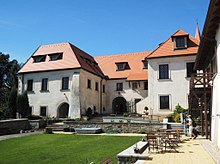