Simmozheim is a municipality in the Calw district in Baden-Württemberg . It belongs to the Northern Black Forest region and the edge zone of the European metropolitan region of Stuttgart .

Simmozheim is located 423 to 589 meters above sea level on the federal highway 295 between Weil der Stadt and Althengstett , in the Heckengau and Schlehengäu . The community consists of two separate areas.

Until the 20th century

In a forest near Simmozheim, the remains of a Roman brick factory were discovered.

Simmozheim was first mentioned in a document in 985. From 1320 the place belonged to the Lords of Kröwelsau . In 1626 76 people died of the plague, in 1634 44 buildings were destroyed by fire in the Thirty Years War. In 1699 Waldensians came to the village as religious refugees, after a short time they were settled in today's Neuhengstett , which was founded in 1700. Simmozheim had to cede parts of its district to Neuhengstett and has since been divided into two unconnected areas. In 1808 Simmozheim came to the Oberamt Calw .

Around 1900 most of the residents were day laborers and small farmers. On April 16, 1945, six people lost their lives in an air raid.

Before the Reformation, the parish was an early mess and always had its own pastor afterwards; except in 1630, when the pastor at that time was dismissed as a result of the edict of restitution and the community was taken care of from Möttlingen. The parish was also without a pastor in the years 1636–1651, when the population was weakened by the Thirty Years' War. At that time the place belonged to Althengstett. With the introduction of the Reformation in Merklingen , Simmozheim also became Protestant in 1535 . Today's Protestant parish includes the parish of Simmozheim and the Büchelbronn district, which was founded in 1802. It belongs to the church district Calw-Nagold in the Evangelical Church in Württemberg .

In addition to the facilities of the Protestant parish, there is a parish hall of the Liebenzeller community . Approx. 500 residents are Catholic . In addition, a Kingdom Hall of Jehovah's Witnesses was built around 1960.

Simmozheim has two kindergartens, one with toddler care , and a primary school with all-day care. The former forest kindergarten in the Simmozheimer Justice Forest was taken over by the Althengstett community in 2013. A secondary school, a Werkrealschule and a secondary school are available in the neighboring town of Althengstett , as well as grammar schools in the next towns of Weil der Stadt and Calw .

Simmozheim is crossed by the Gäurandweg , a long-distance hiking trail run by the Black Forest Association . Furthermore, the Huguenot and Waldensian Trail, a cultural route of the Council of Europe , leads through the town. 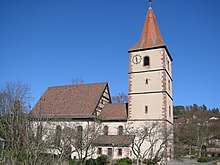 The Evangelical Trinity Church is the most striking landmark of the place. It stands slightly elevated on the northern edge of the valley floor. At night, too, its square tower is brightly lit and can be seen from afar. In 1299 the predecessor church came to Württemberg as Count Vaihingen's fiefdom of the Urbach family. In 1391 the Stuttgart monastery bought the Simmozheim church, probably donated by a member of the Conz family, from Pfaff Konrad von Weil. In 1482 the church was sold by the Stuttgart monastery to the Herrenalb monastery for 1200 guilders. In 1497 the monastery replaced the dilapidated church with a new building. The small nave between the nave and the tower still bears witness to this church. According to old descriptions, it was surrounded by a wall and a moat.

A large nave was added to the existing small nave in 1748. The old tower remained standing then and was rebuilt from 1758 to 1766 after a lightning strike. Originally the church with the gallery had 350 seats. The last exterior renovation took place in 1963 and was carried out by architect Werner Hermann Riethmüller under the artistic direction of Professor Rudolf Yelin the Elder. J. also an extensive interior renovation to take place in 1964, with the main entrance was moved from the west side to the east side of the tower. After the community gallery was removed and the organ gallery significantly expanded, Yelin's altar, baptismal font (now replaced) and pulpit found their place on the west side. His large, silver cross in front of a colored background (representation of the heavenly Jerusalem) is now the eye-catcher behind and above the altar. These changes were intended to symbolize a completely new beginning after the Second World War. The church also received new glazing and electric heating. The two large bells from 1524 and 1525 come from the Sydler bell foundry in Esslingen. A third from 1889 had to be delivered during the Second World War. In 1984, when the wooden bell cage was replaced by one made of steel, two new, smaller bells were commissioned. At Easter 1985 the four-note bell rang for the first time. The pneumatic organ from the Esslingen company Weigle dates back to 1907.

The parish has had a parish hall since December 1994, which was built in the former parish garden next to the rectory.

Wikisource: Simmozheim  - in the description of the Oberamt Calw from 1860

Cities and communities in the district of Calw