Edge heights and drainage areas in the Neckar basin

The Neckar Basin is a landscape in Baden-Württemberg . Its plateau stretches with varying width roughly from Ludwigsburg in the south to Gundelsheim on both sides of the Neckar valley . From a natural point of view, the Neckar basin is part of the main unit 12 = D57 Neckar and Tauber-Gäuplatten in the south-west German layer level country and has number 123 in the systematics of the manual of the natural structure of Germany .

The Neckar basin has roughly the shape of an isosceles triangle with the Neckar as the central axis. While the base extends westwards along the Enz to Mühlacker and eastwards along the Rems to Remshalden , the point in the north lies roughly at Gundelsheim. The natural area has an area of ​​1,327 km² and 1,122,000 inhabitants (population density: 847 inhabitants / km²).

The surrounding natural areas, seen from the north clockwise, are:

The main natural area of ​​the Neckar Basin is structured as follows:

The allocation of unit 123.11 and the north of 123.62 to the Neckar basin is partly controversial.

The high plateau of the Neckar basin lies at a height of 200  m to 350  m and is covered by loess . The loess layers are particularly thick along the Neckar valley and decrease towards the edge zones. The shell limestone below is often cut deep and winding by numerous river valleys such as those of Neckar, Enz , Rems and Schozach . Wunnenstein and Hohenasperg are witness mountains of the surrounding Keuperbergland .

The basin is framed in large parts by Keuper mountain landscapes such as the Swabian Forest or the Stromberg . In the southeast are the Backnang Bay and the Schmidener Feld . In the south, the area gently merges into other gauzes , for example from the Lange Feld over the Stroh- and Heckengäu to the Korngäu . 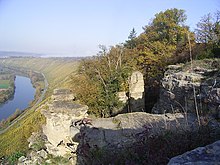 The Neckar basin is climatically characterized by long hours of sunshine , high average temperatures and low amounts of precipitation . Due to frequent inversion weather conditions and low wind speeds close to the ground, the region suffers from low air exchange and therefore from high pollution of the air , especially since emissions from industry and traffic are particularly high.

The area is drained by the Neckar. Its main tributaries are the Enz with the Metter , Kirbach , Glems and Schmie as well as the Zaber in the west and the Rems, the Murr with the Bottwar and the Schozach in the east . Some of the large bodies of water are critically polluted , just as often the groundwater is caused by nitrates from intensive agriculture .

Use of the soil

The deeply incised steep slopes of the rivers, which enable viticulture in steep slopes , are characteristic of the Neckar basin . The mighty loess layers along the river valleys allow intensive arable farming. In many places, the shell limestone is extracted from quarries , and to a lesser extent, brickworks raw materials ( clay , silt , loess and marl ).

View from Cleebronner Michaelsberg over the Neckar basin towards Heilbronn, on the right in the background the foothills of the Löwenstein mountains

Due to its location and nature as a transit area and the favorable climatic conditions for arable farming, the Neckar basin was populated early on. Today 18% of the landscape is settlement area, 69% open land and 12% forest area. Because of its location in the metropolitan area of the Central Neckar area, 67% of the area include the densely populated areas Stuttgart, Heilbronn and Pforzheim on. With a population density of 847 inhabitants per km², the area is one of the most densely populated areas in Baden-Württemberg today; around 1.1 million people live in it. A regional center in the Neckar basin is Heilbronn, medium centers are Backnang , Mühlacker, Vaihingen an der Enz and the dual centers Waiblingen / Fellbach , Ludwigsburg / Kornwestheim and Bietigheim-Bissingen / Besigheim .

The landscape of the Neckar basin is severely cut and noisy due to the dense settlement and numerous traffic routes . Important roads in north-south direction are the A 81 (Stuttgart – Würzburg) and the B 27 (Stuttgart – Mosbach), in east-west direction the A 8 (Stuttgart – Pforzheim) with the parallel B 10 , the B. 14 (Stuttgart – Schwäbisch Hall) and the B 29 (Waiblingen – Aalen). The Neckar is developed as a federal waterway .