Straightened rivers with dams are often difficult for animals to cross

The terms landscape, open space or area fragmentation , which are mostly used synonymously , denote the spatial separation of landscape elements and / or grown ecological connections in the area. It is not to be confused with urban sprawl , which can also have a separating effect. In addition to the expansion of built-up settlement areas, the fragmentation of the landscape is primarily due to traffic routes (roads, railway lines, canals) and other infrastructure measures (e.g. high-voltage lines , fences ).

Effects on flora and fauna

The fragmentation has the consequence that animal and plant populations are separated from each other. Depending on the width of the separation, contacts can be difficult or even complete isolation. The remaining areas can prove to be too small for a species to survive. Depending on the type of living being, the width and type of separation had different effects. Even the narrowest path can turn out to be an insurmountable lane for reptiles .

The landscape fragmentation by traffic aisles, z. B. on dams or in ditches , or through settlement bands, not only has negative consequences for fauna and flora , but also for the microclimate . The structures represent obstacles that separate, divert or at least hinder and brake cold and fresh air corridors. The fragmentation also has negative effects on the water balance , the landscape and the recreational value.

The higher the value for the effective mesh size, the less the landscape in this area is cut up. As expected, low values ​​can be found in sparsely populated regions, as the map of the IOER Monitor shows.

The extent of the landscape fragmentation is determined by determining and mapping the effective mesh sizes.

The parameter “effective mesh size” was developed by Jaeger (1999) and is suitable for comparing the division of areas of different overall sizes or with different proportions of settlement and traffic areas. The area size of the uncut rooms is set in relation to the total area. This method can be used to determine whether any two points located anywhere in an area are still in the same partial area after the area has been divided. The effective mesh size can therefore also be interpreted proportionally to the probability that two randomly selected points lie in the same uncut free space.

An effective mesh size with the value 0 means that an area is completely crossed by roads or built up by settlements. High values ​​are achieved when areas have few or no separating elements. In this case the value corresponds to the area size of the respective area. Habitats with a high effective mesh size are, for example, the Alpine region, the mouth of the Elbe and the neighboring Schleswig-Holstein marshes as well as the North Brandenburg plateau and hill country.

The degree of fragmentation is mainly influenced by population density and topography . Among the uncut open spaces, the large uncut areas with a size of more than 100 km² are of particular importance for the preservation of biodiversity and the safeguarding of the natural assets of soil , water , air and climate . With regard to the diversity of species, it is particularly important that, in uncut spaces of this size, a genetic exchange of animal and plant species is still relatively undisturbed.

The analysis of the long-term development z. B. in Baden-Württemberg showed that the degree of fragmentation increased sharply between 1930 and 1998 and the value of the effective mesh size decreased accordingly. The average national value decreased from 22.9 km² to 13.7 km² (decrease of 40%). Accordingly, the number of uncut open spaces over 100 km² has decreased from 11 (4.2% of the land area) in 1930 to 6 (2.1% of the land area) in 1998, with no further decline in number and total area from 1989 onwards is.

In the IOER monitor , nationwide indicators for landscape fragmentation (e.g. uncut open spaces> 50 km² and> 100 km² as well as effective mesh size) are provided. The routes of the supra-local transport network (road and rail) are seen as the elements of division of the open space . In addition to all circular and higher-classified roads, all operating double- and multi-track railway lines and electrified single-track lines are among the elements that lead to the fragmentation of a landscape. 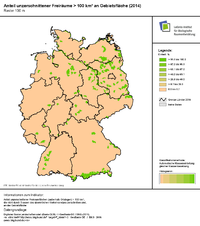 From a nature conservation point of view, it is alarming that particularly small values ​​- i.e. a high influence on the open space functions through fragmentation - occur not only in large (urban) cities and agglomeration areas, where they would be expected, but also in less densely populated rural districts. About 30% of all territorial units no longer have a share of uncut open spaces larger than 50 km². In the ecologically particularly valuable areas of over 100 km² it is around 66%. However, it should be noted positively that the proportion of uncut open spaces over 100 km² has remained stable on the national average since 2008.

For several years, attempts have been made to mitigate the effects of the fragmentation of the landscape by means of so-called animal crossing aids , such as green bridges over and amphibious tunnels under roads. However, only the abandonment of further landscape-cutting construction measures could really prevent the effects from intensifying.