Both the salts and the esters of nitric acid (HNO 3 ) are referred to as nitrates .

The salts have the general composition M I NO 3 (M I : monovalent cation ). Some of the salts are given the common historical name of saltpeter. The planar anion NO 3 - carries a negative charge.

The mesomeric stabilized nitrate anion.
The total charge is -1.

The esters of nitric acid are also called nitric acid esters and have the general structure R – O – NO 2 (R: organic residue).

Some nitric acid esters are mistakenly called nitro compounds, e.g. B. Glycerin trinitrate as nitroglycerin. In contrast to nitrates, nitro compounds (R – NO 2 ) have a CN bond.

The nitration is built planar. All bond angles O-N-O are 120 °. The bond lengths of the N – O bonds are also of the same length and lie between the lengths for single and double bonds. The real structure of the nitrate ion must therefore exist between three mesomeric boundary structures :

As an element of the second period, nitrogen has no octet expansion , so that the mesomeric boundary structures are present with positive and negative charges.

With the exception of the bismuth oxide nitrate BiONO 3 , the salts are readily soluble in water and play an important role as nutrients for plants. Nitrate anions themselves are largely non-toxic. Toxicity limits for mammals and humans are in the same order of magnitude as those for chlorides and sulfates , namely in the double-digit gram range. However, as with all salts, large amounts lead to osmotic problems (see: Osmoregulation ). Nitrates in the milligram range are used as food additives .

Alkali nitrates are used as oxidizing agents e.g. B. used in black powder .

Nitric salts are easily accessible by reacting nitric acid with , for example, hydroxides , carbonates , metals or the like:

Conversion of nitric acid with barium hydroxide to barium nitrate and water.

Conversion of nitric acid with zinc to zinc nitrate , water and nitrogen monoxide .

Nitrates can also be obtained through complete oxidation of nitrogen compounds such as nitrites , ammonia or hydroxylamine . 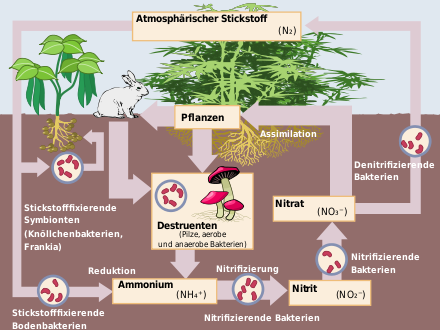 Nitrates are ubiquitous in the biosphere and hydrosphere, mainly in the form of sodium nitrate . Because of their high solubility, nitrates only accumulate in large quantities in a few specific locations. Large nitrate deposits worth mining are therefore rare. They are found in deserts with a long-lasting hyperarid climate such as the Atacama Desert in Chile (approx. 2 × 10 8 t ), in the Turpan Depression in northwest China (approx. 2.5 × 10 8 t ), in the McMurdo Dry Valleys in Antarctica and in the Mojave in the USA. There are other sites in Egypt, Asia Minor and Colombia. Nitrates of the common alkali and alkaline earth metals occur naturally as chile, lime or potash nitrates .

Formation and breakdown of nitrates

In contrast, when there is a lack of oxygen, bacterial denitrification of nitrate leads to elemental nitrogen . These implementations are z. B. systematically used in sewage treatment plants to remove nitrogen compounds.

Nitrate acts as an efficient oxygen donor. That is why potassium nitrate is a component of black powder (explosive nitrate ). If necessary, nitrates of other cations are also used, mostly when colored light effects are desired in pyrotechnics ; z. B. barium (green), and strontium nitrate (red). Barium nitrate is also used in sparklers without creating a noticeable flame color.

As a food additive is sodium nitrate (E 251) and potassium nitrate (E 252) as a preservative z. B. used for curing meat and sausage products, as it inhibits the growth of anaerobic germs through the formation of nitrite.

Nitrates cause an enzymatic release of the blood vessel-widening nitric oxide (NO) in living organisms and are therefore used in medicine (e.g. for the treatment and prevention of angina pectoris attacks and in the treatment of severe acute cardiac insufficiency ), including the drugs nitroglycerin or isosorbide mononitrate for vasodilation ( see also NO donors ).

Nitrates are used as nutrients by plants and used as fertilizers in agriculture . They can be taken up and used directly by plant organisms as a nitrogen source. 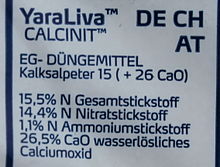 In agriculture, nitrates than are fertilizer , in the form of slurry (gen. Manure ) are used. These farm fertilizers contain nitrogen partly as nitrate (calcium nitrate in blue grain) and partly as ammonium compounds (ammonium nitrate, ammonium phosphate), but often also in the form of organic nitrogen compounds (proteins, amines, urea). With the help of bacteria, nitrification creates nitrate from ammonium ions (NH 4 + ) in the soil via the intermediate stage nitrite. The organically bound nitrogen can be mineralized in the soil (release of ammonium compounds and ultimately also nitrate) or enter the soil humus supply, from which it is gradually mineralized again (generally 1 to 3% mineralization rate per year).

In particular, as a result of the manure management (in subordinate quantities also through excessive fertilization, e.g. when growing different types of vegetables or in private house gardens as well as through leaky sewer pipes) the nitrate content of the groundwater has increased significantly in the past decades. Legal regulations on the type, amount and time of fertilization as well as corresponding training and remediation measures are intended to lead to a gradual, albeit strongly delayed, remediation of the groundwater.

The cause of health risks lies in the danger of a reduction in nitrate to nitrite and the formation of carcinogenic nitrosamines . Such a conversion takes place on the one hand in the intestine by appropriate bacteria, on the other hand the salivary glands can also reduce nitrate washed up in the bloodstream. The infant's intestinal flora (like the intestinal flora of an adult) can contain nitrite-producing bacteria. The resulting nitrite oxidizes the hemoglobin to methemoglobin , which the infant cannot reduce back to hemoglobin due to its not yet fully developed reducing capacity, so that the infant suffocates from within. In ruminants , too, there is an acute risk of nitrite formation due to nitrate reduction in the rumen . Here even nitrate concentrations of over 20 mg / l in drinking water are considered harmful.

The current limit for NO 3 - in drinking water is, according to the German drinking water regulations at 50 mg / l. In Switzerland there is a maximum value of 40 mg / l. In Austria, the limit value for nitrate according to the Drinking Water Ordinance is also 50 mg / l, but the condition [NO 3 - ] / 50 + [NO 2 - ] / 3 ≤ 1 must be observed here (the values ​​in square brackets indicate concentrations calculated in mg / l). Water that exceeds this limit value is often mixed with water that is low in nitrate by water suppliers in order to comply with the limit value. Recently, the first water treatment systems with reverse osmosis or nanofiltration have been built in order to lower the nitrate value in drinking water through partial desalination.

The higher the nitrate level, the higher the risk of colon cancer . An increase in risk can already be seen at nitrate concentrations that are well below the legally prescribed limit values. There is a risk for infants and for people with degenerate intestinal flora due to the possible formation of nitrite . Mainly, however, the limit values ​​for nitrate serve as indicator values ​​for a general pollution of drinking water sources with nitrogenous organic pollution, which should remain contained (see paragraph on philosophy of limit values ​​in the Drinking Water Ordinance ). In 2014, the EU initiated infringement proceedings against Germany due to excessive nitrate levels in groundwater. Another procedure is being prepared.

At the end of 2015, the Advisory Council for Environmental Issues (SRU) spoke out in favor of developing a national nitrogen strategy, because 27% of all groundwater bodies are in a poor chemical condition due to the excessive nitrate content. Nitrate in the fermentation residues from biogas plants can also pollute the groundwater if the quantities applied exceed the needs of the plants . For this reason, digestate should be separated and nutrients exported from the region if the amount of liquid manure and digestate exceeds the nutrient requirements in the region. With the aim of lowering nitrate levels in groundwater and thus averting fines from the EU, the fertilizer ordinance in Germany was tightened in 2017 . In some regions the nitrate limit values ​​are still being exceeded, so that Germany has to act again. In Switzerland, too, the limit values ​​are still not always observed.

Saltpeter, probably developed through dissimilation from Middle High German / Middle Latin salniter , composed of Latin sal , 'salt', and Egyptian nṯr (.j) , 'soda'. There is then a relationship with Hebrew neter and German "Natron". In the German dictionary of the Brothers Grimm, the interpretation is traced back to the Latin sal petrae , "rock salt", "rock salt". Saltpetre is the common name of some common nitrates. A distinction is made between the following types of saltpetre:

In nature they can arise in different ways. Saltpetre forms in arid , hot, vegetation-free areas during the biochemical decomposition ( oxidation ) of nitrogenous organic substances ( guano and other excrement from birds and other animals), as well as microalgae, nitrogen bacteria and the like. a.

Furthermore, it can be formed by atmospheric nitrogen fixation and the corrosive effects of nitric acid on debris on the desert floor. Nitrates arise from tuffs in extensive Liparit formations.

In earlier times the manufacturers of the nitre were called nitric boilers. Historically, potash and Chile nitrate are not only important as oxygen donors in explosive nitrate (black powder). Until the discovery of the Haber-Bosch process for the production of ammonia, saltpeter was the only source of large amounts of nitrogen compounds, especially for nitrate fertilizers and nitric acid . It was shipped worldwide (see saltpeter trip ). Therefore, conflicts arose over this raw material until the 20th century. B. the saltpetre war in South America from 1879 to 1884. Several peasant revolts in the Hotzenwald led to the saltpetre riots in the 18th and 19th centuries . The saltpetre promise , a contract between Carl Bosch and the Supreme Army Command from 1914, was intended to enable the synthetic production of saltpetre on an industrial scale.

The reaction with sulfuric acid and salicylic acid leads to an intensely yellow reaction product, which according to DIN 38405-29 (German standard procedure D29), modified according to ISO 7890-3, can be used for a sensitive determination of the nitrate content in water samples.

Table tennis balls made from celluloid - a nitric acid ester

Organic nitrates - the nitric acid esters - are compounds that can decompose explosively . The esters of polyalcohols are therefore used as explosives (e.g. nitropenta , pentaerythritol trinitrate or glycerol trinitrate ). Cellulose nitrate with different degrees of nitration is used in pyrotechnics , is a component in nitrocellulose lacquers ( nitrocellulose lacquers ) and in celluloid .

Esters of nitric acid are obtained by esterifying an alcohol with concentrated nitric acid. The formation is spontaneous and slightly exothermic. It only requires a little concentrated sulfuric acid as a catalyst.