The district of Waldshut ( Alemannic : Waldshuet ) is one of the four southern districts of Baden-Württemberg on the border with Switzerland . It belongs to the Hochrhein-Bodensee region in the Freiburg administrative region . The administrative seat is the district office in Waldshut-Tiengen .

The district of Waldshut in the Hochrhein region comprises parts of the southern Black Forest including the Hotzenwald , the lower and middle Wutach Valley and the west of the Klettgau .

In the south, the Rhine forms the district boundary, its largest tributaries (counting down the Rhine) are the Wutach , the Schlucht , the Schwarza and the Alb .

See also : List of places in the district of Waldshut

Until 1803 the largest part of today's district, the Hotzenwald or the county of Hauenstein , belonged to Upper Austria , together with the neighboring Frickgau, the oldest possessions of the Habsburgs . The forest bailiff , based in the forest bailiff's office, had the administrative tasks . In addition, there was the Landgraviate of Klettgau, which was initially largely part of the Habsburg family, then belonged to the Counts of Sulz and later to the Prince of Schwarzenberg , with the administration in Tiengen Castle and Jestetten Castle , ultimately from Krumau . The Landgraviate of Stühlingen , which last belonged to the Prince of Fürstenberg , was administered from Stühlingen Castle , later from Donaueschingen Castle . The county of Bonndorf and the dominion of Blumegg were directly part of the empire, but were subordinate to the St. Blasien monastery, while the monastery itself belonged to Upper Austria. On the Rhine there was the Obervogtei Rötteln around Hohentengen , which belonged to the Hochstift Konstanz . The Rheinau monastery and the Säckingen monastery also had larger possessions . None of the former monasteries exist anymore, the Marienburg monastery (1862) in Ofteringen and the Stühlingen Capuchin monastery (1927, forerunner 1743 to 1802) are newly founded.

Between 1803 and 1806 the entire current district area came to Baden , in 1945 to southern Baden and with this in 1952 to the state of Baden-Württemberg . The offices of Waldshut, Bettmaringen , Bonndorf, Klein-Laufenburg, Jestetten, Nollingen , St. Blasien, Säckingen, Stühlingen, Schopfheim, Tiengen and Wehr were created there in today's district area (1809) . The western offices belonged to the Wiesenkreis based in Lörrach, since 1815 to the Dreisamkreis based in Freiburg and since 1832 to the Upper Rhine District . From 1813, the eastern offices were assigned to the Seekreis based in Constance. The division of office changed often in the sequence. The Wehr office was dissolved in 1813, Laufenburg and Tiengen in 1819, Stühlingen and Jestetten in 1856. St. Blasien lost its official status in 1924, Schopfheim in 1936. In what is now the district in 1936, only the offices of Neustadt in the Black Forest, Säckingen and Waldshut remained. In 1939 the Baden administrative order was transferred to the Reich-wide system of counties and administrative districts. Thus the districts of Säckingen , Waldshut and Neustadt emerged from the three remaining offices . The latter changed its name in 1956 to the Upper Black Forest district . Initially, the district of Waldshut belonged to the administrative district of South Baden .

After the end of the war in 1945, the Waldshut district became part of the French occupation zone .

Schlageten from the district of Säckingen was added on January 1, 1971. On May 1, 1972, Mettenberg was temporarily assigned to the Upper Black Forest district.

On September 1, 1973, Schönenbach was reclassified to the Breisgau-Hochschwarzwald district. Grünwald followed on March 18, 1975 (reclassification from Bonndorf in the Black Forest to Lenzkirch ).

Since the completion of the community reform , the district of Waldshut has comprised 32 communities, including 7 towns and of these, in turn, a large district town , Waldshut-Tiengen, which is also the largest town in the district. The smallest municipality is Ibach . Since many small communities with little industry and commerce belong to the Waldshut district, it is considered one of the poorer districts in Baden-Württemberg.

The population figures are census results (¹) or official updates from the Baden-Württemberg State Statistical Office (main residences only).

The district council is elected for five years by those entitled to vote in the district. The local elections on May 26, 2019 led to the following result:

Divided by a silver sloping bar: at the top in green a sloping golden abbot growing from the rear edge of the shield; below in blue a golden turbine wheel. The coat of arms was awarded on December 11, 1973 by the Ministry of the Interior of Baden-Württemberg .

The turbine wheel represents the important role that electrical energy plays in the economic development of the Upper Rhine. The wave bar symbolizes the rivers Rhine , Wehra , Murg , Alb , Schwarza , Schlücht , Steina and Wutach , which run through the district. The abbot refers to the monastic foundations in the district.

See also : List of coats of arms in the Waldshut district

On May 30, 2011, a third and, for the time being, last project section was completed in which visual artists from the region - including Cordula Güdemann and Kolibri - designed flags for a total of 32 points at the Waldshut district border .

The district is largely characterized by medium-sized companies. 85% of the employees work in companies with fewer than 100 employees.

In the service sector, health, veterinary and social services, trade, tourism, logistics and energy supply dominate. The main focus in the manufacturing industry is metalworking, machine and vehicle construction, the chemical and textile industry as well as wood and plastics processing. With around 2,000 companies and 20,000 employees, the trade represents a strong pillar of the economy. Tourism and health care are important economic factors, especially in the Black Forest and the Upper Rhine. With 433,446 guest arrivals (2010) and 1,974 million overnight stays, the district of Waldshut is one of the most important tourist destinations in Baden-Württemberg.

STo AG has developed into the top-selling company in the district (2012).

In the future atlas 2016, the district of Waldshut was ranked 183 out of 402 districts, municipal associations and independent cities in Germany and is therefore one of the regions with a "balanced risk-opportunity mix" for the future. In the 2019 edition, it was ranked 174th out of 401.

The Hochrheinbahn, built by the Baden State Railway , runs along the Upper Rhine as the main line from the Badischer Bahnhof in Basel to Schaffhausen or Singen (Hohentwiel) . This reached Waldshut in 1856, from where a connecting line over the Rhine to the Swiss Koblenz AG was built in 1859 , and Schaffhausen in 1863.

Since this important line runs through the national territory of neutral Switzerland, the Wutach Valley Railway, opened in 1875/76 from Lauchringen via Stühlingen to Weizen, was extended in 1890 with elaborate engineering structures as a strategic route via Zollhaus-Blumberg into the Danube Valley. In the same year, the Bad Säckingen - Schopfheim line was also built for military reasons .

In 1907 the climatic health resort of Bonndorf was connected to the Höllentalbahn via the Kappel Gutachbrücke station .

The main line Schaffhausen - Zurich , which was put into operation by the Swiss Northeast Railway in 1897, is a specialty . Today it belongs to the Swiss Federal Railways and has three stations in the district.

This includes the following three municipalities:

Altenburg-Rheinau station has not been served since the end of 2011.

Of the 115 kilometers of rail network, 31 kilometers have been closed for regular passenger traffic:

By the district lead portions of the under construction A 98 and a plurality of highways, including the B 34 as part of the European route 54 of Lörrach - Waldshut-Tiengen - singing of Swiss area in Schaffhausen to the A4 and the access road to the A 81 serving B 314 from Waldshut-Tiengen- Blumberg - singing about the German area of ​​the Randen . The B 500 from Schluchsee - Höchenschwand - Waldshut is also important. Furthermore, several state and district roads open up the district.

The border with Switzerland is an essential part of the structure of the Waldshut district, it has a long history that connects and divides. During the First World War and the Second World War, it was particularly secured by the occupation of the border . Switzerland's border fortifications are still visible today .

Even after Switzerland has joined the Schengen Agreement , the state border between Switzerland and Germany will be monitored. The movement of goods between the Swiss customs area and the EU customs area is controlled . This is done by the Swiss Border Guard and the Federal Customs Administration.

Other schools in the Waldshut district are:

The district of Waldshut is the sole shareholder of the hospital in Waldshut called Klinikum Hochrhein after the Bad Säckingen hospital was closed at the end of 2017. A Hochrhein Health Park in Albbruck has been in the planning process as a central clinic since 2020 .

The Loreto Hospital in Stühlingen still exists . The district also operates a nursing home in Jestetten in the form of its own business .

The district office of Waldshut (including branch offices and own operations) has become the largest employer in the district on January 1, 2005 after the integration of the special authorities.

The district archive of the Waldshut district in Albbruck has existed since July 1, 1991 .

There are three 380 kV substations in Tiengen, Gurtweil, Kühmoos and five pumped storage plants in Waldshut, Witznau, Häuser, Wehr and Bad Säckingen in the district. Environmentally friendly energy is generated in river power plants on the Upper Rhine and on smaller rivers. The wind power is used in Bonndorf. 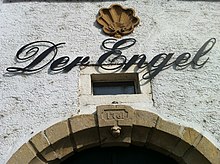 The angel in Rheinheim. In the portal above the " scallop "

Traditional inns in the district are with documentary evidence ...

Municipalities before the district reform 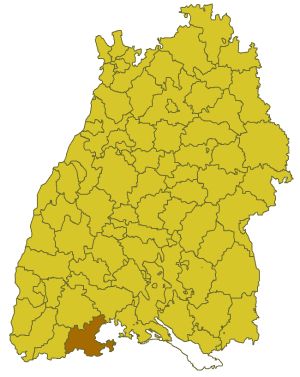 Waldshut district before the district reform

Before the district reform on January 1, 1973 or before the community reform, the (old) district of Waldshut had a total of 81 communities since 1936 , including the three cities of Stühlingen, Tiengen (Upper Rhine) (from September 3, 1964 Tiengen / Hochrhein ) and Waldshut.

The largest municipality in the old district of Waldshut was the district town of Waldshut. The smallest community was Staufen.

The old district of Waldshut included last an area of 590 square kilometers, and had in the census in 1970 a total of 71,975 inhabitants.

The table shows the population development in the old district of Waldshut up to 1970. All population figures are census results.

In the table, the municipalities of the old district of Waldshut are before the municipal reform. All communities still belong to the Waldshut district today.

On July 1, 1956, the district was assigned the distinctive sign WT when the vehicle registration number that is still valid today was introduced . It is still issued today.

Until the 1990s, vehicles from the old district of Säckingen received license plates with the letter pairs AA to KY and the numbers from 100 to 999.

The previous SÄK distinguishing mark of the district of Säckingen has not yet been reintroduced.

Counties and independent cities (1938–1972) in Baden-Württemberg

Nature reserves in the Waldshut district

Lists of natural monuments in the Waldshut district

Castles and palaces in the Waldshut district

Former monasteries in the district of Waldshut

Mills and saws in the Waldshut district