from Wikipedia, the free encyclopedia
This is the spotted version , flagged on July 27, 2020 . There are 2 pending changes that have yet to be viewed.

Hirschberg an der Bergstrasse is a community with around 9,900 inhabitants in the Rhein-Neckar district in the north-west of Baden-Württemberg . It is part of the Rhine-Neckar metropolitan region , a metropolitan area with 2.4 million inhabitants.

Today's community was created in 1975 through the unification of the two previously independent communities Großsachsen and Leutershausen on Bergstrasse . Both belonged to the Electoral Palatinate for centuries .

Hirschberg is located in the north of the Rhein-Neckar district not far from the border with Hesse . Direct neighbors are Hohensachsen in the north and Heiligkreuz in the east, both of which belong to the large district town of Weinheim , the city of Schriesheim in the south and the community of Heddesheim in the west. The nearest larger cities are Heidelberg twelve kilometers south and Mannheim 16 kilometers west.

The community consists of the formerly independent communities Großsachsen and Leutershausen on Bergstrasse . With the district reform of 1973 , it was incorporated into the newly formed Rhein-Neckar district . On January 1, 1975, Großsachsen and Leutershausen merged as part of the Baden-Württemberg regional reform to form the new municipality of Hirschberg on Bergstrasse .

The municipality is located on the western foothills of the crystalline Odenwald on the Baden Bergstrasse on the edge of the Upper Rhine Plain between 100 and 455 meters in height.

The northern Neckar alluvial cone runs in the Rhine plain . In the northern part there are clay soils with arable numbers up to 58. To the south, clay soils predominate and arable numbers up to 93 are reached. In the area of ​​the Bergstrasse there are even better soils, mainly loess , with values ​​up to 99. In particular, fruit, vegetables and wine are grown, and in the past also tobacco.

The district east of the B 3 is part of the Neckartal-Odenwald nature park . Almost all undeveloped areas in the nature park belong to the Bergstrasse-Nord conservation area, which was placed under protection in 1997 as a significant recreational area characterized by the transition from the Rhine plain to the Odenwald.

The climate of the Baden Bergstrasse is very mild all year round; the early flowering favors a high-yielding harvest in Hirschberg. The closest climate station in Heidelberg measured an average temperature of 11.1 ° C between 1971 and 2000 and rainfall of 745 mm per year. The warmest month is July with an average of 20.1 ° C, the coldest is January with 2.5 ° C. Temperatures above 30 ° C are not uncommon in midsummer. Most of the rainfall occurs in July and the driest month is February.

After the decline in population due to the wars in the 17th century, there was steady growth until the middle of the 19th century. During the industrialization there was then a decline due to the emigration to Mannheim, before the number of inhabitants increased again. After the Second World War, both communities took in many evacuees and displaced persons , causing the population to increase by more than 60 percent by 1950. A slight decline followed until 1956, before increasing motorization made it possible for many workers to move from the surrounding towns to Hirschberg, who then commuted to their workplaces.

Town hall from 1993. The porcelain carillon with bells made from Meissen porcelain sounds three times a day.

The old town hall in Leutershausen

The mayor is directly elected for eight years. Werner Oeldorf was mayor from 1975 to 2007 since the community was founded. Manuel Just was elected as his successor in April 2007 . Just was only 27 years old at the time, making him the youngest mayor in the Rhein-Neckar district. In April 2015 Just was re-elected with 97.9% of the votes cast. In June 2018, Just was elected Lord Mayor of the neighboring town of Weinheim , but was only able to take up office there in May 2019 due to an election challenge and until then remained Mayor of Hirschberg. In August 2019, Ralf Gänshirt was elected as the new mayor of Hirschberg.

The description of the coat of arms reads: In the shield split by silver and red, a blue wavy bar in front, growing from it a red apple on a green stem, underneath a black mark (like the zodiac sign Aries), behind an upright, left, five-pointed silver deer pole . The coat of arms was awarded in 1977 and refers to the old coats of arms of the formerly independent communities. In the front, the apple creek can be seen above the sign of Greater Saxony. The five-ended stag pole refers to the extinct family of the Hirschberger , whose castle ruins are above Leutershausen. The flag is red and white.

In 1986 the partnership agreement was signed with Brignais , near Lyon in France. Shortly thereafter, Schweighausen in Alsace was added. Since 1991 there has been a partnership with Niederau in the district of Meißen .

Hirschberg an der Bergstrasse belongs to the Heidelberg-Mannheim neighborhood association , whose task it is to draw up the regional land use plan.

Wiser Castle in Leutershausen from 1716.

See the main article on the sub- locations Großsachsen and Leutershausen .

A porcelain carillon made of Meissen porcelain was inaugurated above the entrance to the Hirschberg town hall on October 19, 1996 . Today the carillon consists of 18 porcelain bells.

The biggest festivals in the district of Leutershausen are the street festival every year in July and the Storchenkerwe in September.

The Olympic cinema in Leutershausen, built in 1952, was threatened with closure in 1997 for economic reasons, which was prevented by the establishment of a support group. Converted into a support association in 2000, this support group has been operating the municipal Olympia cinema itself since 2007 and offers a demanding daily program that is supplemented several times a year with live performances by artists.

Hirschberg is known nationwide for the sporting success of its handball teams.

In the 2019/20 season, SG Leutershausen and TVG Großsachsen played in the middle of the third division .

Hirschberg is a commuter community . More than 90 percent of the population find work in the surrounding cities, particularly Weinheim and Mannheim, and commute to work every day. Along the railway line and the motorway, Hirschberg has industrial areas in which around 1,000 jobs are available. 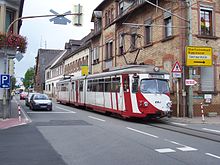 The federal highway 3 leads through both districts to Weinheim and Heidelberg. The parallel federal motorway 5 , built in the 1960s, is easily accessible with its own Hirschberg junction.

The Main-Neckar-Eisenbahn is a bit out of the way and has the Heddesheim / Hirschberg station, named after both communities, between Hirschberg-Großsachsen and Heddesheim .

Line 5 of the Rhein-Neckar transport association (VRN) (formerly: Oberrheinische Eisenbahn (OEG)) runs parallel to the B 3 in a circular route along the Bergstrasse to Weinheim, Heidelberg and Mannheim; the line runs every 10 minutes during rush hour. Bus routes lead to Weinheim and Heddesheim as well as to the Odenwald.

The Rhein-Neckar-Zeitung , the Weinheimer Nachrichten and the Mannheimer Morgen report on the Hirschberg community life .

There is a primary school in each of the two districts , as well as two Protestant and one Roman Catholic kindergartens and a privately run forest kindergarten. The community operates a library with branches in both districts and there is a Catholic public library in Leutershausen. The Volkshochschule Badische Bergstrasse has a branch in Leutershausen.