Neulußheim and the surrounding area 1907

Neulußheim belongs to the Rhine-Neckar metropolitan region and lies in the Upper Rhine Plain . The Kriegbach , which flows into the Rhine just under a kilometer west of the municipality, flows on the southern border of the district .

The comparatively small district extends over 339 hectares. Of this, 50.6 percent is settlement and traffic area and 47.9 percent is used for agriculture.

In addition to the main town, Neulußheim also includes the Seventeenth Winning Houses.

Plan of Neulußheim from the time it was founded

The place was founded in 1711 at the suggestion of the Württemberg clerk and official Julius Schickard on the eastern boundary of the village of Lußheim (since 1816: Altlußheim) at a crossroads as Lußhofen . The area assigned to the keeper Schickhard on March 19, 1711 by Duke Eberhard Ludwig of Württemberg was 100 acres. The first building was a Meierhof with an inn and a brewery.

The place belonged to the bishopric of Speyer under the protection of Württemberg (Stabspflege Speyer, Oberamt Maulbronn ). In the course of secularization , the monastic superior office was converted into a secular Württemberg office in 1803. Alt- and Neulußheim went to the Grand Duchy of Baden with the exchange and depuration contract of 1806 . In 1816 the original name Lußhofen was officially changed to Neulußheim , after the new name was occasionally used from 1735 onwards. In 1821 Neulußheim became an independent municipality, but fought for a long time with Altlußheim about the exact layout of the district before a settlement was reached in 1830.

Within the Baden administration , Neulußheim was part of the Schwetzingen office for a long time . This was dissolved in 1924 and became part of the Mannheim District Office, later the Mannheim district .

Politically, after the founding of the empire in 1871, the National Liberals were the strongest, before they were overtaken by the Social Democrats in 1900 . During the Weimar Republic , the unfavorable social structure caused radicalization early on. In 1924 the KPD gained 28 percent and from 1928 the NSDAP had a majority and received 66 percent of the votes in the Reichstag election in March 1933 .

In 1952 Neulußheim became part of the newly created state of Baden-Württemberg . During the community and district reform in the 1970s, the community was connected to the Rhein-Neckar district and entered into an administrative partnership with the city of Hockenheim, Altlußheim and Reilingen .

The relocation of the old road axes that crossed in the center out of the town, today's federal highways 36 and 39, made for a great deal of traffic relief. In 2011 the community celebrated the three hundredth anniversary of Neulußheim.

Due to the convenient location at the intersection of the streets Hockenheim-Graben and Speyer-Wiesloch, the young community developed rapidly and by the end of the 18th century Altlußheim had almost reached the population. The construction of the Mannheim – Karlsruhe railway line in 1870 caused another leap. After the Second World War, Neulußheim took in more than 400 displaced persons . 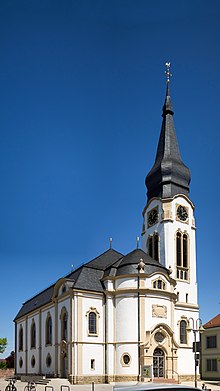 For a long time Neulußheim was shaped religiously very uniformly. In 1804 more than 98 percent of the population were Lutherans and in 1925 92 percent were Protestant. With the admission of displaced persons after the Second World War, the proportion of Catholics rose to 25 percent in 1967.

The Protestant community is now part of the southern Electoral Palatinate district of the Evangelical Regional Church in Baden and the Catholic community is part of the Wiesloch deanship of the Archdiocese of Freiburg .

The mayor is directly elected for a term of eight years.

Mayor since the end of the Second World War:

The blazon of the coat of arms reads: In blue, a continuous, polished silver cross, angled by four golden stars.

In the 19th century, the community only included the Latin capital letters "NL" with a star as an ornament in the seal. In 1911 the coat of arms was recreated by the Baden General State Archives. Historically incorrectly, the Speyer cross was chosen as the main motif. The old seal was quoted with the stars.

The flag is white and blue.

The tower clock museum , which shows clocks from three centuries, is located in the attic of the old school . In the old train station is a local history exhibition. In addition, thematic exhibitions on local history are regularly presented. 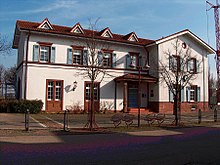 Cultural events, concerts and exhibitions take place regularly in the building of the old train station. It is also possible to hold civil weddings here.

Neulußheim has a stop on the Karlsruhe – Mannheim line that is served at least hourly by regional trains on the Karlsruhe – Mannheim line. There are also buses from Heidelberg – Speyer and Altlußheim – Walldorf to the town. There is also a bus connection between the Neulußheim train station and the Rot / Malsch train station. Neulußheim belongs to the tariff area of ​​the Rhein-Neckar transport association .

There are direct connections to the federal trunk road network via the B 39 ( Frankenstein (Pfalz) - Mainhardt ). The A 61 runs to the north and the A 6 to the east .