This article deals with the city in the Rhein-Neckar district. For further meanings see Rauenberg (disambiguation) . 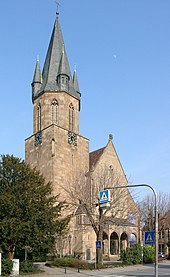 Town hall in the historic center of Rotenberg

Rauenberg is a city in the Rhein-Neckar district within the administrative district of Karlsruhe in Baden-Württemberg . It belongs to the European metropolitan region of Rhine-Neckar (until May 20, 2003 the Lower Neckar region and until December 31, 2005 the Rhine-Neckar-Odenwald region ). Rauenberg, together with its districts Rotenberg and Malschenberg, has over 8,000 inhabitants.

The city is located around 16 kilometers south of Heidelberg at the exit of the Angelbach valley through which the Waldangelbach flows into the Upper Rhine Graben . The valley previously runs through the hilly landscape of the Kraichgau , in which another Angelbachtal runs not far, that of the Gau angelbach .

Neighboring communities, starting in the north in a clockwise direction, are Wiesloch , Dielheim , Mühlhausen , Malsch and St. Leon-Rot .

The city of Rauenberg consists of the three districts Rauenberg, Rotenberg and Malschenberg . They are spatially identical to the earlier cities and municipalities of the same name, their official name is in the form "Rauenberg district ...". The northwest of the Rauenberg district used to be a separate tenth district , which is why it is assumed that another settlement was located here.

Rauenberg was first mentioned in a document in 1303. However, excavations showed that people had already settled in what is now the Rauenberg district. In the Middle Ages there were two settlements on the site of today's Rauenberg: Wederswilre and Ruhenberg . The name Ruhenberg comes from the Middle High German Ruh (scrubby bushes, dense forest) and changed via Ruchemberg to today's Rauenberg . Wederswilre was originally called Wilre and, according to archaeological finds, was settled as early as the 10th century. It is assumed that the Lords of Wider received the place as a fief by 1300 at the latest and the name developed into Gegenwilre and later Werdersweiler . Around 1317 Gerhard von Oßweiler appears as local lord and remained so for about three decades. In the same year, a certificate with an In gotes name begins . We Gerhart a ridter called von Oiswil who wants to eat there too much .... ; in it Wedersweiler is mentioned for the first time.

Around 1400 Ruhenberg was given up for unknown reasons, Wedersweiler took over its name and the districts of both places were merged. This history of origins required a long condominium from several local lords. It was not until 1677 that the Speyer Monastery acquired the entire site. With the secularization of 1803 Rauenberg came to the Grand Duchy of Baden .

The end of the First World War and the collapse of the German Empire in 1918 did not change everyday life in Rauenberg, as in many other politically unrelated areas. Until 1923, for example, coal and food were rationed according to the wartime economy regulations. In the first election for the regional assembly in 1919, 80 percent of the votes went to the Center Party . This was to remain the leading party in Rauenberg until the late phase of the Weimar Republic. In the last four state elections in the years 1929–1930, the proportion of NSDAP voters gradually rose to 20 percent; The Center Party's share of the vote remained relatively high at 70 percent at the end of the Weimar Republic.

With the seizure of power of Hitler's leadership of the center in Rauenberg was over. On July 6, 1933, all center members of the parish council resigned from their offices "voluntarily".

In the course of the “ Law for the Prevention of Hereditary Offspring ”, eleven people from Rauenberg were registered for forced sterilization. In the spring of 1942 riots broke out over this in Rauenberg. The Catholic pastor August Meier quoted from the so-called Möldersbrief in his sermon and was arrested by the Gestapo . About a hundred Rauenbergers then entered the town hall and demanded the priest's release. After a massive police operation, ten people were arrested and sentenced to between four and eight months in prison for violating the peace . The pastor was released after his pre-trial detention and was transferred to another parish.

After the end of the Second World War , Rauenberg was under American occupation. This set up a provisional mayor in April 1945, who appointed the first Rauenberg municipal council in the post-war period by June. At the beginning of 1946 the first local council was freely elected, with the CDU accounting for 90 percent of the votes . Due to the district reform in 1973 , Rauenberg came from the disbanded district of Heidelberg to the Rhein-Neckar district .

On January 1, 1975 Rauenberg was granted city rights. The reason was not the number of inhabitants, but rather the history of what is now the Rotenberg district . Ludwig IV the Bavarian had given this town charter as early as 1338 . 1975 revived the rights and passed from Rotenberg to the new unified community.

Not completely free of disruption, but voluntarily the municipality reform took place in 1972 . The city of Rotenberg joined on January 1, after its citizens had decided against incorporation into Mühlhausen. Malschenberg was added on April 1, 1972, after the citizens had decided against incorporation into Malsch or Wiesloch. After the incorporation, Rauenberg had almost 6000 inhabitants. A new town hall was built for the joint local administration in Rauenberg, where the school used to be opposite the church. 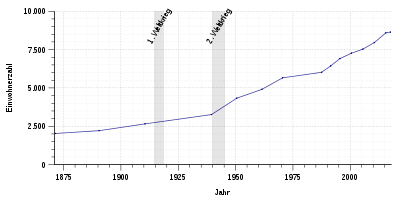 Population development of Rauenberg from 1871 to 2017

Because it was part of the Speyer monastery (until 1803), Rauenberg remained unaffected by the Reformation . Even today, the city is predominantly Roman Catholic ; in each of the three districts there is a Catholic church with its own parish, which are combined with three other parishes in the Letzenberg pastoral care unit, which is based in Rauenberg. The St. Peter and Paul Church , which was completed in 1910 and is the largest church in the area, is also known as the “Angelbach Valley Cathedral” in Rauenberg . The parish church of St. Nikolaus, completed in 1806, is located in the Rotenberg district and St. Wolfgang's church, which was only built between 1979 and 1982, is in Malschenberg.

The evangelical Paulus congregation was reorganized through a structural reform on June 1, 2011 and includes - sorted by size - the congregations of Rauenberg, Malsch, Rettigheim, Malschenberg and Rotenberg. The pastor holds church services for all three parts of the city every 14 days in the Protestant parish hall in Rauenberg, which was completed in 1993. For the first time in its 700-year history, a Protestant clergyman lives in Rauenberg.

In contrast to the communities in the surrounding area, there is a very good and close ecumenical relationship between the Catholic pastoral care unit and the Protestant community.

The town council of Rauenberg normally has 18 members and is directly elected for a five-year term. In addition, the mayor acts as the municipal council chairman with voting rights. The Unechte Teilorteschahl guarantees the districts a fixed minimum number of seats in the council: Rauenberg has 11, Malschenberg 5 and Rotenberg 2 councilors.

Thanks to a compensatory seat, the municipal council has 19 members since the local elections in 2019 . Overall, the 2019 election led to the following result (in brackets: difference to 2014):

In Malschenberg and Rotenberg, localities are set up within the meaning of the Baden-Württemberg municipal code, each with its own local council and local chief as its chairman.

The blazon of the coat of arms reads: Divided in the Göpel cut; At the top right a continuous, cut silver cross in blue, at the left a blue tin tower in gold on a green three-mountain top, at the bottom in silver on green vine with two green leaves a blue grape. The flag is blue and white.

The flag and coat of arms were awarded in 1984 by the Rhein-Neckar-Kreis district office. It combines the most important elements of the three old coats of arms with the Speyer cross for Rauenberg, the grape for Malschenberg and the castle tower for Rotenberg. 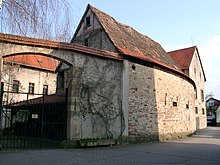 In 1986 the Rauenberg Wine Museum opened its doors in what was once the prince-bishop's palace . It shows numerous exhibits on the topics of viticulture and rural village life, including the original of the Rauenberg wayside shrine , at the old location of which in the corridor of the wayside shrine is today a true-to-original copy.

The castle over Rotenberg

The historic town center in the Rotenberg district consists of three half-timbered houses, the town hall and the two houses of the Menges farming family. The oldest of the three can be dated to 1713 through its corner stone. Together with the Schlossberg spring in front of the town hall, the over 200 year old St. Nicholas Church in the northwest and the castle on the hillside of the Schlossberg in the northeast, the result is a striking silhouette.

In the clay pit "Unterfeld" between Rauenberg and Wiesloch, two hummingbird fossils were found which, with an age of over 30 million years, are the oldest of their kind worldwide. Today you are in the Natural History Museum in Karlsruhe .

The Winzerkerwe , which takes place every year on the second weekend in October , the Malschenberg Portuguese Festival in September as well as the Martini-Kerwe in November and the Christmas market before the first Advent in the historic center of Rotenberg are of regional importance .

The Angelbach zoo in Rauenberg is over 3 hectares in size. The zoo is looked after and cared for by the volunteer helpers from the Vogelfreunde Rauenberg eV association. The association mainly looks after the animals and maintains the park. Entry to the park is free, but a donation is requested. There are play equipment in the park, including the “Noah's Ark”, a large sandpit, swings and slide.

Rauenberg is one of the largest wine-growing communities in North Baden. The locations belong to the Baden wine-growing region .

The city has good transport links. Immediately north of Rauenberg itself is the Wiesloch-Rauenberg autobahn exit of federal autobahn 6 ( Saarbrücken - Nuremberg ), which runs west-east here. The urban area on the western edge of Rauenberg and Rotenberg and the Angelbachtal crosses perpendicular to this from the junction with Bundesstraße 39 . Malschenberg lies between this federal road and federal road 3, which runs parallel to it at a distance of about three kilometers, on a low ridge.

Rauenberg can be reached by bus with the transport association Rhein-Neckar -Linie: Wiesloch-Walldorf train station - Wiesloch - Rauenberg - Rotenberg - Mühlhausen - Eichtersheim / Waldangelloch. This line replaced the passenger traffic that had been discontinued in 1980 on the former Wiesloch – Meckesheim / Waldangelloch railway line . Since December 2008, there has also been an express bus to Wiesloch-Walldorf train station on weekdays during rush hour. Also in December 2008 the line from Wiesloch-Walldorf station - Frauenweiler - Malschenberg - Rauenberg was set up again. The Malschenberg district also has a connection to the Östringen - Malsch - Malschenberg - Wiesloch - Rot - St. Leon bus route.

With the Mannaberg School in Rauenberg, the Schlossberg School in Rotenberg and the Brunnenberg School in Malschenberg, each district has a primary school. The secondary schools are in the neighboring communities: the Werkrealschule in Mühlhausen and Dielheim, the Realschule, the Gymnasium, the vocational school and the special school center in Wiesloch.

A Roman Catholic kindergarten is available for the youngest residents in every part of the city ; together with the two municipal facilities in Rauenberg, there is a wide range of pre-school facilities, starting with crèche places.