After he was elected president in the first multi-party elections in Croatia , the country declared state independence from Yugoslavia under his government in 1991 after a referendum in May 1991 , which initially led to the Croatian War. In 1995 Tuđman signed the Dayton Agreement with Slobodan Milošević and Alija Izetbegović , which enclosed the Bosnian War . Tuđman’s politics and governance during his presidency have been characterized as autocratic and nationalistic . 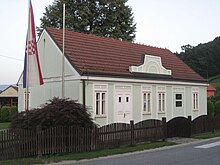 Tuđman's father Stjepan was a leading member of the Croatian Peasant Party . Franjo had two brothers, Stjepan and Ivica. His brother Stjepan died in the spring of 1943 as a member of the anti-fascist movement. His father was one of the co-founders of ZAVNOH ( Zemaljsko antifašističko vijeće narodnog oslobođenja Hrvatske ).

Tuđman attended elementary school in his hometown between 1929 and 1933 and went to high school in Zagreb from 1934 to 1941 . During high school he became a member of the national democratic movement. 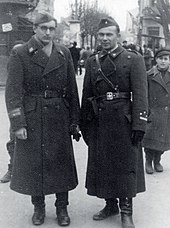 From 1941 he actively participated as a partisan in the anti-fascist movement. During the Yugoslav Civil War he was appointed one of the representatives on the command staff of the National Liberation Army (NVO) and the Movement for the Liberation of Yugoslavia (POJ).

In 1946 his father and stepmother were found shot dead. His parents died in a violent crime, the circumstances of which have not yet been clarified.

As a member of the communist nomenklatura

He then worked in the Ministry of Defense personnel office. In Belgrade he graduated from the military academy between 1955 and 1957 . In 1960 he was promoted to the rank of general , but in 1961 he left the Yugoslav People's Army again to concentrate on his academic work. In the same year he founded the "Institute for the History of the Labor Movement of Croatia" in Zagreb and remained its director until 1967. In 1963 he was awarded the title of Professor of Political Science at the University of Zagreb . In 1965 he was awarded a doctorate in political science by the University of Zagreb after defending his controversial treatise on "the causes of the crisis in monarchist Yugoslavia from its inception in 1918 to its disintegration in 1941". 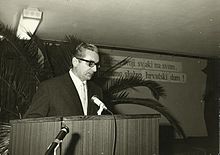 In 1967 Tuđman campaigned for more autonomy for Croatia and the independence of the Croatian language as part of the “Croatian Spring” . The movement was opposed by the Yugoslav leadership as nationalist; Tuđman subsequently lost his post as director of the Institute for the History of the Labor Movement in Croatia and was expelled from the Union of Communists of Yugoslavia .

After the suppression of this national movement, he was arrested, along with many other prominent representatives, for “counter-revolutionary activities” in 1971 and became one of the main accused. Only because of an intervention by the writer Miroslav Krleža with Josip Broz Tito , the long prison sentence against him was reduced to two years and later to nine months. In February 1981, Tuđman was again sentenced to three years in prison and banned from interviewing Western radio and television companies for another five years. Between 1982 and 1983 he was again imprisoned in Lepoglava for "subversive propaganda" . Then his detention was suspended until May 1984 due to health problems. As a result, he was finally released in September 1984.

After receiving a passport from the authorities again in 1987, he first traveled to Canada and the USA and then through Europe, where he gave lectures on the Croatian national movement. In 1989 he founded the “ Croatian Democratic Union ” (HDZ) and became its chairman.

As a member of the Croatian Academy of Sciences , Tuđman has also received several international awards: " Catarina de Medici " in November 1990, honorary doctorate from the University of La Jolla in December 1990.

First President of the Republic of Croatia 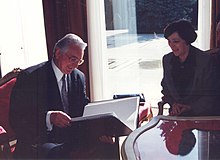 In April 1990 Croatia held the first democratic parliamentary elections since World War II. On May 30, 1990, Franjo Tuđman was elected President of the then Socialist Republic of Croatia by the newly elected parliament “ Sabor ” .

On May 19, 1991 a referendum on the political future of Croatia was held. The turnout was 83.56%. 94.17% were in favor of Croatian sovereignty. On the basis of these results, the Croatian Parliament adopted the constitutional resolution on the sovereignty and independence of Croatia on June 25, 1991.

After the constitution of Croatia was changed, he was elected President of the sovereign Republic of Croatia on September 2, 1992 .

Franjo Tuđman advocated an independent Croatia and a free market economy as well as a multi-party democracy .

In his efforts to gain international recognition, Franjo Tuđman took part in the Yugoslavia Peace Conference, which began in The Hague in September 1991 under the leadership of Peter Carington . The Arbitration Commission of the Yugoslavia Peace Conference, which was headed by Robert Badinter , came to the conclusion on December 7, 1991 that it was "not a split off, but a disintegration" of the former Yugoslavia.

On June 15, 1997, Franjo Tuđman again won the presidential election and remained in office until his death.

On the night of December 10-11, 1999, Tuđman died of gastric cancer in the Dubrava Clinic Center in Zagreb .

After the end of the Tuđman era, a fundamental democratization and liberalization of the country began. At the same time, the market was opened to foreign investors and the Croatian economy , which previously consisted of state-owned companies, was gradually privatized. 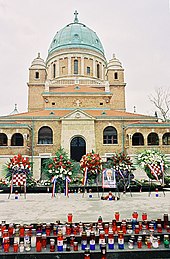 Tuđman's grave in the Mirogoj cemetery in Zagreb (2005)

One of the many monuments of Tuđman in Croatia ( bust in Selca , island of Brač )

Tuđman was sharply criticized for some statements in the book Bespuća povjesne zbiljnosti (The wrong ways of historical reality ), published in 1989 . Among other things, it was about the statement that a maximum of 30,000 to 40,000 inmates perished in the Croatian Jasenovac concentration camp , the majority of whom are said to have been Roma and not Jews. Tuđman further asserted that "the Jasenovac camp administration was in the hands of Jews who were actually responsible for the selection and liquidation themselves", and that they were "also those actually responsible for the persecution of the Serbs." According to other sources, Tuđman also reported that only about 20,000 Serbs were killed. The exact number of victims is the subject of historiographic controversy to this day, but the statements of Tuđman are viewed by critics as trivializing, as various renowned sources estimate the number of victims at 77,000 to 99,000 people. In addition, the criticism refers to parts of the text that are understood to be openly or covertly anti-Semitic . In total, more than 300,000 Serbs were killed in Croatia and Bosnia under the Ustaše .

Tuđman made anti-Semitic statements at several election campaign events in the 1990s. So he was happy that he was "not married to a Jewess". He also vouches for the statement: “Jews arouse envy and hatred, are always the victims of their own claims as well as those of others. But anyone who tries to draw attention to the fact that they themselves are the source of their Jewish tragedy provokes the hatred of Judaism. "

In addition, Tuđman promoted the reappearance of symbols of the fascist Ustasha era, for example by reintroducing the chessboard coat of arms in the variant also used by the Ustasha.

Tuđman was also criticized for his partition policy towards Bosnia and Herzegovina practiced in the early 1990s . Although officially denied, there were indications that Tuđman's policy was temporarily aimed at integrating part of Bosnia and Herzegovina into the Croatian state association, in agreement with Serbian President Slobodan Milošević . When Croatian nationalists transferred state functions to the previously proclaimed autonomous territory of the Croatian Republic of Herceg-Bosna on July 3, 1992 and heavy fighting between Croats and Muslims in Bosnia broke out in the spring of 1993 , Tuđman expressed his “full understanding” for the wishes of some Bosnians Croatians, "to join the areas they inhabit to the Republic of Croatia", denied any support from Croatia. However, the Croatian Army not only supported the Croatian Defense Council , which is active in Bosnia, in the training of units, armament and logistics, but also sent between 15,000 and 20,000 men to be directly involved in the fighting. In May 1993, then German Foreign Minister Klaus Kinkel publicly criticized the Croatian part in the Bosnian war and called on Tuđman to put an end to the Croatian war crimes in Bosnia. The group around Stipe Mesić and Josip Manolić , at that time the presidents of the two parliamentary chambers, demanded an immediate end to the aggressive Bosnian policy.

The International Criminal Tribunal for the Former Yugoslavia (ICTY) had investigated Tu gegenman, but Tuđman's death prevented the tribunal from prosecuting him. So said Carla Del Ponte , chief prosecutor of the ICTY that "Tuđman would have been charged if his death would be the not come earlier." In mid-April 2011, when the verdict against Ante Gotovina this, in which because of war crimes and crimes against humanity guilty for was found, also mentioned Tuđman. One of the judges emphasized that the then President Franjo Tuđman was the main leader of a criminal organization whose aim was the forcible and permanent eviction of the Serbian population from the Krajina region. Other high-ranking Croatian politicians involved are Gojko Šušak , Janko Bobetko and Zvonimir Červenko . The then Prime Minister Jadranka Kosor announced in April 2011 that the Croatian government would appeal against the convictions and support the court's assessment that Tuđman acted as the mastermind behind the evictions.
In the appeal proceedings, it was determined with a 3-2 majority decision that the evidence was insufficient to consider the shelling of the cities ordered by Gotovina and Markač to be unlawful. Since the first instance conviction for the formation of a criminal association for the expulsion of Serbs from the Krajina is based on the illegality of the artillery attacks and the first instance did not establish a direct involvement in Croatia's policy of discrimination, this guilty verdict should be set aside. 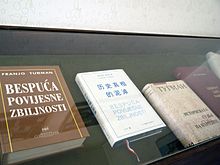 President of the Republic of Croatia