In the Rheingau-Taunus district near Rüdesheim there is one of Germany's most important memorial buildings, the Niederwald Monument (photo from 2014 after the renovation).

The Rheingau-Taunus-Kreis is a regional authority in the Darmstadt administrative district in Hesse . The district town is Bad Schwalbach , the two administrative branches are in Rüdesheim am Rhein and Idstein .

The district was created in 1977 from a merger of the Rheingaukreis and Untertaunuskreis . A special feature is that the district town of Bad Schwalbach is only the seventh largest municipality in the district in terms of residents. The most populous city in the Rheingau-Taunus district is Taunusstein .

The district surrounds the western half of the Taunushauptkamm , with the former district of Untertaunus extending north of Wiesbaden in the western Hintertaunus . On the eastern edge of the district, already near the Großer Feldberg , lies the 629.3  m above sea level. NHN high Windhain as the highest point. Southwest of the Untertaunus and beyond the deeply cut Walluftal , the Rheingau is grouped to the north and south around the Rheingau mountains with settlement focus and vineyards near the banks of the Rhine and in the Taunus foreland. To the north of it, in the Rheingau Mountains and the Wispertaunus, there are extensive forest areas, which are among the largest in Hesse. The Rhine forms the southern and southwestern district and state borders. The westernmost part of the district is part of the Upper Middle Rhine Valley Cultural Landscape World Heritage .

The district area covers a total of 81,148 hectares.

As a type of use, the forest area reaches 55.7 percent, a proportion that is well above average in Hessen. The size of the water surface is remarkable and, at almost 15 square kilometers, exceeds the area of ​​the Edersee by almost 30 percent. This wealth of water is due to the portion of the Rheingau-Taunus-Kreis on the Inselrhein , which reaches a width of 1000 meters in places at the height of the Rheingau. The district boundary lies in the middle of the historical main fairway.

Neighboring areas are the districts of Limburg-Weilburg , Hochtaunuskreis and Main-Taunus-Kreis and the independent city of Wiesbaden (all in Hesse), starting clockwise in the north . In the south and southwest, the Rhine forms the natural border with the state of Rhineland-Palatinate . There is the Mainz-Bingen district to the left of the Rhine . In the northwest it borders on the Rhein-Lahn district in Rhineland-Palatinate .

The formerly Franconian Rheingau belonged to the ore monastery of Mainz from 983 to 1803 and then came to the Duchy of Nassau . The Untertaunus belonged west of the Aar to the Niedergrafschaft Katzenelnbogen and the rest of the principality of Nassau. After the former Pays Réservé area was swapped with Kurhessen in 1816, the entire current district was part of the Duchy of Nassau. As a result of the German War of 1866, Nassau was annexed by the Kingdom of Prussia . The province of Hessen-Nassau was created . In 1867 the province was divided into districts and the Rheingaukreis with a district seat in Rüdesheim am Rhein and the Untertaunuskreis with a district seat in Langenschwalbach, today Bad Schwalbach, were created. They continued to exist when the area became part of the State of Hesse after World War II .

According to the 2011 census , 32.1% of the population were Protestant , 32.5% Roman Catholic and 35.3% were non-denominational , belonged to another religious community or did not provide any information. The number of Protestants and Catholics has fallen since then.

Frank Kilian (independent) has been directly elected District Administrator of the Rheingau-Taunus District since July 5, 2017 .

The Rheingau-Taunus-Kreis has a coat of arms, a hoisted flag and a banner flag .

The district council of the Rheingau-Taunus-Kreis decided to adopt the flag described below, which the Hessian Minister of the Interior approved on August 25, 1981.

"The flag of the Rheingau-Taunus-Kreis shows the colors blue and yellow, with the coat of arms of the district in the upper half."

See also : List of coats of arms in the Rheingau-Taunus district

Typical Taunus landscape near Hettenhain with a view over the Aartal

The international fame of the region is based on the quality viticulture in the Rheingau in connection with the Rhine romance . Top Rheingau wines, especially the Riesling white wine, enjoy a worldwide reputation. Next to it is Assmannshausen for its Pinot Noir known -Rotwein. The combination of wine culture and Rhine romance is an essential motor for tourism, which attracts both day-trippers from the Rhine-Main area and holidaymakers. This makes it an important industry in the region, with a focus on Rüdesheim, Assmannshausen and the Niederwald monument . For the majority of the district, which does not belong to the Rheingau wine-growing region, the Rhine-Taunus Nature Park was created with the aim of enabling people to relax in a natural way.

The Untertaunus , on the other hand, is characterized by general agriculture and small and medium-sized businesses . Many residents from both districts commute to Wiesbaden and Frankfurt am Main . 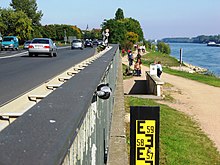 At 629.3 meters, the Windhain is the highest point in the Rheingau-Taunus district. The mountain is located on the eastern edge of the district above the place Wüstems and is part of the Feldberg-Langhals-Pferdskopf-Scholle .

The only federal motorway that runs through the district is the A 3 in the east . It crosses it in the Cologne – Frankfurt am Main section from north to south with the Idstein and Wiesbaden / Niedernhausen junctions.

The A 66 goes to the junction Wiesbaden woman stone in the national road 42 on which to Lauterbach (Rheingau) is expanded to four lanes. From then on, except in the Rüdesheim through-town, it runs as a bypass road along the Rhine in the direction of Koblenz . It is located on a raised road in the floodplain , but is still threatened by flooding during flooding. The first flooded point is a short stretch with a lowered carriageway between Oestrich and Mittelheim . Other federal highways in the district are the B 8 , B 54 , B 260 , B 275 and B 417 .

Since 2002, the Cologne – Frankfurt high-speed line has been running along the A3 without stopping through the district. The closest ICE stops are Wiesbaden Hbf , Mainz Hbf , Frankfurt (Main) Hbf , Limburg Süd and Koblenz Hbf . The district area is opened up by two railway lines, on the one hand by the right Rhine route , which connects the Rheingau with Wiesbaden and Koblenz, and on the other hand the Main-Lahn-Bahn between Frankfurt or Wiesbaden and Limburg with four stops in the district. The Aartalbahn , which connected the district town of Bad Schwalbach with Wiesbaden, has been shut down since 1983 with the exception of a temporary museum railway operation by the Nassau Tourist Railway .

In the south and west, the Rheingau-Taunus district has a share of the Rhine as an international waterway. The circle boundary is in principle in the middle of the fairway and thus includes some islands. The largest of these islands is the Mariannenaue near Erbach and Hattenheim . The only Rhine bridge in the district, the Hindenburg Bridge , was destroyed in World War II and not rebuilt. There are car ferries across the Rhine from Oestrich-Winkel to Ingelheim , from Rüdesheim to Bingen and from Lorch to Niederheimbach . At Rüdesheim there is a protective harbor with a water police station . Landing points for liner shipping of the Cologne-Düsseldorfer are in Eltville, Rüdesheim, Assmannshausen and Lorch. In addition, several companies based here offer scheduled excursions. In Rüdesheim there are also several berths for cabin ships that moor here on river cruises .

There are several hospital locations in the Rheingau-Taunus district. The former district hospitals Idstein and Bad Schwalbach were privatized in 2001 and the location in Bad Schwalbach - despite protests - was closed by Helios in May 2018. Since then, Helios has been operating the Idstein Hospital, which was built at the new location in 2008. The St. Josefs Hospital Rheingau is located in Rüdesheim am Rhein . The Eichberg Clinic for Psychiatry and Psychotherapy and the Rheinhöhe Clinic for Child and Adolescent Psychiatry are located near Eltville , and the St. Valentinus Hospital is located in Kiedrich. The Kalmenhof disabled and youth welfare facility is located in Idstein .

The rescue service in the district is carried out on behalf of the district by the Malteser Hilfsdienst , the German Red Cross and the Arbeiter-Samariter-Bund and coordinated by the central fire and rescue control center in Bad Schwalbach.

The rescue guards in

The locations of the emergency medical vehicles are

The Rheingau-Taunus-Kreis comprises 17 communities, 8 of which are cities. The district town is Bad Schwalbach, the most populous city is Taunusstein. Two cities, Eltville and Rüdesheim, have the official addition "on the Rhine". In addition, the cities of Geisenheim and Idstein were awarded the title “University Town” by the Hessian Minister of the Interior .

On January 15, 1980, the entire district was assigned the distinctive sign RÜD , which had been derived since 1956 for the Rheingau district from its district town Rüdesheim am Rhein . Previously, the abbreviation SWA (for Bad Schwalbach ) of the former Untertaunus district was still used in the Untertaunus. Since 15 August 2013, is in the course mark liberalization next RÜD also SWA available again.

Municipalities in the Rheingau-Taunus district