One of the slightly different ASB logos. The light cross with a red S.

Arbeiter-Samariter-Bund ( ASB ) is the name of several national, independent aid and welfare organizations that historically go back to initiatives by workers and craftsmen to help themselves in the field of emergency rescue and training in first aid . 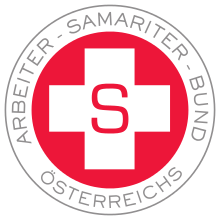 Logo of the Austrian Arbeiter-Samariter-Bund (ASBÖ)

The services of the Arbeiter- Samariter- Bund are provided by voluntary helpers and full-time employees. Furthermore, in Germany you can do the Voluntary Social Year (FSJ) and the Federal Voluntary Service (BFD) as well as in Austria the civil service with the Arbeiter-Samariter-Bund. In any case, appropriate training is required in order to be able to be used for the respective activities.

The Arbeiter-Samariter-Bund was founded in Germany in 1888. Throughout Germany there are 16 regional associations and 206 regional structures (regional, district and local associations ). Around 1.3 million people are currently members of the ASB. The federal office is based in Cologne . The ASB has around 33,000 full-time and 16,000 voluntary employees, the latter including around 2560 employees in the voluntary social year and federal voluntary service (as of December 31, 2012). Franz Müntefering has been the honorary president of ASB Germany since 2013.

The Austrian Arbeiter-Samariter-Bund ( ASBÖ ) was founded in 1927. It is active in all nine federal states, but to different degrees. The presence is strongest in Vienna , similarly strong in Lower Austria , Upper Austria and Salzburg . The individual local groups are constituted as independent associations and are relatively loosely organized in a federal structure with a federal association and nine regional associations.

The first organization outside Germany was the Samaritan Association of Workers in Denmark in 1907 , from which the Arbejdernes-Samariter-Forbund (ASF) Denmark was formed in 1923 . After the Second World War , the ASF was transformed into a welfare organization with the name ASF-Dansk-Folkehjaelp .

The former German ASB columns in Alsace, which now belonged to France, founded the Federation des Sociétés Samaritaines Ouvriers de France in 1921 . In 1964 the Samaritans joined the organization of the French Samaritans of the White Cross (Secouristes Français - Croix Blanche), which had existed since 1892 .

The Congress of the Lucerne Sports International decided in September 1927 to set up their own medical organizations in all countries based on the example of the German ASB. On November 10, 1929, the first ASB conference of Czechoslovakia took place in Prague. ASB-Sweden was founded in Stockholm in 1931 and ASB Norway in Oslo in 1932.

Since 1994 the European Samaritan organizations have been united in an umbrella organization under the name Samaritan International .