The Arbeiter-Samariter-Bund Deutschland e. V. (ASB) is a politically and denominationally independent aid and welfare organization based in Cologne. He is a founding member of the International Samaritan Association . The ASB is historically close to the labor movement and social democracy .

The industrial revolution of the 19th century led to a dramatic increase in accidents at work. In 1877 the St. John's Ambulance Association of the Order of St. John was founded in England . Medical schools and volunteers have been trained in many cities.

In the summer of 1881, the German surgeon Friedrich von Esmarch (1823–1908) got to know this organization in London and founded a Samaritan school on his return to Germany . Numerous textbooks of the German Samaritan Association were created. However, they were primarily aimed at senior health care officials and were unaffordable for the bulk of workers.

In 1888, six Berlin carpenters took the initiative and, against much opposition, implemented the first training course on first aid in the event of accidents on November 29, 1888 and founded the first column . These carpenters weren't just the founding fathers of the ASB; Through their initiative, they have also given emergency rescue services in Germany significant impetus. Soon these training courses became a regular facility of the association, which in 1895 changed its name to "Samaritan course for workers" and from 1896 appeared in public as a worker Samaritan .

When three men drowned on August 5, 1900 at the song festival of the German Workers 'Association on the White Lake in Berlin, the Berlin Samaritans founded the water rescue service of the Workers' Samaritan Column.

Foundation and time of the Weimar Republic

In 1909, at a founding meeting in Magdeburg, eleven workers 'Samaritan columns formed the Workers' Samaritan Association. The first seat of the federal government was Berlin . In 1923, the two Samaritans from Chemnitz, Theodor Kretzschmar and Eugen Richter, were elected federal chairman and federal treasurer of the ASB. This went hand in hand with the relocation of the ASB headquarters to Chemnitz . ASB's own medical bag , the Chemnitz bag, was also manufactured in the parliament building there . The federal government also owned in Herchen a. d. Win a convalescent home .

The Arbeiter-Samariter-Bund had close ties to the SPD and the free trade unions . In 1928, for example, 31 of the 36 district leaders were SPD members and 30 were unionized. At the ASB Bundestag in Cologne in 1929, 73 of the 89 delegates were SPD members, eight belonged to the KPD , and another eight were non-party. The party political ties mainly affected the level of functionaries. The ordinary members mostly did not belong to any party, but the majority sympathized with the SPD. In 1933 there were around 48,000 active members in 1510 columns in the ASB.

After the seizure of power by Adolf Hitler , the ASB was placed under Nazi line. However, since many members were not willing to gleichschalten to let many withdrew from the federal government, which led to the ban on 1 August 1933rd

After 1945, the Soviet military administration in Germany suppressed the re-establishment of the ASB in the Soviet occupation zone , which consequently did not exist in the later German Democratic Republic either. Immediately after the end of the war, former worker Samaritans tried to re-establish the ASB in various regions of West Germany without knowing each other. With the establishment of the Federal Republic of Germany , the ASB quickly developed supra-regional structures. In the western sectors of Berlin , the ASB could only be re-admitted after the city split in 1950.

In April 1952, ASB Deutschland e. V. instead. The headquarters of the Federal Association was initially Hanover , with the construction of the new Federal Parliament, the move to Cologne-Sülz took place . In 1970 the ASB replaced the previous salutation “Comrade” with “Samaritan”. After the reunification of Germany , the ASB was rebuilt in the new federal states in 1990.

The federal board consists of

Federal chairwoman of the ASB

President of the ASB

Franz Müntefering, President of the Arbeiter-Samariter-Bund Germany since 2013

Federal Managing Director of the ASB

With 172 old people's homes, 70,000 house emergency connections and other offers, the ASB is one of the largest German providers of care for the elderly. In 2019, ASB maintained 275 rescue stations in Germany and carried out 1,100 repatriations worldwide. There are also 772 rescue dog teams, 400 school medical services and 18 water rescue stations as well as foreign aid in 18 countries.

The Arbeiter-Samariter-Jugend (ASJ) is the youth association of the Arbeiter-Samariter-Bund. Its beginnings go back to the 1920s. It is an integrated and integral part of the adult association, but has a special position within the overall organization. This is laid down in the guidelines belonging to the statutes of the ASB. Members of the ASB up to and including the age of 26 are also members of the ASJ.

According to its adult association, the ASJ is divided into local, district or regional associations, state associations and the federal association. The respective ASJ organizational level bears the name of the corresponding ASB association or the country. At the federal level it is called ASJ Germany.

The young Samaritans are represented with around 100,000 members in all federal states. The ASJ attaches great importance to contemporary leisure activities that promote tolerance, self-confidence, understanding and humanity. She wants to make the values ​​tangible for young people through joint action.

Through holiday camps and international youth encounters, the ASJ gives its members a wide range of insights into the way of life and culture of young people from other nations.

ASJ am Puls , the magazine of the Arbeiter-Samariter-Jugend, is published every four months . 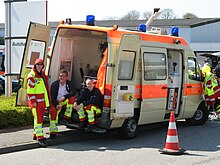 An ASB ambulance and crew

A typical ASB ambulance on a mission

The core tasks include:

On September 14, 2010, Plusminus reported on the ASB's unfair methods of recruiting new members. The ARD business magazine accused the aid organization of recruiting private pushers in ASB clothing and with ASB vehicles on the basis of false facts (the federal government would have cut 15,000 community service posts or provided its funds depending on private donations). The ASB Berlin confirms on its homepage the use of “independent sales representatives” who work as “employees of an advertising agency” and receive a commission of 40 euros per member canvassing. With an annual fee of 50 euros and a membership of an average of 10 years, it pays off.

On October 1, 2013, ASB became a member of the German Donation Council . He sees it as his task to uphold ethical principles in donations in Germany. In contrast, the ASB does not bear the DZI donation seal . According to his own statements, he made a conscious decision not to apply for it. The reasons given include the costs for the DZI donation seal, which would currently amount to 12,000 euros plus VAT for the ASB. The association would prefer to use this sum for its charitable tasks. Another reason given is the organizational structure: “The ASB is a federal network of over 200 regionally active, mostly independent associations. Rather, the DZI guidelines ideally assume a nationwide donation organization. "

After the cancellation of a first aid course for the AfD parliamentary group , the association received criticism from the AfD regarding its political independence. The association justified the rejection with its own code of values, which included "a clear stance against right-wing populist and right-wing extremist politics", as well as the history of the association, which was itself a victim of right-wing extremism and was expropriated and smashed by the National Socialists in 1933. Therefore, one rejects business relationships with the AfD.

In a test of the transparency of the effects of 50 donation organizations published by Phineo on behalf of Spiegel Online in 2014 , ASB Deutschland e. V. only a value of 1.4 out of 5 possible points. The organization landed on one of the last places of the 50 tested organizations. In 2016 the Phineo study was repeated, whereby ASB Germany e. V. improved only slightly with a value of 1.7 out of 7 possible points and once again landed in last place.

The 2016 study itself says: "This means that PHINEO cannot assess whether the reported effects have actually occurred and financial resources have been used in detail according to the organizational information - but only how the organizations report on it in their external presentation."