The main station with the first ring in front of it

The Wiesbaden Central Station is the main hub of the Hessian state capital Wiesbaden . It is a terminus on the southern edge of the city ​​center and is frequented by more than 40,000 travelers every day, which puts it in second place in Hesse next to Darmstadt main station and behind Frankfurt main station - measured in terms of the number of passengers. The timetable here shows around 256 connections every day, 13 of them in long-distance traffic (exclusively ICE ), 115 regional trains and 128 S-Bahn trains . Wiesbaden Central Station is only a through station for two pairs of ICE trains and the RB10 trains; for all other trains it is the start or end station.

The main train station is on the edge of downtown Wiesbaden . At the time of its construction in 1906, it was located on the outskirts, at the southeastern beginning of the then newly created Ringstrasse (Kaiser-Friedrich- and Bismarckring), which extends in a quarter arc to the west around the historic pentagon . The town planning insisted that the building would continue to develop towards the station. But that only happened to a limited extent. The development of the city came to an abrupt end during the First World War . The area of ​​the former railway facilities of the old stations remained largely undeveloped. The undeveloped area gave Wiesbaden a green strip that has largely been preserved to this day, in which, among other things, the Reisinger fountain systems were built.

Next to the reception building is the Lilien-Carré , which was newly opened in March 2007, on the site of the former main post office.

Today's main train station is located in the south-east district and replaced three train stations in the city center, all three of which were located next to each other in the area of ​​today's exhibition grounds ( RheinMain CongressCenter ) and the state museum . These goods:

A fourth railway line was added when, in 1889, the Langenschwalbacher Bahn (now Aartalbahn ) began operating from Wiesbaden to Bad Schwalbach and later to Diez an der Lahn.

A new train station was necessary to cope with the growing number of passengers in the then emerging spa town.

The main train station in 1906 shortly after it opened

Entrance to the Kaiserpavillon (today destroyed) on platform 1

Preliminary planning for relocating and converting the terminus to a through station was discarded due to the fact that the distance to the city center was almost three kilometers longer.

The Wiesbaden main station was built from 1904 to 1906 according to plans by Fritz Klingholz in elaborate neo-baroque forms. It thus corresponded to the need for representation of the world spa town of that time and also offered a dignified welcome to Kaiser Wilhelm II , who came every year in May, and replaced the three existing train stations that were closed. The station was opened on November 15, 1906 under the name Wiesbaden - still without the addition "Hauptbahnhof". The first scheduled train entered the new station at 2:23 a.m. The emperor awarded medals and honorary titles to a number of those involved. However, the Wiesbaden population was initially not very enthusiastic about the new train station, as it was relatively far from the city in the area at that time. The city still benefits from the relocation today, however, as the abandonment of the previous train stations created a green strip (between the main train station and the Rhein-Main Congress Center) that still exists today.

In 1906 the depot started its work, which was expanded several times in the following years.

At the same time, Wiesbaden received a new freight yard , which was laid out in Wiesbaden-Dotzheim , was given the name Wiesbaden West and went into operation on November 28, 1904, including the access route from the Waldstrasse branch. The previous freight yard, located south of the old train stations and also the new central station, was named Wiesbaden Süd , but after the opening of Wiesbaden West only served general cargo traffic .

As early as the spring of 1907, the railway administration discovered that the new platform halls were very heavily soiled by the steam locomotives .

During the Allied occupation of the Rhineland , there were numerous acts of sabotage by German railway personnel and third parties against the regional railway operated by the French occupying forces in their area . On June 26, 1923, a bomb attack was carried out on the counter hall. Two travelers were injured, one of them seriously. When the situation between the German Reich and the occupying power eased in the course of 1924, Wiesbaden Hauptbahnhof was one of the few train stations in the occupied area where the Deutsche Reichsbahn was allowed to open a ticket office and sell connecting tickets there for travelers traveling to the unoccupied area .

The station, which until then only traded as Wiesbaden , was renamed Wiesbaden Hauptbahnhof on October 7, 1928 .

In 1981 the depot was closed, the wagon plant existed until May 28, 1995. On September 25, 1983, the main station was affected by a line closure. Passenger traffic to Bad Schwalbach was discontinued, and the northern section of the Aartalbahn followed three years later . One of the late effects was the shutdown and dismantling of track 11, so that the station now only has 10 tracks.

Around the 1990s, Wiesbaden City trains commuted to the neighboring main train stations in Mainz and Frankfurt am Main .

Wiesbaden Central Station is connected to the Cologne-Rhine / Main high-speed line , which opened in 2002, via the 13.0 km long Breckenheim – Wiesbaden line.

Around 1987 consideration was given to building an underground station under the existing train station as part of the new Cologne – Rhine / Main line, which was to be connected to the high-speed line by a 20 km long Taunus and city crossing. At a cost of 700 million DM, two long-distance trains per hour and direction should run over the route.

This connection was the subject of extensive studies and discussions around 1990. Three variants were examined:

A route under the Wiesbaden urban area with a train station in a north-south position was rated as particularly critical. In total, this variant would have required 10.2 km of tunnels driven by miners . The east-west variant, whose tunnels would have been 30 to 100 m below the groundwater surface, was also rejected . The hydrological situation under the city of Wiesbaden was rated as extremely difficult, with numerous interconnected groundwater levels and high pressures that should not have been lowered. After test drilling, the underground of the imaginary inner city tunnel turned out to be heterogeneously interspersed with rubble. According to the experts, projects that are comparable in terms of structural engineering and corresponding conditions have not been implemented to date (1991); the construction time would probably have been longer than that of the rest of the route.

In August 1991, the state of Hesse, the city of Wiesbaden and the then Deutsche Bundesbahn agreed on a ground-level connection to the main station via a link to the new line further east. The realized variant Wiesbadener Kreuz was rated with the best cost-benefit ratio. An essential argument is the expected in an expert opinion, by far the most favorable passenger acceptance of a connection to the existing train station; In principle, extensive correspondence on other local public transport was only possible in Wiesbaden Central Station. Furthermore, the variant largely corresponds to the route variant favored by the nature conservation and environmental associations.

A clasp that would have branched off the realized connection route and threaded along the A 66 towards Frankfurt in a southerly direction into the new line and exclusively served regional traffic was not implemented.

As part of the connection to the new line, a platform in Wiesbaden main station was expanded to the length of two ICE trains. The federal government assumed the costs of 1.7 million euros.

In 2003 and 2004, Wiesbaden Central Station was extensively renovated and modernized for 25 million euros. Between mid-2006 and March 2007, the forecourt was redesigned to the tune of 1.5 million euros. The modernization was originally supposed to be completed with the opening of the high-speed line to Cologne, but was postponed several times due to a lack of funds.

As part of the economic stimulus programs, the hall roofs have been renovated since the end of 2010 at a cost of 35 million euros. The work was completed in autumn 2013. Since May of the same year, the train station has housed a bicycle station.

The station building consists of five connected platform halls with originally eleven tracks (today only ten are in operation), a wide arched cross platform in front of it , which extends to the east beyond the platform halls, and one arranged at right angles to it - about at the height of the im East platform 1 - also vaulted reception hall.

The exterior is made of red sandstone and has rich neo-baroque shapes. The highlight is a 40 m high clock tower with a curved dome to the side (east) of the reception hall . The western (former) entrance is surmounted by a copper dome . The roof is decorated with green tiles .

The inside of the building - in contrast to its outside - is made of yellow sandstone. The actual platform hall consists of a steel and glass construction .

After its renovation in 2004, the station was largely given its original appearance.

With the commissioning of the station in 1906, a depot was also set up, which is partly on the Biebrich boundary, as can be seen from the boundary stone in the immediate vicinity. It had a later expanded to 14 items, first 13-position roundhouse . In 1908 a second round shed and a 55 meter high water tower were built, which were demolished in 1977. In 1981 the depot was closed, the wagon plant initially existed as part of the depot in Mainz-Bischofsheim . The second shed was demolished in 1983, and the first one built in 1992. The wagon factory was closed on May 28, 1995. One of the turntables had overhead lines and was in operation for even longer, and was also used to turn steam locomotives on historic special trains. 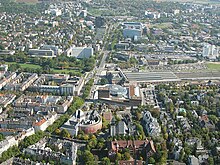 Since December 2001 the main station has been connected to the long-distance network of Deutsche Bahn AG with the following lines :

The main station is the end point of three lines of the S-Bahn Rhein-Main , which each run every half hour.

A train of the former line RE / SE 10 on departure

In addition, the main train station is connected to the following regional transport lines:

The main station is also an important inner-city and regional bus - node .

The ZDF obtained its time signal from the station clock in Wiesbaden Central Station until at least the 1980s .

Railway stations and stops in Wiesbaden