Niederrad has been a district of Frankfurt am Main since July 1, 1900 .

Niederrad is located south of the Main , about 2.7 km from the Frankfurter Hauptwache , and borders the Gutleutviertel to the north, Sachsenhausen to the east and Schwanheim to the west . In the south it is surrounded by part of the Frankfurt city forest.

The district is mainly designated as a residential area. It includes the Bruchfeldstrasse housing estate , which was built in the 1920s under urban planner Ernst May , as well as the Adolf-Miersch-Siedlung and the Mainfeld-Siedlung. The purchasing power is 22,067 euros per inhabitant (as of 2009) . Niederrad is the location of the western part of the Frankfurt University Hospital .

The district, which was incorporated into Frankfurt in 1900, was first mentioned in 1151 as Rode (clearing) in the then Dreieich Wildbann . At that time the place already consisted of 15 houses. The mention of the Sandhof , a royal moated castle, was first made in 1193 in a document that testified that the knight Konrad von Hagen had acquired 200 acres of land. The forest between Frankfurt and Niederrad, which was later to be referred to as part of the Frankfurt City Forest , was acquired by the Free Imperial City of Frankfurt in 1372. As it was located directly on a loop of the Main, the rural population in Niederrad developed a secondary activity for washing and dyeing especially since the arable land was very limited. For a long time, the people of Frankfurt referred to it as the “washer village”, as soon more than 100 companies were cleaning and then bleaching the laundry in a soft water brook (called Großer Waschbach ). 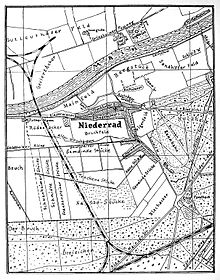 In 1850 Niederrad had 2000 inhabitants. 15 years later the racecourse opened and again after 15 years a railway bridge to Frankfurt over the Main was built in 1880 , the Main-Neckar Bridge . The construction of a needle weir and a sluice (1883) as well as the commissioning of the continent's first mechanical sewage treatment plant (1887) followed together with Seckbach and Oberrad in the city of Frankfurt before the final incorporation . At that time on July 1, 1900, Niederrad had 8,800 inhabitants. In 1881 the Niederrad cemetery was opened.

The businessman Eugen René Lacroix built his now international delicatessen company in Niederrad in 1925 with 350 employees , where he made the turtle soup that made him famous. A contemporary witness mentioned that “the whole yard was full of turtles” and “Lacroix eyed every one” . The Niederräder plant ceased to exist in 1994; after its demolition, apartments were built there.

After the Second World War Niederrad had a population of 18,000 (1950) and grew continuously in the following years. Eleven years later there were 25,000 inhabitants, and with the construction of the “Bürostadt im Grünen”, now called Bürostadt Niederrad , which began in 1963 , the district also became known in the business world.

The old station, closed in 1977 because of the construction of the S-Bahn

Niederrad is connected to the Rhein-Main S-Bahn network as well as to the city's tram and bus network.

The Frankfurt-Niederrad station is a stop on the S-Bahn lines S7, S8 and S9 as well as the regional trains RE2 ( Koblenz main station ) and RE70 ( Mannheim main station ). It was built in 1977 as a high station for S-Bahn operations and replaced the station further north. The train station is located on Lyoner Strasse on the eastern border with the Niederrad office district. Line S7 runs from Riedstadt-Goddelau via Niederrad to Frankfurt Central Station . Lines S8 and S9 run from Wiesbaden Hauptbahnhof either via Mainz Hauptbahnhof (S8) or Mainz-Kastel (S9), Rüsselsheim , Frankfurt Airport , Frankfurt Stadium , Niederrad, Frankfurt Hauptbahnhof , Frankfurt-Hauptwache and Offenbach Ost to Hanau Hauptbahnhof . At Niederrad train station there are direct transfer options to tram lines 12 and 19 and to bus lines 78 and 79. From September 1996 to May 2006, Frankfurt-Niederrad was also a scheduled stop for individual long-distance trains operated by Deutsche Bahn.

The tram lines 12, 15, 19 (only runs at certain times), 20 (only runs during events in the Commerzbank-Arena) and 21 have their origin in the network of the Frankfurter Waldbahn . Line 12 connects Niederrad with Schwanheim, Sachsenhausen, Hauptbahnhof, city center, Nordend, Bornheim, Ostend and Fechenheim. Line 15 ends in Niederrad at Haardtwaldplatz and runs from there via Sachsenhausen, Südbahnhof and Oberrad to the Offenbach city limits. Line 19 is a pure school line with only two journeys a day between Schwanheim, Niederrad, Sachsenhausen and Südbahnhof. Line 21 runs from the stadium (at times only to / from Oberforsthaus) via Niederrad, Sachsenhausen, Hauptbahnhof and Gallus to Nied; Line 20 is used as an amplifier line between the stadium and the main station.

Several cycle paths run along the banks of the Main :

The women's courtyard with its archway

Bruchfeldstrasse with “Zigzaghausen” and the thermal power station
→ Main article : List of cultural monuments in Frankfurt-Niederrad