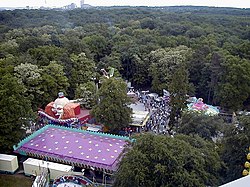 The fairground at the Wäldchestag (2002)

In Frankfurt am Main, Wäldchestag is the name of the Tuesday after Pentecost , on which a traditional folk festival takes place at the Oberforsthaus in the Frankfurt city forest . The festival area is located in the Niederrad district near the Commerzbank-Arena . Until the 1990s, most of Frankfurt's shops were closed in the afternoon on that day, and workers were off from 12 noon. That is why the Wäldchestag was jokingly popularly called Frankfurt's national holiday .

History of the forest day

Caricature in the Frankfurter Latern on February 9, 1889

The folk festival on the Wäldchestag has been known since the end of the 18th century, but there were spring festivals on the third day of Pentecost in Frankfurt as early as the Middle Ages . The guild of bakers has been celebrating its guild festival on the Pfingstweide in the east of Frankfurt, where the Frankfurt Zoo is located today, since the 14th century . Also in the week after Pentecost, the cow dance was celebrated, in which the cattle maids and shepherds drove the cattle of the citizens in a happy procession to the summer fattening in the city forest. The Oberschweinstiege and Unterschweinstiege inns still take their names from them today .

In addition to the medieval baker's dance and the cow dance, there was a third reason for a folk festival, namely the annual allocation of wood to the citizens. The city forest had belonged to the city of Frankfurt since 1372, when Emperor Charles IV ceded parts of the Königsforst Wildbann Dreieich to it to repay his debts . Since then, the Frankfurters have officially been allowed to collect wood for the winter in the forest on that day. According to another reading, firewood auctions took place that day, and the party represented the cozy part after the end.

Presumably, the Frankfurt citizens and their servants who moved into the city forest on the Waldchestag brought food and drinks with them from home. It is not exactly known when this custom became a boisterous festival. The oldest literary mentions are from the early 19th century. In 1802, an unknown Frankfurter composed a mocking poem about the swarms of people who cavort in the woods on the “Wäldchestag” as if there was only something to eat on that day, wasting what they had laboriously saved all year round.

In 1818 Anton Kirchner wrote in his Views of Frankfurt am Mayn that the grove has been a favorite place of the Frankfurters since time immemorial. “On a little spot that is surrounded by tall beech trees, there are tables and benches around a fountain that gushes with excellent water ... Ham and sausages, roasts and poultry, cakes and pies, are spread out on bare bowls and clean tableware in the grass ". The fountain mentioned was probably the Königslacher fountain at the Oberforsthaus. It was built in 1729 for the riding chief forester Heinrich Carl Baur von Eysseneck and was immediately given the municipal license , i.e. H. the forester was authorized to distribute food and drinks to the guests passing by. Since it was on an important highway to the southwest, the place was conveniently located. The future emperors Charles VII , Joseph II and Leopold II stayed here, among others , before they were led into the city in a solemn triumphal procession.

In World War II the Oberforsthaus in was air raids on Frankfurt by aerial bombs destroyed his remains had 1,963 the feeder to the A 3 soft. Only the horse stable remained.

With the construction of the Main-Neckar-Bahn , the traffic connection of the wood improved, which is now also attractive for guests from the region. Friedrich Stoltze wrote in his poem Wäldchestag in 1853 :

"In the forest, everyone has to
By coach, on horseback, by railway,
By boat and on foot.
Un all shops un Condorn,
The are closed; Everything!
The Zeil lends like godforsaken
Even the Dalles is empty ! ... "

For the year 1868, after the end of the Free City of Frankfurt , visitor statistics are available for the first time. At that time around 25,000 visited the Wäldchestag, with a population of almost 90,000. Instead of private self-sufficiency and the flying Ebbelwoi and pretzel boy , the commercial serving of beer and cider was increasingly taking place . The Wäldchestag played an increasing role in the cultural life of the city, because the large number of choral societies used it for public appearances. For the first time, a public concert at the Oberforsthaus has been handed down for the Wäldchestag in 1834. It took place in honor of Felix Mendelssohn Bartholdy , who at that time headed the Cäcilienverein in Frankfurt.

In 1883 Adolf Stoltze wrote : "In the griene Laub lends poor and rich, the Beese and the pious". The seventh picture of his comedy Alt-Frankfurt , made in 1887, is set on the Wäldchestag. It ends with a big thunderstorm , which is mandatory for long-established Frankfurters for a proper Wäldchestag.

Since 1889, the Frankfurter Waldbahn , a steam tram , has made it easier for Frankfurt citizens to visit the Wäldchestag. The forest railway line from the Untermainbrücke to Schwanheim led over the Oberforsthaus directly past the festival area.

The climax and temporary end of the Wäldchestag tradition was the year 1914. In April 1914, the full-size Oberforsthaus was built in the Frankfurt Festival Hall , complete with trees, shooting ranges, the Königsbrünnchen and gypsy camp. The Frankfurt choral societies and the Frankfurt military marched in the hall. One month later, the real Wäldchestag was celebrated for the last time in the city forest: from 1914 to 1925, all celebrations in the forest were canceled due to the First World War and the subsequent inflation .

It wasn't until 1926 that the city had the hill prepared for the celebrations for the first time. In 1933, after they came to power , the National Socialists made the Wäldchestag National Community Day . In 1939 the Second World War broke out and again put an end to the festival for many years. In World War II the Oberforsthaus in was air raids on Frankfurt by aerial bombs destroyed his remains had 1,963 the feeder to the A 3 soft. Only the horse stable remained.

In 1949 the magistrate still refused to prepare the city forest for the Wäldchestag, especially since numerous duds had made it a dangerous place to stay, and instead offered to hold the celebrations on the ruins of the Römerberg . The Frankfurters, however, boycotted the Wäldchestag on the Römerberg and, like their ancestors, moved privately into the forest. The city then gave in: On May 30, 1950, the first official post-war Wäldchestag took place at the old location near the Oberforsthaus.

Since the 1960s, the fairground booths and rides have opened over the Whitsun weekend. In 1983, the Wäldchestag was overshadowed by the Frankfurt flight conference . On Pentecost Sunday, May 22, 1983, a Canadian starfighter crashed onto Bundesstraße 44 as part of a flight demonstration at Rhein-Main Air Base . In a car that was hit by the wreckage, a six-member Frankfurt pastor family died on their way to a Whitsun excursion. The scene of the accident was only a few hundred meters from the Wäldchestag area.

By the beginning of the 1990s, many Frankfurt companies, especially retailers, closed at 12 noon on the Wäldchestag and released their employees to attend the folk festival. When the Carnival parades in Germany were canceled in 1991 due to the second Gulf War , many companies also canceled the previously associated leisure time regulations for Carnival and the Wäldchestag. At the beginning of 1994 the Federal Labor Court confirmed the cancellation of the time off as legal. The introduction of statutory long-term care insurance in 1995 marked the end of leisure time on the Wäldchestag. In order to compensate for the increase in non-wage labor costs , the number of public holidays was discussed and, ultimately, the day of penance and prayer was abolished. As a result, most companies and institutions in Frankfurt also canceled the afternoon forest day off.

Special line “ Lieschen ” during the Wäldchestag at its final stop near the tram stop “Oberforsthaus”, Whit Monday 2007

Since the 1960s, the outward appearance of the Wäldchestags area has been a fair with carousels , a Ferris wheel , roller coaster , shooting galleries , bumper cars and other rides. In the multicultural society , the culinary offer, which used to be limited to bratwurst , kebab skewers , beef sausage , hand cheese , pretzel and hard cakes , has expanded and internationalized significantly. In addition, various hosts offer live music performances in a wide range of styles. A total of 174 showmen and dealers were admitted to the 2006 Wäldchestag. However, it is the special flair of the Wäldchestag that it is not so much a fair with extreme rides (that can be found in Frankfurt more at the Dippemess ), but a place to enjoy interesting culinary and musical offers.

On the days of the Wäldchestag, public transport is additionally increased by tram line 20 (main station - Oberforsthaus (Wäldchestag) - stadium) and the bus line 61V (Südbahnhof - Oberforsthaus (Wäldchestag) - airport). In addition, the " Lieschen ", the popular Wäldchestag special line of the Frankfurt tram , ran until 2013 for a single-track connection of the former Frankfurter Waldbahn , from the special stop "Riedhof" via Mörfelder Landstraße to the current end of the track just before the turning loop at the Tram stop "Oberforsthaus" was used. However, operations have been suspended since 2014, as the line would have had to be repaired for 1.5 million euros due to the new line over Stresemannallee. Instead, two 50-year-old buses alternating between Frankfurt Südbahnhof and Oberforsthaus will replace the Lieschen. Many guests also come from the surrounding communities on foot or by bike and thus combine a visit to the Wäldchestag with a trip through the Frankfurt city forest .

The number of visitors has decreased in recent years. For one thing, offices and shops no longer close in the afternoon today. On the other hand, the Wäldchestag increasingly faced competition from other folk festivals in and around Frankfurt. The Museumsuferfest , the Rheingau Wine Week on the Freßgass and the Frankfurt Christmas Market not only attract larger crowds than the traditional Wäldchestag, they are also more attractive to tourists . The city ​​council therefore commissioned the city ​​council in February 2005 to create a concept for securing and promoting the traditional Frankfurt festivals Dippemess , Wäldchestag and Mainfest , which the city council presented in September 2005.