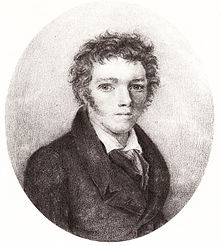 Wilhelm Hauff after a painting by J. Behringer , pastel chalk 1826

Wilhelm Hauff's father, August Friederich Hauff, was government secretary and later cabinet ministerial registrar in Stuttgart. Wilhelm Hauff had an older brother Hermann (* 1800) and the two younger sisters Marie (* 1806) and Sophie (* 1807). After the father's death in 1809, the mother and the children moved to live with her father Karl Friedrich Elsäßer in Tübingen on Haaggasse.

From 1809 to 1816, Hauff attended the Schola Anatolica , the former Latin school in Tübingen , and from 1817 , after passing the state examination, the monastery school in Blaubeuren . From 1820 to 1824 he studied theology at the University of Tübingen on a scholarship from the Evangelical Monastery of Tübingen and was awarded a Dr. phil. PhD. He was a member of the Germania Tübingen fraternity . Some of the texts of student songs printed in the Kommersbuch date from this period .

Hauff worked from 1824 to 1826 in Stuttgart with Ernst Eugen Freiherr von Hügel as a private tutor and then traveled through France and northern Germany. In 1825 he came out with the satire The Man in the Moon , in which he virtuously imitates the style and manner of the trivial author Heinrich Clauren and his story Mimili and exposes it to ridicule. Two years later he exposed the literary bluff with the controvers sermon about H. Clauren and the man in the moon .

In January 1827 he became editor of the Cottaschen Morgenblatt for educated classes . In February he married his cousin Luise Hauff (* January 6, 1806; † July 30, 1867), whom he met in Nördlingen in 1823 and to whom he had become engaged in 1824. In August he went on a study trip through Tyrol , during which he wanted to collect material for a planned work on Andreas Hofer . During the trip he contracted typhoid and returned sick.

The daughter Wilhelmine was born on November 10, 1827 († January 2, 1845). Hauff died of typhoid fever eight days later. The family's grave is in the Hoppenlaufriedhof in Stuttgart.

Numerous streets are named after Wilhelm Hauff. Hauff monuments exist at Lichtenstein Castle and in Stuttgart . The Wilhelm Hauff monument on Stuttgart's Hasenbergsteige , unveiled in 1882, was created by the architect Christian Friedrich von Leins and the sculptor Wilhelm Rösch . In Lichtenstein-Honau , below Lichtenstein Castle, there is a Wilhelm Hauff Museum , in Baiersbronn the Hauff Fairy Tale Museum is dedicated to the author of the fairy tale The Cold Heart and the earlier life of raftsmen, charcoal burners, glassmakers and wood merchants.

On the 150th anniversary of his death in 1977 , the Deutsche Bundespost issued a special postage stamp designed by Elisabeth von Janota-Bzowski . In Hauff's memory, the Wilhelm Hauff Prize was donated to promote children's and young adult literature.

Wilhelm Hauff's short literary creative period began in 1825 with the publication of some novellas (Memoirs of Satan, Othello) and his first fairy tale almanac.

The Germanists Gabriele von Glasenapp and Wolf-Daniel Hartwich pointed out that Hauff was anti-Jewish in some works such as Jud Süß , Mittheilungen from the memoirs of Satan and Abner, the Jew who did not see anything through drawings of the character and the physiognomy of his figures Reproduce stereotypes and clichés of his time.

Hauff's fairy tales fall into the late romantic literary phase after the strict censorship provisions of the Karlsbad resolutions in 1819. The first volume around the framework story The Caravan contains oriental fairy tales. The second volume leaves the purely oriental space of action, for example Schneeweißchen and Rosenroth , taken over from Wilhelm Grimm , are part of the European fairy tale tradition. The third volume with the frame story Das Wirtshaus im Spessart deals more with myths than fairy tales; the Black Forest legend The cold heart is the best known of these legends.

Illustration from the ghost ship

First edition of the fairy tale almanac from 1828

Not included in the almanacs is the brief legend Der Reußenstein , in which Hauff describes how a giant had Reußenstein Castle built (today's Reußenstein ruins ). 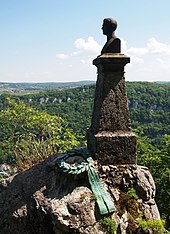 Wilhelm Hauff monument at today's Lichtenstein Castle on the Albtrauf .

Compared to ETA Hoffmann , who was a good friend of Hauff, his fairy tales are "more earthy, more compact (...) happiness is rooted in the home, in marriage and family".

The historical novel Lichtenstein was until the 20th century next to Hauff's fairy tales his most famous work. Duke Wilhelm von Urach, a member of a branch line of the ruling House of Württemberg, was inspired by the novel to acquire the old forester's house near the site of the former Alt-Lichtenstein Castle and at the beginning of the 1840s on its site above the Echaztal near Lichtenstein- Honau to build a new castle modeled on the former knight's castle, Lichtenstein Castle, which still exists today . The ruins of the castle, which was destroyed at the end of the 14th century, are a few hundred meters away.

An opera, plays and dramatizations for the silhouette theater also contributed to the popularization of the novel.

Family grave of Wilhelm Hauff, his wife Luise and their daughter Wilhelmine, who died young, in the Hoppenlaufriedhof in Stuttgart 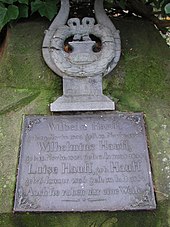 Tomb on the family grave, adorned with the symbol of a lyre and a laurel wreath . The life dates of the family are on the bronze plate.

Student songs and other songs

Numerous films are based on Hauff's fairy tales - but other of his subjects have also been implemented:

Ingeborg Bachmann wrote the libretto for Hans Werner Henze's comic opera The Young Lord in 1964, based on the parable Der Affe als Mensch (The Young Englishman).

Zwerg Nase , a burlesque opera in five pictures by Walter Furrer, was completed in 1952. It has not been performed as a whole, only the kitchen boys' ballet under the title Scherzo drolatique from the 4th picture (arrangement for large orchestra) was premiered in 1973 as part of a youth concert in Aachen; presumed date May 3, 1973.

Hauff was born in 1802 as the son of the government council secretary August Friedrich Hauff in a rented apartment on the 2nd floor of house number 1358 in Kleiner Graben. The large, three-story house with shops on the ground floor extended over 9 window axes on the upper floors. After the renaming of the Kleiner Graben in 1811, the house on the corner of Kreuzstrasse was given the address Eberhardstrasse 23. The building stood on the site of today's house, Eberhardstrasse 33, at the corner of Dornstrasse, where the building law office is located ( location ). There is a memorial plaque at the entrance to the house with the note: "This is where Hauff's birthplace stood until 1944". 48.773637 9.178782

After four years, Hauff's father was transferred in the spring of 1806 as court clerk at the highest court in Wuerttemberg, the higher appellation tribunal in Tübingen. The family lived for two years in a rented apartment in the house Haaggasse 15 in Tübingen, on the ground floor of which was the "Restoration Schottei", after which the house was named Schottei. In 1808 Hauff's father was appointed secret secretary to the Ministry of Foreign Affairs, and the family moved back to Stuttgart to the house at Eberhardstrasse 23. When the father died on February 2, 1809 at the age of only 37, his mother, Wilhelmine Hauff, moved with them the family returned to the Schottei, in which since 1807 the chief appeal officer Karl Friedrich Elsäßer , Hauff's maternal grandfather, lived.

From September 1817, Hauff attended the Blaubeuren seminar for three years . From 1820 to 1824 he visited Tübingen as a scholarship holder of the Evangelical Monastery and from the second semester lived again in the Schottei, where he occupied a room on the first floor.

From October 1824 to April 1826 Hauff was employed in Stuttgart as court master by Ernst von Hügel, the president of the war council . He lived on the 2nd floor of the old War Ministry on Charlottenplatz. Inspired by the view of Kanalstrasse with the restoration to the box and today's Stuttgart Writers' House , he wrote the novella " Free hours at the window " in 1826 , in which the narrator observes his neighboring house.

On February 13, 1827, Hauff married his cousin Luise Hauff in Enzweihingen. He moved into 5 rooms with her in a rented apartment in Hartmann's house at Gartenstrasse 264 in Stuttgart, today Fritz-Elsas-Strasse 49.