Lichtenstein is a municipality in Baden-Württemberg with 9190 inhabitants (as of June 30, 2017). It belongs to the Neckar-Alb region and the peripheral zone of the European metropolitan region of Stuttgart . It is located on the Albtrauf , the steep northern edge of the central Swabian Alb , about ten kilometers south of the district town of Reutlingen . The seat of the municipal administration is the Unterhausen district. Lichtenstein is part of the Swabian Alb biosphere area with 7.3% of its municipal area . The name of the community is derived from its most famous landmark, Lichtenstein Castle , located on a rocky promontory on the Albrand above the western flank of the upper Echaz valley .

The districts of Honau and Unterhausen are in the valley of the Echaz , a 23-kilometer-long tributary of the Neckar that rises directly below the Albtrauf in Honau . In contrast, the eastern district of Holzelfingen with the somewhat remote hamlets of Göllesberg and the Traifelberg, which belongs to Honau, is already on the plateau of the Swabian Alb about 200 to 300 m higher. Holzelfingen and Traifelberg are connected to the largest district of Unterhausen by the Albaufstiege Holzelfinger Steige and Honauer Steige (passage of the federal highway 312 ). The most important touristic excursion destinations of the municipality, Lichtenstein Castle and the Nebelhöhle , located in the western part of the district, are also located in the hilly areas of the so-called Middle Kuppenalb on the Alb plateau , which are characterized by mixed forest . At the nearby Gießstein is the transmitter Unterhausen .

Lichtenstein is bordered by four communities that also belong to the Reutlingen district . The town of Pfullingen is located in the north, largely belonging to the Alb foreland ; the other neighboring communities are located on the Alb plateau: St. Johann in the east, Engstingen in the south and Sonnenbühl in the west .

The three former communities of Holzelfingen , Honau and Unterhausen form the districts of the community of Lichtenstein. The two districts of Honau and Holzelfingen also form localities within the meaning of the Baden-Württemberg municipal code, each with its own local council and local mayor as its chairman. 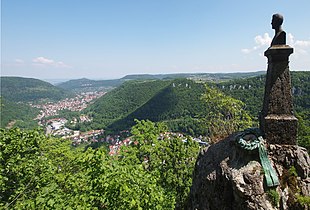 View from the Hauff monument near Lichtenstein Castle to the districts

Postcard from 1919: View to the north over the Echaz valley with Lichtenstein Castle in the left center of the picture

View in south-east direction of the historic Honau and the Traifelberg with its striking rock chain (postcard from 1905). The Honau – Lichtenstein cogwheel railway , which was closed in 1969, runs diagonally through the picture

From prehistory to the high Middle Ages

Archaeological evidence of Alemannic settlements was found in both Honau and Holzelfingen . Furthermore, finds of Roman utensils in the Honau district indicate that the area of ​​today's Lichtenstein could have been on a Roman road in antiquity .

During the rule of the Franks in the Middle Ages, the places in what is now the municipality were part of the Pfullichgau of the Duchy of Swabia .

First evidence and developments of the localities

The name Holzelfingen probably goes back to the old first name Holzulf . The first mention as Holtelvingen was in 1220. At that time the Greifenstein Castle (now in ruins) inhabited by the Lords of Greifenstein that the reputation of the passage of time robber barons were increasingly feared by the rural population and hated. After the neighboring noble family, the Lords of Lichtenstein , had been defeated by the troops of Count Eberhard of Württemberg during the Imperial War in 1311 , Ritter Schwigger, the last known member of the Lords of Greifenstein, sold his estate, including Holzelfingen, to Württemberg in 1355.

Earlier than the neighboring communities, Honau fell to the House of Württemberg, first under the rule of the Counts of Achalm , always beset by the aristocratic houses in the area, the Lichtensteiners and the Greifensteiners.

Until the beginning of the 19th century, the places were subordinate to the Protestant monastery office Pfullingen of the Duchy of Württemberg since 1534 .

During the Thirty Years' War between 1618 and 1648, all the villages in what is now Lichtenstein's district were plundered and plundered several times by the Soldateska of the Landsknechts troops passing through.

From the 19th century to the present

The four old Württemberg towns of Holzelfingen and Honau as well as Oberhausen and Unterhausen were subordinated to the Oberamt Reutlingen following the establishment of the Kingdom of Württemberg in 1806 as part of the new administrative structure . In 1892 and 1893, the opening of the Echaz Valley Railway brought the connection to the route network of the Württemberg State Railways .

As early as 1930, the town of Oberhausen was incorporated into the community of Unterhausen. The administrative reform during the Nazi era in Württemberg led to membership in the Reutlingen district in 1938 .

After the Second World War, the villages fell into the French occupation zone and thus came to the newly founded state of Württemberg-Hohenzollern , which was incorporated into the state of Baden-Württemberg in 1952.

On January 1, 1975, the communities Holzelfingen and Honau were incorporated into Unterhausen. The community was renamed Lichtenstein.

The municipality of Lichtenstein was named after Lichtenstein Castle , which towers above the upper Echaztal and was built in the early 1840s according to the ideas of a medieval castle at the time, commissioned by Count Wilhelm von Württemberg (later Duke of Urach). The inspiration for this building in the Romantic style was provided by the historical novel Lichtenstein by Wilhelm Hauff , who in turn was modeled on the former Lichtenstein Castle , which was built between 1150 and 1200 by the Lichtenstein family, which died out in the late Middle Ages; - a castle that was destroyed by the troops of the free imperial city of Reutlingen during the Swabian city war at the end of the 14th century and then fell apart. The remains of the ruin are now only a few hundred meters southeast of the location of the current castle.

Since the Reformation in Württemberg in 1534, the villages were evangelical. On the one hand, there is currently the Protestant overall parish of Unterhausen-Honau. This Protestant parish has three historic churches. The Johanneskirche , whose beginnings date back to the 10th century, is located in the Unterhausen district. In the former Oberhausen district, the Erlöserkirche and the Gallus Church in Honau are used as places for worship. Two parish halls and a kindergarten also belong to the overall parish. On the other hand, a separate parish is the Protestant parish of Holzelfingen around the St. Blasius Church , whose pastor also serves the St. Johann suburb of Ohnastetten . The parishes belong to the Reutlingen church district in the Evangelical Regional Church .

The Evangelical Methodist Church is present in Lichtenstein through three local parishes, which are looked after by a pastoral office. The churches of the Free Church are located in Unterhausen on Friedhofweg, in Honau on Heerstraße and in Holzelfingen on Honauer Straße.

For the Catholics there is the branch church of St. Brother Konrad in Unterhausen, which is looked after by the Pfullingen parish in the pastoral care unit Echaztal , and which covers all three sub-towns of Lichtenstein. This Roman Catholic community was established in 1926 and got its own church in 1935, the St. Konrad Church . It belongs to the Reutlingen-Zwiefalten deanery of the Rottenburg-Stuttgart diocese . The Catholic community also has a kindergarten.

The local councils of Holzelfingen and Honau each consist of nine members.

The mayor is elected for an eight-year term. The third and last term of office of Helmut Knorr ended on January 2, 2011. On January 13, 2011, the non-party graduate administration specialist Peter Nussbaum, who voted against the incumbent in the mayoral election on October 24, 2010 with 62.1% of the votes cast Knorr (26.7%) and two other candidates had prevailed in the first ballot when they were sworn in as Lichtenstein's mayor.

Coats of arms of the sub-municipalities:

Coat of arms of the former municipality of Oberhausen (incorporated into Unterhausen in 1930): 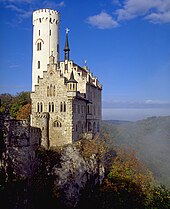 Economically, the community is characterized by medium-sized small and craft businesses. On the grounds of the Unterhausen (BSU) cotton spinning mill, which was closed in 1993 and which has been the municipality's largest industrial company with up to 380 employees for over 140 years, on the northern border of Lichtenstein, there is now an industrial park with branches of various small companies. The largest industrial company in Lichtenstein with around 200 employees is Baumann GmbH at the southern end of Unterhausen as the German branch of the Swiss company Baumann Federn AG . Otherwise heard Lichtenstein infrastructure especially for the catchment area of Greater Stuttgart , especially Reutlingen.

In particular on the Alb plateau, a relevant agricultural and forestry use of part of the municipal area is of economic and structural importance.

In the district of Honau, which has a national tourist attraction value due to the proximity of the Lichtenstein Castle, there is a regionally relatively well-known brook trout farm, which belongs to a local hotel and restaurant, where the trout is prepared in various ways as culinary Specialty applies.

Cogwheel and rail section of the cog railway in Honau

The Public transport is by the Verkehrsverbund Neckar-Alb-Donau guaranteed (NALDO). The community is located at Wabe 223. Bus routes to Reutlingen , Münsingen or Gammertingen run through the community . The Honau – Lichtenstein cogwheel section of the Reutlingen – Schelklingen railway line was dismantled as early as 1969 .

Cities and municipalities in the Reutlingen district