Gomadingen is a climatic health resort in the Großer Lautertal in the Reutlingen district , which is best known for the main and state stud Marbach and Grafeneck Castle . Gomadingen is part of the Swabian Alb biosphere area with 85% of its boundary .

Gomadingen is located in the valley of the Große Lauter , which rises in the Offenhausen district . The Sternberg is located above the village .

The following cities and communities border the community of Gomadingen, they are named starting in clockwise direction in the north and all belong to the district of Reutlingen :

In the Offenhausen district there had been a women's monastery since around 1260, which was known under the name Gnadenzell .

The main and state stud Marbach is the oldest state stud (state of Baden-Württemberg as sponsor) in Germany. Its expansion can already be proven under Duke Christoph von Württemberg (1550–1568) [1]. In 1817 it became the state stud of the Kingdom of Württemberg .

Grafeneck Castle , built around 1560 and used as the hunting lodge of the Württemberg dukes, is located on Landstrasse 247 in the Grafeneck district. In the 19th century it was used as a forestry office and in 1928 it was acquired by the Evangelical Samaritan Foundation, which set up a home for the disabled. During the National Socialist era , Grafeneck Castle served as a killing facility for a short period of time . Up until the end of 1940, 10,654 disabled and sick people were murdered by gas in the National Socialist Euthansasi Action (later Action T4) (cf. Sick murders during the Nazi era ). Most of them were transported there from southern Germany and burned in a crematorium on site. The French occupation forces returned the site to the Samaritan Foundation in 1946/47, which expanded it as a living space for disabled and mentally ill people and continues to operate it to this day. The development of the cemetery as a memorial site began as early as the 1950s. In 2005 the Grafeneck Memorial Documentation Center was finally built.

In 1812 the village of Offenhausen became part of the Gomadingen community. On December 1, 1971, Dapfen and Steingebronn were incorporated into Gomadingen. Steingebronn was first mentioned in the first half of the 12th century as Stainigebrunnon. The local lords, the Speth (1276 miles de Stainibrunn ... Späte), sat on the castle, which has since been abandoned. In 1562 the family sold the place with all rights to Württemberg. Steingebronn then belonged to the Office / Oberamt Urach and came to the Oberamt in 1808, later to the Münsingen district.

As early as 904, a St. Martin's Church in Dapfen was mentioned in the Königsgut , and a parish in 1275. In 1407 the church set in Dapfen was sold to Württemberg by Speth von Ehestetten, who introduced the Reformation. A Martinskirche was mentioned in Gomadingen in 1180. In 1275 the place was the seat of a parish and a deanery. In the Gomadingen hamlet of Offenhausen there was a Dominican convent of St. Maria Gnadenzell . In the 15th century it came under Württemberg suzerainty. In 1575 it was closed and a stud farm was established. In 1812 the settlement came to the community of Gomadingen. The monastery church served as a Protestant church from 1690 and was profaned in 1812. A parish church was first mentioned in Steingebronn in 1275. It was consecrated to Saints Philip, Walpurg and the Three Kings. The church set was with the Speth and then in 1420 came to the Propstei Güterstein and finally to Württemberg, which introduced the Reformation.

Coats of arms of the earlier municipalities

Gomadingen has had a partnership with the French Buis-les-Baronnies since May 14, 1999 .

Sternberg tower on the Sternberg

The highlight of the events in the community of Gomadingen are the stallion parades that regularly take place on the last weekend in September and the first weekend in October in the arena in the main and state stud Marbach , which can hold 10,000 spectators. In addition, the international eventing tournament that takes place in Marbach at the beginning of May is another equestrian highlight.

Every year, on the third weekend in September, the traditional slaughter festival takes place in Dapfen.

Traditionally, the Festival on Eiche takes place every year in July on the old Eichach sports field in Gomadingen. 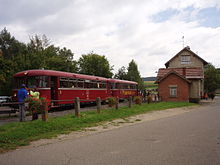 The state road 230 leads from the B 27 near Gomaringen through the municipality to the A 8 near Merklingen .

The Public transport is by the Verkehrsverbund Neckar-Alb-Donau guaranteed (NALDO). The community is located in Wabe 224. In 1893, Gomadingen and Marbach an der Lauter were connected to the railway network via the Reutlingen – Münsingen route (extended in 1901 to Schelklingen). In Gomadingen, a unit train station of type IIa was built for this , in Marbach one of type IIIa. Today regional trains stop Mondays to Fridays, mainly taking schoolchildren to and from Münsingen . Regional trains and special trains stop at it on Sundays from the beginning of April to the end of October, primarily to bring hikers and day trippers to their destination.

Wikisource: Gomadingen in the description of the Oberamt Münsingen from 1825  - sources and full texts

Cities and municipalities in the Reutlingen district