In the depths of the Black Forest , near the coal piles, lives Peter Munk, a young charcoal maker who is known everywhere as poor and dirty coal munk Peter. He lives secluded with his mother in a small forest hut. He cannot afford to indulge himself in the tavern. When one day, following the cheering and din, he steps into the bar, he is laughed at and mocked by the drunken guests. So it happens that he dreams more and more of money and prestige. When he wants to take beautiful Lisbeth as his wife, his poverty hurts him even more. Now he is hoping for an old tradition that says that a glass man lives deep in the forest and gives three wishes to a Sunday child when he recites the following verse:

Treasure houses in the green fir forest,
You are already hundreds of years old
You own all the land where there are fir trees
Only lets you see Sunday kids

Charcoal munk Peter goes in search of the treasure house. This first fulfills two of his wishes: to be able to dance better than Hannes, the king of the dance floor in the area, and to always have as much money in his pockets in the tavern as the rich Ezekiel. He also expressed the desire to have his own glassworks. The little glass man promises him everything he wants, but criticizes that he had not chosen carefully.

In a game of dice in the pub - the rich businessman Ezekiel is sitting across from him - Peter wins all the money after a while. When he is about to leave, Ezekiel asks if he can lend him a few thalers so that he can continue playing, because he simply cannot believe that he has been hit by a poor man. Peter agrees, but notices that his pockets are empty. Suddenly it occurs to him again that he wished the glass man in the fir forest had as much money in his pocket as Ezekiel in the tavern. When he laughingly shows his pockets open as evidence, he is thrown out as a fraud. Angry at the treasure house, Peter runs into the fir forest, this time to visit Holländermichel, a giant with a glass eye and a large scar over it, who is said to steal people's hearts and replace them with a stone. He promises Peter wealth and prestige in exchange for his heart. Peter agrees.

The cold heart makes him insensitive to any feeling - no pain, no fear, no love. After a short time he only has money and business on his mind and now chases away the poor himself when he sees them begging. Ever more greedy, Peter kills his wife Lisbeth one day, because out of good nature she allowed the glass man, disguised as a weak old man, who was hard to carry and was freezing at the door, in and offered wine. Only at this moment does coalmunk Peter realize what has become of him. He remembers who he once was and how much he loved his Lisbeth.

Again he looks for the glass man in the fir thicket and hopes for his last, still open wish. The Schatzhauser refuses to give him this as long as he has the heart of stone, since he should have preferred understanding. With a trick, Peter gets his heart back from the Dutchman Michel: He claims in front of the giant that he still has his heart and that he has thus been betrayed by him. As proof, let the giant give him back his heart so he can feel the difference. Outraged by this accusation, the Dutch Michel agrees and Peter flees with his heart.

Now that Peter can feel again, his wife's death overwhelms him with pain and remorse. The glass man praises this good core in him and grants his last wish to undo everything. Peter is supposed to hit a tree with his ax and as soon as this has happened he will have his old clothes again. Shortly afterwards, Peter hears a familiar voice calling for him. When he looks around, he can see his Lisbeth from afar. Together they both walk hand in hand towards their future. 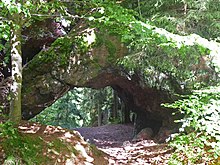 Location: the Schwarzatal in the Thuringian Forest

As early as the late 1940s, Munich director Paul Verhoeven was negotiating with DEFA about the dance film Melanie , a modern version of Cinderella , in which he wanted to show the rise of a young ballet student to a celebrated prima ballerina . Because of similarities to the movie The Red Shoes , the studio offered him, as a kind of replacement, The Cold Heart . Originally the film was supposed to be directed by Erich Engel .

Verhoeven shot The Cold Heart in the Babelsberg film studios in spring and summer 1950 . The outdoor shots took place in the Lauchagrund near Tabarz and in the vicinity of Schwarzburg (train station and pheasantry), especially for the distant views. A rotating staff of well over fifty people was involved in this film. At 3.2 million marks, the production costs were well above the planned expenditure. Due to the high production costs, which were mainly caused by elaborate trick scenes, DEFA ruled out any further collaboration with Verhoeven. The Cold Heart was the first GDR color film ( Agfacolor ) and the first DEFA fairy tale film to be staged with actors. It cost about 4,000,000 Ostmarks .

The premiere took place on December 8, 1950 at the same time in the Babylon cinema in Berlin and in the DEFA film theater Kastanienallee. Progress Film-Verleih took over the licenses and sales . The film is considered to be the trigger for the successful children's film production in the GDR . With 9,779,526 viewers, it also became one of the most successful DEFA films ever.

Differences from the book

The film adaptation sticks closely to Hauff's original, many differences are v. a. to be found in content omissions. The death of Barbara Munkin, whose first name is not mentioned in the film, is just as little shown as her resuscitation by the glass man. The story contained in the fairy tale about the origins of the Dutch Michel and his early work in the Black Forest is left out, as well as Peter Munk's travels, which he undertakes after exchanging his hearts, as well as the birth of his child at the end of the story and his attempt to to win the glass man as a godparent.

The most striking difference to the original book concerns Lisbeth. While Peter has known her for a long time in Verhoeven's work, which is also told in other film adaptations such as Fairy Tales in the Night and the adaptation from 2014 is depicted in this way, in the book he only goes looking for a bride after he has become rich. Lisbeth is the daughter of a widowed and impoverished woodcutter, in the film she is an orphan and grows up under the care of her uncle , who does not appear in Hauff's fairy tales.

In the book, the dance floor king and the tall Schlurker are two different people, here they are united in the figure of Hannes Schlurker , who at the beginning dances with Lisbeth and woos her.

Contemporary critics have criticized the film, which is actually based on a “wonderful theme filled with genuine humanism”. In the film, Verhoeven "let his own [...] confused imagination take control [...]". Peter’s encounter with the Dutchman Michel is said to be a “bloodthirsty torture chamber story”: “Boiling pools of blood are shown, hideous gurgling noises, brothel scenes 'inserted', the Dutch Michel is made into a figure from the cabinet of abnormalities. A sultry, bloodthirsty atmosphere obscures entire passages of the film, so that the good parts [...] that are also present are crushed by it ”. Nevertheless, the film is "masterful in color and photography". In retrospect, director Verhoeven also said that the film received mostly praise, but some critics said that “the cruel scenes are far beyond the capacity of children. As if the good and the bad had not always been an integral part of fairy tales! "

In its first review of the film, the film service of the Federal Republic of Germany found in 1951 that director Verhoeven unfortunately “cannot be spared the accusation that although the best young talent was available to him, he slipped into the declamatory, as in almost all of them his films […] On the whole as an attempt worthy of recognition and thanks. A few hearty cuts could perhaps tighten things up. ”In the 1985 review, the reviewer wrote that Verhoeven [had] implemented the fairy tale“ in the style of glossy pictures. Poetry and enchantment are displaced by sentimental Heimatfilm images . In the fairy tale forest with those fairy tale good and bad magic characters, some brilliant trick-technically brilliant and also very nicely played passages succeed, which can definitely compete with today's fairy tales à la Neverending Story . But the rest of the story seems extremely antiquated and also confused. ”The lexicon of international films , which usually takes over the reviews of the film service, judges more positively in its online version. It speaks of “successful tricks” and means that “the humanistic spirit of the original” is “preserved in every respect”. It thinks the film is "especially suitable for older children".

"Regardless of the tricks that seem out of date in terms of film technology and despite the cruelty, 'The Cold Heart' still wins the audience's favor over the years, primarily due to the poetic elements", so today's critics.

At the Karlovy Vary International Film Festival , The Cold Heart received the award for the best color film in 1951.