Oberrad has been a district of Frankfurt am Main since July 1, 1900 .

Oberrad is about 3 km southeast of the main guard on the southern bank of the Main . Historically, it is a closed, village-like settlement with a regular floor plan and a church in a central location. The modern expansion of the settlement is directed to the south.

In the north the district of Oberrad is bounded by the Main, on the opposite bank is the Frankfurt Osthafen in the Ostend district , in the northeast it borders on the Offenbach district of Kaiserlei , in the west on Sachsenhausen and in the south on the Frankfurt city forest , which is called Scheerwald here wearing.

An early Iron Age prince's grave, embedded in a burial mound over 36 meters in diameter and 3.5 meters high, was opened in 1966 in the Oberräder Eichlehen of the Frankfurt city forest during the construction of the motorway and then removed. A Celtic prince was buried there probably around 700 BC, and his sword, harness, drinking and eating utensils were found as grave goods. In the Archaeological Museum Frankfurt a special exhibition The Celtic Prince of Frankfurt shows a reconstruction of the burial chamber.

In Roman times a Roman road ran through the Oberräder district, the course of which followed Deutschherrenstrasse over Bernardstrasse to a presumed Roman bridge in Offenbach-Bürgel and also to Steinheim .

Since around 1100 the Dreieich Wildbann has been cleared. The oldest surviving mention of the place comes from 1151. However, it is unclear whether Ober- or Niederrad is meant here . The oldest reliable mention of the village of Oberrad comes from 1315, when Rode superior in the Reichsforst Dreieich, in royal possession, is mentioned. At that time, Oberrad belonged to the Bornheimerberg court and later office .

The oldest surviving mention of a church comes from 1270. It is dedicated to St. Margaret. In 1321 the church belonged to the parish of St. Bartholomew in Frankfurt, which also exercised the right of patronage . The central church authority was the archdeaconate of the provost of St. Bartholomew in Frankfurt. In 1304 the beguines Mechthild von Rode donated a hermitage , a small monastery, behind the cemetery in Rode.

In 1311, the Strahlberger Hof , later known as the Wasserhof , was mentioned. It passed to the Archbishopric of Mainz in 1601 and to the city of Frankfurt in 1803. With the Fleschenburg , the Johanniter in Oberrad had also been fortunate since 1293 .

In 1317 Oberrad was in the hand of Eberhard von Breuberg , bailiff of the Wetterau, as a pledge . After his death in 1330, King Ludwig IV transferred the village to his daughters, the wives of Count Rudolf von Wertheim and Gottfried von Eppstein . In 1331 the Lords of Hanau and Eppstein shared the rulership of the village. In 1425 the village and court of Oberrad came to the city of Frankfurt after they had redeemed the pledge. 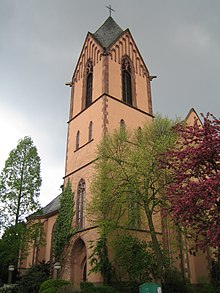 In 1530 the Reformation was introduced in Oberroden. During the siege of Frankfurt by Margrave Albrecht II Alcibiades of Brandenburg , Oberrad was destroyed in 1552.

After cattle breeding dominated in Oberrad for a long time, from the 16th century onwards the agricultural activities increasingly switched to growing grain, wine, fruit and, finally, especially vegetables. In the 18th and 19th centuries, Oberrad became a popular excursion destination and the summer residence of wealthy Frankfurters due to its rural character and good reputation for gastronomy . So met Johann Wolfgang von Goethe with Marianne von Willemer 1814 and 1815 at the Gerbermühle .

With the Frankfurt-Oberrad station of the Frankfurt-Offenbacher local railway , Oberrad received a rail connection as early as 1848. From 1873 the Frankfurt-Bebra Railway also used this station. In 1987 he was given up. Today there are demands for a stop on the Rhein-Main S-Bahn at this point.

The Frankfurt-Offenbach tramway company opened in 1884 one of the first electric tram - lines , as the distance from the Frankfurt Old Bridge in Sachsenhausen open until Buchrain place in Oberrad on 18 February and on 10 April of the same year to Mathildenplatz in Offenbach was extended. At the same time, the railway's own coal-fired power station was opened, which for the first time also enabled companies and private households in Oberrad to be supplied with electricity. The power station of the Frankfurt-Offenbacher Trambahn-Gesellschaft was on the network until the independent operation of the FOTG in 1906. This year, the island operation of FOTG was taken over by the Frankfurt tram and integrated into their network by converting the different system of power supply and re- gauging the route.

The Catholic Church of the Sacred Heart of Jesus was built from 1891 to 1893, the Protestant Church of the Redeemer from 1912 to 1914. As part of the New Frankfurt project , the Nonnenpfad settlement and the Tellersiedlung were built in 1929–1930 .

During World War II , Oberrad was 90% destroyed in bombing raids by the Royal Air Force in October 1943 and March 1944. In 1951 reconstruction began on a larger scale. Since the settlement area of ​​the place is not directly connected to the neighboring districts, despite the proximity to the inner cities of Frankfurt and Offenbach, the village character has been preserved to this day.

The residential area around Grazer Weg was created in the 1960s and 70s. Several high-rise residential buildings shape the immediate area. In 2003 the city planning office tried to improve the character of the district with a modern densification.

The Philosophical-Theological University of Sankt Georgen has been located on the border with Frankfurt-Oberrad in the Sachsenhausen area since 1926 . By 1956, the Erlöserkirche, which was destroyed in the war, was rebuilt in a modern form by the architect Alfred Schild .

In 2007 the voluntarily run Heimatmuseum Oberrad opened on Wiener Straße.

Line 16 of the Frankfurt tram in Offenbacher Landstrasse

In earlier times it was as follows:

Horticultural areas and greenhouses in Oberrad, in the background the skyscrapers of Wiener Straße

The northern part of Oberrad between the town center and the Main is characterized by extensive fields of horticultural and horticultural businesses and the district therefore got its reputation as a “gardener's village”. A total of twelve horticultural companies cultivate an area of ​​around 130 hectares in Oberrad, almost half of the total area of ​​the district. In addition to the herbs for the Frankfurt Green Sauce , lamb's lettuce and rocket are mainly grown. Since May 21, 2007 there is a green sauce monument in Oberrad . It consists of seven greenhouses in different shades of green, each of which represents one of the ingredients.

In contrast, there are few industrial establishments and no major shopping centers, but smaller retail establishments and extensive residential areas. The membership register of the Oberrad trade association contains more than 300 companies . Most of the shops are on Offenbacher Landstrasse, whose central location also encourages people passing through to shop here.

Today, tram lines 15 and 16 run through the district and end at the Offenbach city limits stop . Since the 2010/11 timetable change, bus routes 81 and 82 have been running through Oberrad.

The following sports clubs can be found in Oberrad: