Kaiserlei is a district of the southern Hessian city Offenbach am Main . The quarter is characterized by its predominantly commercial use and is the most important office location in the city.

Around 870 people lived in this district in June 2020. Kaiserlei is thus the district of Offenbach with the smallest number of inhabitants.

The Offenbach-Kaiserlei motorway junction leads to the busy Strahlberger Kreisel (generally called Kaiserlei-Kreisel in Offenbach ), and Offenbach city center can be reached in a few minutes via Berliner Straße . The Kaiserlei station of the Offenbacher City-Tunnel is located directly at this roundabout and thus offers easy access to the quarter.

In any case, Kaiserlei has been a traditional border area since the early Middle Ages . The so-called border ditch runs here . The moat forms a territorial border that is more than 1000 years old. In the Carolingian period he separated the Main Gau from the Rhenish Gau , later the Free Imperial City of Frankfurt from the County of Isenburg , and finally Prussia from Hesse . Today this is the city boundary between Frankfurt and Offenbach.

In 2004 Offenbach am Main and Frankfurt am Main reached an agreement on the joint development of areas of both municipalities, which border one another here, and thus made it possible to expand the commercially usable area. The revised master plan for the Kaiserlei area comprises three sub-areas. Of these, the commercial quarters Am Grenzgraben and Kaiserlei-Promenade are on the Frankfurt district and cover 23  hectares . The newly emerging urban space Neuer Kaiserlei (also: Kaiserlei Mitte ), bounded by the B 43 , the A 661 and the Frankfurt – Offenbach railway line, enables one of the most important expansions of Offenbach's office space on 20 hectares. The car company Hyundai, among others, has its European headquarters in this area . Further development of the area is planned.

The name comes from a large rock , the so-called Kaiserlei , which pushed itself from the Frankfurt bank into the river bed of the Main near today's Kaiserleibrücke . At the time of Frankish owned name of the area near Offenbach in the 6th century was this Main section only a tributary of the river , which as a fishing area was used and in time sequence, the Won name on the Great Emperor Specialists wore, probably because after Frankish right roads and rivers to the emperor were assigned. Subject was given the meaning of section . The lei (also Ley or Lay ) is a Celtic expression for rock or stone (see also Loreley and Ley ), therefore Kaiserlei means something like Kaiserfelsen .

In 1852 the rock was blown up to widen the fairway for ships on the Main. In 1873 large parts of the rock slab were dredged out of the river. With the canalization of the Main upstream via Frankfurt to Offenbach, the fairway was widened in 1901 to its current dimensions.

View of Kaiserleistraße in a westerly direction. On the left the former building of the German Meteorological Service , on the right an Areva GmbH building

View of the Omega house

In its development, Kaiserlei is primarily characterized by the settled finance and service companies. The appearance is determined by functional office and commercial buildings in the style of the 1970s and 1980s. At the beginning of the 21st century, buildings based on the postmodern style are increasingly being built . Examples are the Omega House and the Alpha House . Existing plans provide for a similar development for the Neuer Kaiserlei area.

There are hardly any residential buildings in this district. The number of apartments was 1,060 in June 2014. New apartments can no longer be built in Kaiserlei due to settlement restrictions.

In line with the use of the quarter, Kaiserlei can boast three buildings within the top ten of the ten tallest buildings in Offenbach (as of December 2015): In addition to the two former Siemens buildings on Berliner Straße with 75 meters and 60 meters, the former Golden Tulip counts Hotel with 66 meters also to this.

The Kaiserleibrücke and the Offenbach barrage should be highlighted as special buildings in Kaiserlei, both of which are considered industrial monuments.

Kaiserlei is particularly affected by aircraft noise . Offenbach as a whole is considered to be the municipality with the highest daily exposure to aircraft movements around Frankfurt Airport . As a result, the quarter is subject to the law on protection against aircraft noise , which results in settlement restrictions. Hospitals, old people's homes and rest homes, as well as schools, kindergartens and similar institutions that require the same degree of protection, are not allowed to be built in Kaiserlei. The same applies to the identification of new residential areas that have not previously been marked as construction areas.

Because of a large number of transport options, Kaiserlei is considered to be conveniently located. In particular, the connection to the autobahn with quick access to the Frankfurter Kreuz and Frankfurt am Main Airport (which can also be reached by S-Bahn within 20 minutes) is seen as a locational advantage.

Kaiserlei is crossed in a north-south direction by the federal motorway 661 , which leads south over the Kaiserleibrücke , which opened on December 18, 1964 , and is connected to the highway network via the Offenbach-Kaiserlei motorway junction. Furthermore, the federal highway 43 runs through the neighborhood in an east-west direction.

The underpass of the federal highway 661 by the federal highway 43 as well as the highway connection take place via the Strahlberger Kreisel . The performance of the gyroscope has reached its limits. Around 65,000 cars pass the roundabout every day (as of September 2013). An increase to 79,000 vehicles is forecast by 2020 - partly due to the traffic connection of the new building of the European Central Bank . The reconstruction of the roundabout should take place during ongoing operations. It was originally planned to start in 2014, which was then postponed to 2016. Construction work began in February 2017 and should be completed by 2020. Due to contaminated sites in the ground, completion is not expected before autumn 2021. 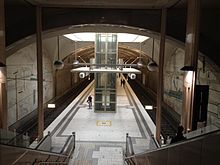 Departure to the Offenbach-Kaiserlei S-Bahn station

The underground double-track S-Bahn station Offenbach-Kaiserlei is located in Kaiserlei . All lines that serve the eastern area of ​​the Rhein-Main S-Bahn ( S1, S2, S8 and S9 ) operate here . The stop is in the Offenbach City Tunnel . Since the station is on the tariff border between Frankfurt and Offenbach, it is mainly used by commuters who start or end their journey here.

Kaiserlei is by city bus lines of Offenbacher transporting enterprises (in short: OVB) GmbH developed and operated by the OVB-lines 102, 103, 104, 107 and 120 as well as from the Frankfurt night bus n61. Since December 15, 2013, another line (108) has been put into operation by the OVB. Since Easter 2009, the Kaiserlei station has also been the start and destination station of the Frankfurt Museum Bank Line 46 on summer weekends.

In cooperation between the local transport in Offenbach am Main (short: NiO) and the city of Offenbach, a bicycle rental system with initially 50 bikes was installed in March 2008 . The operator of the public bike rental system was Nextbike . Since summer 2016, Deutsche Bahn Connect has operated the service under the name “ Call a Bike ” with a total of 78 rental bikes.

The rental stations in Kaiserlei are at the S-Bahn station.

Several cycle paths run along the banks of the Main in Kaiserlei :

The regional loop city and district Offenbach of the Hessian apple wine and orchard route under the motto restaurants, wine presses and weekly market also leads through Kaiserlei. 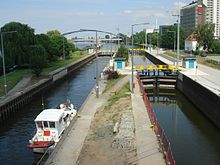 Offenbach lock with a view of Kaiserlei

Kaiserlei borders the Main on its north side. This is connected to the industrial regions in North Rhine-Westphalia , the Netherlands and the Upper Rhine via the Rhine and to south-eastern Central Europe via the Main-Danube Canal , which is why there is brisk ship traffic here.

The Offenbach barrage at kilometer 38.51 of the Main is a barrage with a lock. It is located in Kaiserlei on the city limits of Frankfurt.

Many companies have their headquarters or a branch in Kaiserlei. The following are mentioned as examples:

The German Weather Service was also based here until the new building was erected. 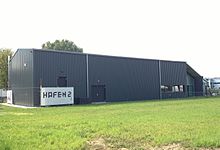 Port 2 in the new construction phase 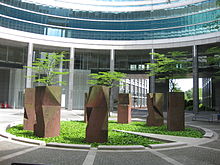 Sculpture group in the atrium of the Omega House

The Robert Johnson Club is located in Kaiserlei and is one of the hippest house and techno clubs in Europe and is said to be the coolest club in Germany .

A wide range of concerts, film screenings, readings and exhibitions can be found regularly in the Hafen 2 cultural center. In summer, many of the events take place in the outdoor area directly on the Main.

There are two works of art in public space in the district :

The atrium of the Omega House is adorned with a group of sculptures made from Michelnau tuff by an unknown artist.

In Kaiserlei regularly find graffiti - events instead of the project Living Walls.

In 2007 the first Offenbacher Laufhaus opened here, which has since been closed again .

The Finnish musician and DJ Klas Lindblad released a piece under his stage name Sasse under the name Kaiserlei kreuzt .

Districts of Offenbach am Main