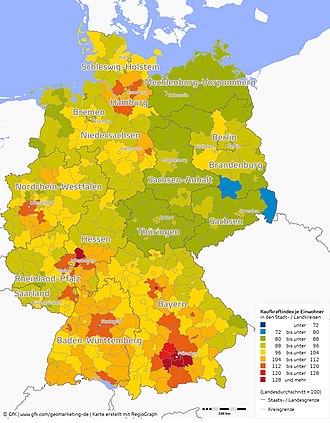 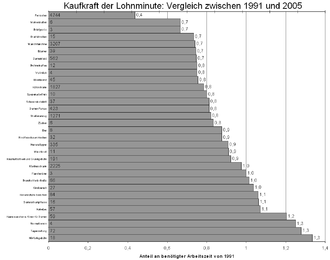 Relationship to standard of living : Development of the purchasing power of the minute wage in Germany from 1991 to 2005

As purchasing power of consumer households that in is private households for consumption purposes available income referred to, so the amount that each household remains on income after all periodic payment obligations (such as rents , mortgage payments , insurance premiums ) were served. Purchasing power can therefore refer to either the monthly income or the annual income of a person or household.

The purchasing power of a household is not only linked to the employment situation of the household members, but is also subject to clear regional differences. These differences are of great importance for the consumer goods industry , which has to adapt its supply to the purchasing power in a particular region in order not to bypass the needs of the market.

The purchasing power theory is an approach in economic theory about how wage increases impact.

The disposable income of private households is a particularly meaningful indicator of the (monetary) “prosperity” of the population and is to be understood as the amount that is available to people living in a certain region for consumption purposes or for the formation of savings. The disposable income results from the received primary income after deducting the current transfers made and after adding the received current transfers. However, disposable income should not be equated across the board with the term “purchasing power”, since purchasing power should in principle also take into account the price level in addition to the nominal amount of money ( real wages ), while the disposable income as a pure nominal amount of money does not take into account any price differences.

The calculation of the purchasing power index is essentially based on wage and income statistics, i.e. on data from the tax offices and on data in connection with state transfer payments (unemployment and child benefit payments, family allowances, pensions, etc.). All income from self-employed and employed work, income from renting and leasing, interest and capital income are recorded. On the deductible side, taxes, compulsory insurance, savings and loan repayments are taken into account.