In everyday language , need is understood to mean desire , desire , demands (“growing needs”) or something mostly material that is necessary for life. In psychology, need is often defined as “a state or experience of a deficiency, combined with the desire to remedy it” or as the desire or desire to remedy a perceived or actual deficiency . This general psychological term, to which the terms motive and motivation are related, is the point of reference of the presentation and is related to economic, philosophical or other uses of the term.

The term “need” can be used in psychology for two different situations: for a time-stable disposition on the one hand and for the current state of excitement of an organism on the other. In relation to a current state of excitement, dispositions are potentialities that are activated when certain conditional events occur (trigger factors). With regard to humans, such a disposition can be described as a personality trait . As a current state of arousal, the need turns out to be a preliminary stage of the desire. Desire is a state of arousal that directs the human psyche towards specific target states. According to the so-called incentive theories, this directionality takes the form of the expectation of something that represents an incentive value for the individual. Incentive is the anticipated emotion with regard to the target state, the incentive value is the degree of positive emotion associated with the targeted target state. In this case, the need is, so to speak, a state of excitement preceding the desire, even before an external stimulus leads to the formation of a concrete goal.

The two uses of the term “need” can be distinguished by distinguishing between a dispositional and a stimulated need. Due to the double meaning of the expression “need”, the terms “motive” (for the personality trait) and “ motivation ” (for the current state of arousal), which are primarily used by empirical psychology, are suitable.

According to the type of satisfaction

Since the means available to humans are often limited, they cannot always satisfy all basic, cultural and luxury needs at the same time. He must therefore make a choice or prioritize his needs. That is why the luxury and cultural needs are also summarized under the term electoral needs .

According to another terminology, basic needs needs whose satisfaction are considered vital in a society to allow a social subsistence level (example: self - Garden ). Needs to choose are particularly evident in goods of higher quality (example: villa with courtyard, barn and fields ). What is a basic need and what is just a need to choose is often valued at will, apart from the consideration of the equality , balance and basic rights (e.g. equal treatment in relation to maintaining health). 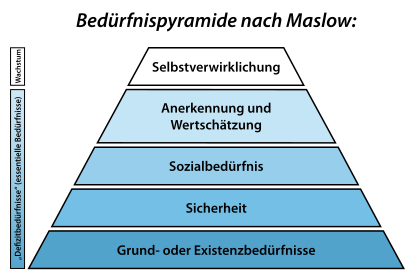 A differentiated consideration takes place with Maslow's hierarchy of needs . It is based on a model developed by the American psychologist Abraham Maslow to describe motivations of people and belongs to the cognitive motivation theories. Here the motives are seen as driving forces of human behavior. The human needs form the "levels" of the pyramid and build on one another according to this theory. Accordingly, a need is always behavior-determining until it is completely satisfied. Only then does the next higher need gain importance and determine behavior.

Complementary needs are needs that are only evoked when a need is satisfied. For example, the need for a larger apartment means that there is a need for new furnishings such as furniture and carpets.

Since it has set itself the target that gross domestic product to increase permanent, be strategic psychological manipulation (including through.. Advertising - campaigns ), needs (additional needs) aroused or generated that serve the interests of the industry (and those financiers) to more sales. So one can speak of “real” and “false” needs in this context. The company tries to make it credible that there is a need for it or that a new need has arisen.

According to concreteness and subject

Material needs are aimed at material objects, such as B. the desire for bread, a color TV or a smartphone.

Immaterial needs, on the other hand, are satisfied in the religious, ethical or spiritual area, such as B. the desire for social prestige, power, justice, security or a visit to the theater.

Needs that are specifically felt by us, such as the desire for praise or food, are referred to as conscious or open needs. Others, which are felt subliminally, can be assigned to latent or hidden needs. They slumber in secret and can become open needs when they are awakened. This is very often done through advertising (creation of needs).

Need in the Humanistic Tradition

Marshall B. Rosenberg , a student of the humanist Carl Rogers , developed the model of non-violent communication out of the need to find an applicable method for conflict resolution . This model gave rise to a concept of need that can be used in addition to definitions from motivational psychology.

Needs in Rosenberg's sense are common to all people. Needs are therefore independent of times (epochs), places (regions, cultures) and people. The needs of different individuals are never opposed to one another, only the strategies used to meet the needs. Needs are general; Wishes differ from needs in that they already represent a level of concretization towards strategies. If you want to get a deeper insight into the causes of the problem or conflict, needs must be clearly separated from strategies.

According to the self-determination theory (SDT ) founded by Deci and Ryan (2000, 2008), three universal basic psychological needs have emerged in the course of human evolution, which ensure an optimal adaptation of the individual to his or her physical and social environment. On the one hand, there is the need for competence, which is expressed, for example, in the joy of learning, then the need for social integration, which also includes the desire to have a meaning for others, and finally the need for autonomy, which is understood here is seen as the tendency, deeply rooted in the organism, to self-regulate one's own actions and the coherence of one's behavioral goals. The need for autonomy should not be confused with a need for independence from other people or from certain situations.

According to the theory of self-determination, the three mentioned basic psychological needs differ in principle from physiological needs, which as a rule lead to behavior aimed at calming a state of arousal caused by a deficiency. In contrast, the basic psychological needs of any behavior affect both the type and strength of motivation and the development of related behavioral goals or motives. The better these basic needs can be satisfied with the behavior at the same time, the higher the quality of this behavior in terms of creativity, problem-solving behavior and perseverance, the more the behavior is connected with well-being and the more successful the associated internalization processes are. In this respect, the self-determination theory is differentiated from the classic needs theories (SDT) in essential points within psychology .

In economics, need is the feeling of a deficiency with the aim of eliminating it.

The chain links lack, need, need and demand are often used synonymously, but must be differentiated from one another in economic terms. An objective deficiency occurs in all economic subjects ( private households , companies or the state with its subdivisions) and becomes a need when it is subjectively perceived by economic subjects and there is an incentive to satisfy needs. It does not depend on the objective deficiency, but on the subjectively felt deficiency. A need becomes a need when it is confronted with specific goods or services that can serve to remedy this deficiency. The subjective (pre-economic) need is substantiated by the economically relevant need. Demand is the type and / or quantity of goods and services necessary to satisfy an economic entity's needs. When the need leads to a purchase decision, we speak of demand.

All people - regardless of the prevailing economic and social order - have unlimited needs or feelings of deficiency and the aim is to eliminate these deficiencies. Needs arise depending on time and space . The need is an abstract perception of deficiency that depends on the framework conditions and has a natural origin (e.g. hunger ), is socially justified ( road construction ) or consists of a mixture of both. Physiological needs are material or immaterial, such as food , clothing , housing , health care , leisure or security . Psychological needs include friendship , social relationships, and recognition .

Theory of limited and universal basic needs according to Max-Neef

The economist Manfred Max-Neef sees needs not only as a lack, but also as individual and collective human potential.

Concept of the interaction of fixed basic needs

In contrast to the traditional view that human needs are unlimited, are subject to constant change and change from one culture to another and are different in every historical development phase, Max-Neef assumes that basic human needs are limited, numerically small and different classifiable - because they are socially universal (independent of person, place, culture, historical epoch). They would correlate and interact with one another.

He proposes the following nine axiological value categories for a taxonomy of basic human needs :

Max-Neef suspects that the basic needs arose in time with the evolution of humans (so “identity” and “freedom” are presumably younger than the rest, while a tenth, transcendence , will perhaps only be so universal in the future).

Dynamics and context of basic needs

According to Max-Neef, the satisfaction of needs is a dynamic process, characterized by simultaneity, complementarity and compensation ( trade-off ), and takes place on different levels and with different intensity as well as in a three-fold context:

Max-Neef believes it is essential to distinguish needs from satisfaction .