The title of this article is ambiguous. For steamed rice, see pilaf .

Risotto with fennel and lemon

Grilled shrimp on risotto with lemon and chives

The risotto ( [riˈzɔtto] ( listen ? / I ) or southern Italian [riˈsɔtto] ) ( listen ? / I ) is a northern Italian porridge dish made from rice that is prepared in different variations. It is characteristic of almost all types of preparation that medium-grain rice and onions are steamed in fat and cook in broth until the dish is creamy, but the rice grains are still firm to the bite . Depending on the recipe, wine , mushrooms , seafood , meat, vegetables, less often fruit (strawberries, apples, blueberries), spices and cheese (mostly Parmesan ) are added.

Rice has been known in Italy since the Renaissance and is mainly grown in the Po Valley . The best known varieties suitable for risotto are Arborio , Vialone and Carnaroli . Broken rice, which is often sold as rice pudding, is unsuitable because it does not get the desired consistency during preparation. Regardless of the quality, long grain rice is also unsuitable for risotto, as it does not release enough of the starch responsible for its creamy consistency when cooked to the bite .

In Italian cuisine , risotto is the first main course ( primo piatto ) or as an accompaniment to a stew such as B. Risotto alla milanese served with osso buco.

For preparation, chopped onions are steamed translucent in fat, dry rice is added and a little sweat. Then it is extinguished with hot meat or poultry broth, often with wine at the beginning. During the cooking time, boiling hot liquid must be added and stirred again and again. The finished risotto should be more or less soupy depending on the recipe, the rice should be creamy on the outside and firm to the bite on the inside. Finally, a little butter and, in most recipes, grated Parmesan is added.

Risotto bianco (white risotto as a side dish) is prepared according to the basic recipe. A little fresh sage is added to the onions, which is deglazed with a glass of white wine. The risotto is completed with butter and parmesan.

Risotto alla milanese (saffron rice, Milanese style) is colored with saffron threads , and beef bone marrow is used to sweat the onions with a little butter, which, together with the saffron, gives the dish its typical flavor. Other ingredients are butter and parmesan at the end. Opinions are divided as to whether wine should be used. If so, the traditional method is to deglaze the steamed rice with a glass of red wine (including white wine in modern recipes) before adding the broth. The best broth is the one that comes from the preparation of bollito misto , a sumptuous boiled meat made from chicken, beef and veal.

Risotto agli asparagi (risotto with asparagus) is prepared with (mostly green) asparagus . The asparagus tips are cut off. The chopped sticks are cooked in salted water and the cooking stock is used instead of broth for the risotto. The asparagus heads are steamed separately in a little butter. At the end of the preparation, they are added to the risotto together with the asparagus pieces after the butter and the parmesan.

Risotto nero (black risotto) is made with small squids . He gets the color from their ink bags. The cleaned squids are cut into strips with onions, garlic and parsley , steamed in olive oil, deglazed with white wine and cooked. Then the rice and the ink are added. The rest of the preparation takes place according to the basic recipe. Fish stock is used as the liquid . Instead of butter and cheese, just add plenty of black pepper at the end . As a side dish, risotto nero can also be prepared with just ink - without squids. Ink is available packaged in some fish shops. 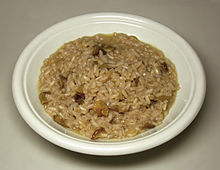 Risotto ai funghi (risotto with mushrooms) is prepared like risotto bianco. Instead of sage, cut porcini mushrooms or other edible mushrooms are steamed with the onions and deglazed with white wine. Soaked dried mushrooms can also be used.

Risi e bisi (rice with peas; also known as Risibisi or Risi-Pisi ) is a classic of Venetian cuisine, which was served as the first course to the Doge of Venice every year on St. Mark's Day . For preparation, bacon , onions and parsley are sautéed in a mixture of olive oil and butter, the young peas and a little strong meat broth (possibly with meat extract) are added and everything is steamed for a short time. Then it is topped up with boiling meat broth, the rice is added and cooked. After seasoning with salt, pepper and sugar, butter and parmesan are mixed in. Very young peas can be used with the pods.