This article describes the federal highway 72 in Germany. For the street of the same name in Austria see Weizer Straße .

The federal highway 72 (abbreviation: B 72 ) - in the vernacular of the region also known as the "Ostfriesen-Highway" - is a German federal highway . It runs through Lower Saxony from the North Sea coast near Norddeich to Emstek to the Cloppenburg junction of federal motorway 1 .

The federal road 72 begins as a normal country road directly in the Norddeich harbor on the access ramps of the island ferries to Norderney next to the long-distance platform Norddeich Mole of the Deutsche Bahn. Coming from this flooded area of ​​the North Sea, it first overcomes its dike. Immediately behind it a descent leads to the island parking lot. Then it bypasses the city of Norden and a little later Marienhafe without any cultivation . From Georgsheil to Aurich it runs on a common route with the federal road 210 , as well as between Bagband and Hesel with the federal road 436 . In these areas it is run as a normal country road with through-roads. Nevertheless, the former section is the one with the highest traffic load on the federal highway.

Junction Filsum of the federal highway 28

From the Filsum junction of the A 28 , it functions for the first time as a motor road in the 2 + 1 system , in which the directions of travel have two lanes alternating for approx. 1.5 km, while the other direction is only a single lane. From Friesoythe to Varrelbusch it runs as a normal country road, from there until shortly before the entrance to the European route 233 again in the 2 + 1 system . On the Europastraße, it bypasses Cloppenburg as a motor road and a four-lane yellow motorway and then switches to the 2 + 1 system again until it ends at the Cloppenburg junction of federal motorway 1 in Emstek .

Unlike today, there were no bypass roads on the B 72 until 1968, so that the federal road had through-roads through Emstek, Cloppenburg, Friesoythe , the villages of the Saterland as well as Potshausen , Stickhausen and Filsum . Originally the B 72 ended in Georgsheil , as today's section of the B 72 to Norddeich was assigned to the Bundesstraße 70 .

In 1968 the first bypass road was completed in the course of the federal highway 72, namely the Friesoyther bypass. The route bypassing the Emstek between the federal autobahn 1 and Cloppenburg-Bethen initially had (like all bypass roads in the course of the B 72 in their early years) only one lane in each direction, but the maximum speed limit was increased to 120 km / h, which is right in Germany was rare. However, since there were serious accidents, particularly in the area of ​​the long curve between Emstek-Ost and Emstek-West, this was soon revoked and a ban on overtaking was even issued. The section between Emstek and Cloppenburg was rebuilt from summer 2006 to spring 2007.

The plan published in 1972 to extend Bundesstraße 72 beyond Schneiderkrug to Sulingen was abandoned in 1976 , mainly because of the associated route (large areas of bog would have been cut through).

Until July 7, 2009, the federal highway 72 ran through the inner city of Norden and its Norddeich district, which it now bypasses on a route free of cultivation.

Since November 2011, the traffic management between Varrelbusch has been extended to the 2 + 1 system until shortly before the slip road to Europastraße 233 .

Changes in the Aurich and Südbrookmerland area 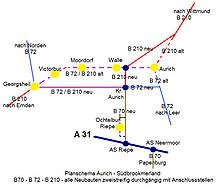 In this section, the B 72 runs on the same route as the B 210 . The current Federal Transport Infrastructure Plan approved by the Federal Cabinet provides for the following changes:

The 2 + 1 system is planned for the section from the A 31 to the entrance to the Enercon plant on the B 210 in northern Aurich . The connections to the existing road network are largely made with motorway-like junctions. The overall project is being re-run at the Lower Saxony State Authority for Road Construction and Transport under the working title of Bundesstraße 210 .

In this section, some sections are currently in the 2 + 1 system . In the long term, this should be done continuously up to Europastraße 233 . Bridge widening work is in progress. The subsequent European road is to become a four-lane yellow motorway through to the A1 .