This article describes the Bundesstraße 122 in Germany. For the street of the same name in Austria see Voralpen Straße .

The former trunk road 122 (FVS 122), renamed Reichsstrasse 122 in 1934, ran from Cottbus via Glogau to the then Polish border near Fraustadt . Since 1945, most of the road has been on Polish territory. 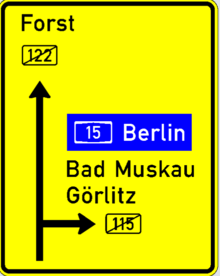