This article describes the Bundesstraße 227 in Germany. For the street of the same name in Austria see Donaukanal Straße .

The federal road 227 (abbreviation: B 227 ) is an originally 41 kilometer long federal road in North Rhine-Westphalia ( Germany ) and connects the large Ruhr area cities Essen and Mülheim with the smaller cities of Ratingen , Heiligenhaus and Velbert south of the Ruhr .

The B 227 begins on the A 52 at the Breitscheid junction in the city of Ratingen and forms the continuation of the B 1 , which, coming from Mülheim, leads over the A 52 to Düsseldorf , while the B 227 after a few kilometers at the Krummenweg roundabout in turns east. Via Ratingen-Hösel and Heiligenhaus, it leads to the Heiligenhaus-Hetterscheid junction on the A44 , which it replaces past Velbert to the Essen-Heisingen junction . 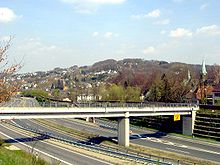 From there, the B 227 continues as a four-lane city street in the direction of Essen city center ( Wuppertaler Straße and Ruhrallee ).

Shared use by trams

At the Emscher crossing between Gelsenkirchen-Bismarck and Erle (between the Zoobahnhof and the intersection with the B 226 at the Forsthaus Erle ), the tram line 301 of the Bogestra uses the B 227 on a special track in the middle.

The section from Breitscheid to Velbert of today's B 227 has its origins in the Hilinciweg .

The section between the A 40 and the confluence with the B 226 in Gelsenkirchen was not upgraded to a federal road until January 1, 1967.

The section between the A 40 and Gelsenkirchen city center is part of the rejected planning for the A 41 , the north-south Gelsenkirchen motorway .

After the construction of the bypass through Essen-Kupferdreh as an elevated road and the subsequent Ruhr bridge ( Theodor-Heuss-Brücke , completed in 1968) and the completion of the A 52 , the route of the B 227 in Essen became the Wuppertaler Str./Ruhrallee to the Essen junction -Bergerhausen moved, and thus, in addition to Kupferdreh, also relieved the through traffic of Essen-Steele . The B 227 ended in Essen-Kray at the B 1 .

After completion of the new section from Essen-Dilldorf to AS Langenberg, the old route of the B 227 between Dilldorf and AS Heiligenhaus-Hetterscheid (through Velbert) of the A 44 was downgraded to a state or district road.

The 3.7 kilometer long new section between Essen-Dilldorf and Velbert - Langenberg , which connects the Essen-Kupferdreh bypass with the A 44 , was last designated as the B 227n during the planning and construction phase .

This section replaces the old, narrow, winding and therefore very accident-prone route of the B 227 over Rodberger Straße.

The new section was opened after seven years of construction on December 5, 2005 and dedicated as Bundesstraße 227. According to the State Office for Road Construction NRW, 32.6 million euros were invested in the new building.

This new section and the subsequent bypass from Essen-Kupferdreh to the Essen-Heisingen junction are built like a motorway, with four lanes throughout plus hard shoulder and a speed limit of 80 or 100 km / h. Therefore, this section was rededicated to the federal motorway on January 1, 2010 and added to the A 44 .