Gerbrunn is a municipality in the Lower Franconian district of Würzburg .

The capital Gerbrunn is located on the eastern outskirts of Würzburg , about four kilometers from the city center.

Besides Würzburg in the west, the neighboring communities are Rottendorf in the northeast, Theilheim in the southeast and Randersacker in the south.

There are two parts of the municipality, Gerbrunn and Gieshügel .

The place name is derived from the composition of ahd. Gêr ( Ger, Speer, javelin, Keil, among others ), probably as part of a personal name as Gerwin (see,.. B. Gerabronn ), and ahd. Brunne (source) to the source ( "Gerwin's source", ahd. Geruuinesbrunnon ?), Where a fountain is still in operation in the old town near the town hall. 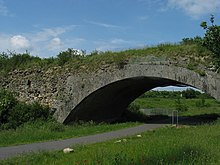 Gerbrunn was first mentioned in a document in 1107. As part of the high pin Würzburg , which the Franconian Circle belonged Gerbrunn was 1,803 in favor of Bavaria secularized , then in the Peace of Pressburg (1805) Archduke Ferdinand of Tuscany to form the Grand Duchy of Wurzburg left with which it finally at 1814 Bavaria fell back. In the course of the administrative reforms in Bavaria, today's municipality was created with the municipal edict of 1818 .

To the north of Gerbrunn is the Roman Bridge , which was built in the 18th century under Prince-Bishop Adam Friedrich von Seinsheim , but was abandoned after only one year due to its disrepair. It should have improved the road connection Frankfurt - Nuremberg - Vienna.

At Schoorl in the Dutch village of Bergen (North Holland) friendly relations.

Development work on the Innerer Kirschberg III building area began in May 2016.

In 2011, according to official statistics, there were 305 in the manufacturing sector and 247 in the trade and transport sector at the place of work. In other economic sectors, 194 people were employed at the place of work subject to social security contributions. There were 2159 employees at the place of residence subject to social security contributions. There was one in manufacturing and four in construction. In addition, there were six farms in 2010 with a total of 107 ha of agricultural land, 93 ha of which were arable land.

The soccer team of TSV Gerbrunn qualified as a Bayern cup finalist for the DFB Cup in the 2003/04 season . Against the second division side Wacker Burghausen , the ninth division lost its first round game 0:14 - just as much as the Bayern Cup final against the upper division TSV Aindling shortly before .

Municipalities in the district of Würzburg