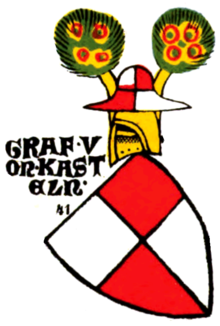 The Castell are a Franconian aristocratic family and ruled the Grafschaft Castell , an empire-class county in the Franconian Empire , from 1202 to 1806 . As former counts and later titular Bavarian princes who ruled directly in the Holy Roman Empire, they belong to the high nobility . The two main lines still own the family estates of the former sub-counties of Castell and Rüdenhausen in Lower Franconia.

Castle stable on the Casteller Schlossberg with stair tower from 1615, remainder of the Castell'schen ancestral castle

It was documented as early as March 3, 1057 with "Rubbrath (Rupert) de Castel" e in Castell and was called from 1091 after the ancestral seat "de Castello". In 1202/5 the sex was raised to the rank of imperial count . It had the right of escort on the road from Kitzingen to Bubeneiche (in the direction of Neustadt an der Aisch ) and on the entire road from Würzburg to Bamberg .

Since 1168, the Counts of Castell were inheritance gifts in the Würzburg Monastery . Since the Prince Bishop of Wurzburg in his great titulature also "later Duke in Franconia " called, was in the Baroque butler title extended the respective head of the Count of Castell to "the Bishopric of Würzburg and the Duchy to Franconia Upper-Erbschenk".

In the course of the 12th century, the noble family succeeded in establishing their own service aristocracy, which consisted of several ministerial families in the county. The oldest of these families is the von Wiesenbronn family , based in the village of the same name.

Burghaslach (Haselach Castle) was founded by Gottfried III. von Hohenlohe , Bishop of Würzburg from 1314 to 1322, given as a fief to the Counts of Castell. In 1398 King Wenzel granted Count Wilhelm I the right to mint and the counts established the Castell'sche Mint in Volkach . In 1457, due to economic problems of Wilhelm II. , The Grafschaft Castell became an afterfief of the Hochstift Würzburg , but was subsequently able to maintain its imperial status.

In the years 1546 to 1559, the Castell introduced the Reformation in the county. After the division of the county in 1546, Count Georg II. (1527–1597) temporarily included the old castle in Rüdenhausen and in 1556 chose the moated castle Rüdenhausen as the permanent residence and seat of government. This established the line of Count Castell-Rüdenhausen. Count Konrad stayed in Castell, Heinrich IV. (1525–1595) took over the maternal inheritance (parts of the county of Wertheim ) and built a new castle in Remlingen .

Since neither Konrad nor Heinrich had male descendants, the county was divided again in 1597 between the sons of Georg II: Wolfgang II (Castell-Remlingen) and Gottfried (Castell-Rüdenhausen).

In 1783 the moated castle Breitenlohe was acquired, which remained in the family until 1942.

After the Napoleonic Wars , the Grafschaft Castell was mediatized in 1806 and incorporated into the Kingdom of Bavaria . The previous rulers were appointed hereditary " Reichsrat der Bavarian Krone " and took part in the legislation until 1918 (end of the Kingdom of Bavaria). In 1901 the Castell-Castell and the Castell-Rüdenhausen were raised to the hereditary Bavarian prince status on the occasion of the 80th birthday of the Prince Regent, the respective head of the family of the two lines has since then been given the title of prince.

With Article 109 WRV ( Weimar Constitution of 11 August 1919) was established that the public privileges or disadvantages of birth or of the state should be repealed. The former nobility designations were abolished as titles and have only been part of the family name since then. In the monarchy common firstborn titles such as prince or successor titles such as hereditary count are not part of the name. Since the abolition of the monarchy, the regular and civil family name here has been Count or Countess zu Castell-Castell or Count or Countess zu Castell-Rüdenhausen. Nevertheless, following the lines of tradition, the respective bosses refer to themselves as Fürst zu Castell-Castell or Fürst zu Castell-Rüdenhausen and the eldest sons as hereditary counts. The salutations " Highness" or " Noble" are still used by some circles in society as a form of politeness, but have been without legal relevance since the abolition of the monarchy.

During the reign of the National Socialists in the 1930s and 1940s, the Fürstlich Castell'sche Bank , which had existed since 1774, integrated itself into the new political and economic system. Today, according to the bank's own statements, the bank's behavior towards its Jewish customers is not classified as aggressive, but it was also not characterized by any particular sympathy for the grave fate of its Jewish fellow citizens. The family's political stance was very inclined towards the National Socialists and can be described as loyal to the system and its values. Carl Fürst zu Castell-Castell joined the NSDAP in May 1933 and rose to the position of cavalry leader of the SA group in Franconia in 1935 . The sons Albrecht and Philipp joined the young people and took part in events organized by the Hitler Youth . According to his own statements, Albrecht admired the perfection and aggression of Hitler's state apparatus and foreign policy well into the Second World War. The attitude of the father Carl Fürst zu Castell-Castell towards Jews was negative. When he was drafted as a reserve officer in 1939, his two sons Albrecht and Philipp did the same and also went to war. Albrecht returned from the war in 1945; his brother and father fell. Almost 50 years after the war, Albrecht von Castell-Castell sought reconciliation and opened the bank's historical archives. In this way he made it possible to clarify the fate of 163 of his Jewish customers. Only a few survived in Germany.

Nowadays, besides the range of wines, the house of Castell-Castell is also increasingly attracting attention with its conservative attitude. In 2011, for example, Prince Albrecht zu Castell-Castell spoke out publicly against the appointment of women to church offices. He rejects the coexistence of homosexual pastors in Protestant rectories and spoke in this context of a counter-movement to the Bavarian regional church based on the model of the Confessing Church in the Third Reich .

Today's lines of the Castell

In 1803 the family split into the two Protestant lines Castell-Castell and Castell-Rüdenhausen, from the latter the branch line Faber-Castell split off in 1898 .

Ancestor: Count Albrecht Friedrich Karl zu Castell (* May 2, 1766 in Remlingen; † April 11, 1810 in Castell), son of Count Christian Friedrich Karl zu Castell-Remlingen (1733–1773). Count Friedrich Carl (1864–1923) was raised to the Bavarian prince's status in 1901 (with the salutation of Your Highness ). He was followed, from his marriage to Gertrud Countess zu Stolberg-Wernigerode , his son Carl (1897-1945), this - who died in World War II - from his marriage to Anna-Agnes Princess zu Solms-Hohensolms-Lich , his son, Albrecht zu Castell-Castell (1925–2016), married to Princess Maria Luise zu Waldeck and Pyrmont and his youngest son Ferdinand (* 1965), married to Countess Marie-Gabrielle von Degenfeld-Schonburg .

Count Otto (1868–1939), brother of the first prince, donated the younger branch, based on the Hochburg forest estate in Hochburg-Ach , Upper Austria.

Count Christian (1952–2010), younger brother of Prince Johann-Friedrich, was born to Baroness van Heeckeren van Wassenaer by his great-aunt Marie Amélie . Countess van Aldenburg Bentinck (1879–1975), appointed administrator of her family foundation at Schloss Twickel near Delden (Netherlands), established in 1953 , where his family has lived since then.

Ancestral father: Alexander Graf zu Castell-Rüdenhausen married Ottilie Freiin von Faber in 1898, daughter of the pencil manufacturer Wilhelm Freiherr von Faber, descendant of the company's founder Kaspar Faber . With royal Bavarian approval, the family name was renamed Graf von Faber-Castell and thus the establishment of a separate family, which was regarded as morganatic (non-dynastic). From this marriage there were four children. This branch line has its seat in the Faberschloss in Stein (Middle Franconia) . Anton-Wolfgang Graf von Faber-Castell headed the company until 2016.
The son of Count Alexander from a second marriage was given his father's maiden name and officially belonged to the Castell family; this Radulf Graf zu Castell-Rüdenhausen (1922-2004) was childless and owned Schwanberg Castle . The castle was sold after his death and is now owned by the evangelical community Casteller Ring .

Ownership of the former princely houses of Castell-Rüdenhausen and Castell-Castell: 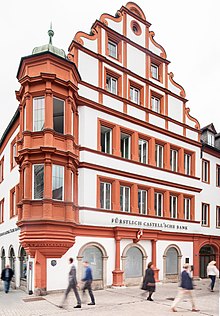 The coat of arms (Scheibler's Wappenbuch) is square in silver and red. On the crowned helmet with red and silver blankets, a red-and-silver squared hat with a peacock mirror.

(Note: The Frankish knights Schott von Schottenstein , as feudal men of the Casteller, carried the same coat of arms with a different crest.)

The Franconian Counts and Princes of Castell are not to be confused with the: