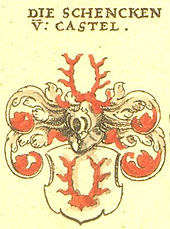 Family coat of arms of the Schenk von Castell

The von Castell taverns were a south German nobility family, ministerials of the bishops of Constance and the prince abbots of St. Gallen and had been based in the Swabian region since the 17th century. The noble family since 1665 and counts since 1681 died out in the male line in 1902.

The family was not related to the Immediate Frankish Counts of Castell , who held the court office of the inheritance of the Prince-Bishops of Würzburg and were therefore sometimes referred to as the von Castell gifts .

The ancestral home of the Castell taverns was Castell Castle in the Konstanz Monastery (today in the municipality of Tägerwilen , Canton Thurgau , Switzerland ). In older literature (Friedrich Cast), Bishop Ulrich II of Konstanz († 1140) is assigned to the family. Albrecht von Castell was a youth comrade and confidante of King Rudolf von Habsburg (1218–1291). His sons would have fought alongside Rudolf's sons. Diethelm von Castell officiated as Abbot of Petershausen Monastery and Abbot of Reichenau (1306–1343). The taverns office would have been in the Swabian Dukes of the House of Staufer exercised after their extinction in the Fürstäbten of St. Gallen .

1360 arrived in the 13th century by the St. Gallen monastery built castle Mammerthofen in Roggwil ( Canton Thurgau ) to the taverns of Castellammare. In 1612 Max Joachim Schenk von Castell settled in Freiburg im Breisgau . In 1645 he sold Mammertshofen Castle to Georg Joachim Studer von Winkelbach. The family has now shifted its focus to south-west Germany.

Marquard Schenk von Castell (1605–1685) officiated from 1637 to 1685 as Prince-Bishop of Eichstätt . He did a lot for the internal and external reconstruction of the city and the Eichstätt monastery after the destruction of the Thirty Years' War . From 1669 he was also the Imperial Principal Commissioner at the Perpetual Reichstag in Regensburg . Emperor Emperor Leopold I valued his diplomatic skills and on June 19, 1665 confirmed the status of a baron to him. On March 1, 1681, he raised Marquard and his family to the rank of imperial count.

Due to the Thirty Years' War , the feudal lordship of Dischingen , which at that time belonged to the lords of Westernach and von Stotzingen , was so heavily indebted that in 1661 Prince-Bishop Marquard II. Schenk von Castell was able to acquire the lordship of Dischingen and Trugenhofen and to his cousin Johann Willibald Schenk von Castell transferred. Dischingen with Trugenhofen Castle was acquired by the Princes of Thurn and Taxis in 1734 , who still own the property to this day. In 1680, the prince-bishop again recalled his services to the emperor, who pledged the Schelklingen- Berg rule to him in gratitude . In 1732 she was given to the family as a man from the front of Austria ; the feudal rule of the Counts Schenk von Castell lasted until the middle of the 19th century, they gradually sold their property in Schelklingen.