The Schwanberg (until the 19th century also Schwabenberg or Schwam (m) berg ) is a striking elevation (474 ​​meters) of the Steigerwald in the Bavarian administrative district of Lower Franconia .

The mountain is best known for its exposed location, the castle that can be seen from afar with the associated park, the evangelical community of sisters Communität Casteller Ring (CCR) with its religious church of St. Michael and its religious house, as well as the associated spiritual center Schwanberg , which is today Rödelsee district of Schwanberg forms.

The Schwanberg rises on the western edge of the Steigerwald to a height of 474  m above sea level. NN . It is slightly higher than the neighboring mountain ranges and largely separated from them; In addition, it protrudes far into the flatter landscape on the Main , which is 200 meters lower (so-called Schwanbergvorland ). This makes the mountain look very distinctive, especially from the west side, and offers a very good view. There are transmitters on the summit.

The upper slopes and the summit plateau of the mountain are forested; this area is a popular hiking and excursion area. The lower slopes are completely covered with vineyards ; at the foot of the Schwanberg are the Franconian wine-growing towns of Castell , Großlangheim , Iphofen , Rödelsee and Wiesenbronn . The mountain also gave its name to the Rödelseer Schloßberg vineyard .

Geologists can study some very beautiful outcrops from the Middle Keuper period (part of the Upper Triassic ) on the Schwanberg . The mountain is designated and documented as a geological educational trail. The Bibart rises on the eastern slopes of the mountain .

In the area of ​​the Schwanberg there are three designated geotopes and a nature reserve .

There is a former sand reed quarry on the hiking trail between Rödelsee and Schwanberg . It's overgrown. In the upper part of the exposed wall, red clay stones from the Lehrberg strata can be seen. The quarry is designated as Geotope 675a010 by the Bavarian State Office for the Environment .

Clay marlstone on the western Schwanberg

On the hiking trail between Rödelsee and Schwanberg there is an outcrop of plaster-bearing layers of estheria . Here gray clay and marl rock layers of 1 to 2 cm thick plaster layers are criss-crossed. The outcrop is designated by the Bavarian State Office for the Environment as geotope 675a007.

Geological outcrop on the southern slope of the Schwanberg near Iphofen. You can see the boundary between the layers of estheria (lying) and the reed sandstone (hanging).

There are outcrops on the south and west slopes of the Schwanberg. These show the partly continuous and partly erosive contact between the layers of estheria and the reed sandstone. Gray clay and marl stones with white plaster layers (layers of estheria) are overlaid by yellow sandstones (reed sandstone). Partly, clearly recognizable sedimentation structures are preserved in the sandstones. The outcrops are identified by the Bavarian State Office for the Environment as geotope 675a001. The layers on the Schwanberg have been awarded the official seal of approval “ Bavaria's most beautiful geotopes ”.

The approximately 10 hectare semi-dry grassland nature reserve on the Schwanberg (NSG-00393.01) is located on the western slope of the Schwanberg.

Due to the flat summit plateau and the steep slopes on three sides, the Schwanberg has been a place of refuge and settlement for people for thousands of years.

Traces of human settlement go back to the Stone Age . Many finds date to the Mesolithic period (10,000–4,000 BC) around 1200 BC. The forerunners of the so-called Keltenschanzen emerged . The remains of these ramparts, which were later renewed, can now be seen in the forest east of the spiritual center , where they secured the flatter east side of the mountain at two narrow points.

The Celts invaded around 400 BC. On the mountain in front. It is always mistaken to read that a late Celtic oppidum stood on the Schwanberg . However, this is not proven by findings.

The Schwanberg after the turning point

After several tribes moved through from AD 50, the Franks settled the area from the 6th century.

Archaeological excavations took place on a mountain spur below the castle in 1985, the findings of which document the foundations and some grave sites of the St. Walburgis Church on the Schwanberg, described in the records of Canonicus at Michael de Leone in Würzburg Neumünster . The church was destroyed in the Peasants' War in 1525 and was a well-known place of pilgrimage until then. At this point is the Kappelrangen or Kapellrangen viewpoint , which is reminiscent of the medieval chapel. From there you have a wide view of the Steigerwald foreland and the Main valley. The floor plan of the former St. Walburgis Church and the grave sites were marked with stone slabs.

The first construction of a castle as a precursor to today's castle probably took place around 1250.

During the Thirty Years' War the Schwanberg served as a place of refuge; the inhabitants of the surrounding villages holed up behind the Celtic walls . After the castle was burned down around 1633, it fell into disrepair until it was rebuilt in the early 18th century.

Events from the 20th century

In the putti garden of Schwanberg Castle

After a checkered history, the Giessen ceramics entrepreneur Jean Dern acquired the property in 1897 and converted it into an interesting tourist destination - Jean Dern's grave is located in the Rödelsee cemetery .

In 1911, Count Alexander von Castell-Rüdenhausen bought the castle and the castle estate with around 300 hectares of land. In 1898 he married Ottilie von Faber, the heiress of the pencil manufacturer Faber from Stein near Nuremberg, and thus founded the company name Faber-Castell .
The heir to the estate, Count Alexander's son from his second marriage to Margit Zedtwitz von Moraván and Duppau, Count Radulf zu Castell-Rüdenhausen (1922-2004), was childless; the castle was sold to the Casteller Ring CCR community after his death.

During the Second World War , the castle was confiscated with the aim of establishing a Nazi school there. After the war, American soldiers were housed in the castle until 1949, after which it was converted into a retirement home. After the retirement home was moved in 1957, the sisters of the evangelical community Casteller Ring (CCR) leased the castle, moved from their previous location in Castell to the Schwanberg and acquired the castle and castle grounds after the death of Count Radulf.

Today the castle and the St. Michael meditation house are used by the Schwanberg Spiritual Center or the community for extensive events all year round.
In 1986 St. Michael , the order church of the community, was consecrated, an architectural jewel by the Munich architect Alexander Freiherr von Branca .

Behind the mausoleum of the castle lords from Schwanberg begins a 32 hectare mixed forest area, which has been used as a funeral forest since May 2007 .

The Schwanberg is the starting point for an extensive network of hiking trails that open up the Steigerwald Nature Park .

The Schwanberglauf has been held every July since 1984. The demanding running route leads from Iphofen over the Schwanberg to Castell. The total length of the route is 10.2 kilometers. For the first 2.4 kilometers, there is a difference in altitude of 210 meters.

The park of Schwanberg Castle 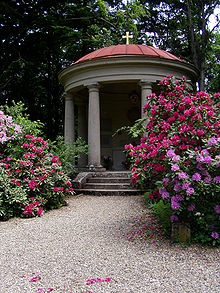 The mausoleum, burial place of the lords of the castle and the wife

Canapé and the putti figures autumn and winter

From 1919 to 1921, Count Alexander had the renowned garden planning office of the Munich court gardening director Jakob Möhl and his head gardener Ludwig Schnizlein set up a palace park with an area of ​​approx were created.
The numerous sandstone figures in the garden were made in 1930 by the Würzburg sculptor Carlo Müller based on models from the Veitshöchheim rococo garden. Today, most of them are in the putti garden of the palace.

Somewhat hidden in the forest between the center of the park, the Neptune Fountain, and its architectural conclusion, the classicist Monopteros, lies the small cemetery of the Casteller Ring community.
The round temple is the burial place of the two lords of the castle, Count Alexander and his son from his second marriage, Radulf Graf zu Castell-Rüdenhausen, and the second wife, Countess Margit Zedtwitz von Moraván and Duppau.

The Schwanbergpark belongs to the more recent history of garden art and occupies a special position with its design. In the complex, elements of the classic baroque garden and the English landscape garden are cleverly linked.

Linden alley and Neptune fountain, in the background the Monopteros

For many decades the palace park was left to its own devices, the basic structure of the garden changed and was hardly comprehensible, the picturesque morbid charm of the gradually increasing decay was clearly felt by the visitor.

Therefore, from 2009 to 2012 an extensive renovation and a careful dismantling of the garden took place on the essentials of the original garden concept from 1919.