The Counts of Kastl were a noble family of the 11th and 12th centuries who owned Kastl on the Nordgau . In particular around 1100 they are also called from Kastl-Habsberg to the Habsberg Castle near Kastl (today a place of pilgrimage of the Eichstätt diocese ). This is a noble family who are rarely referred to as counts. A particular county cannot be assigned to the family.

Hermann I had two sons: Hermann II the Younger († after 1071), Count of Cham, Margrave of Banz, and Friedrich I, († November 11, 1103), Count of Kastl and Habsberg. Hermann II was married to Berta (Alberada), the daughter of Otto von Schweinfurt . Both founded the monasteries Heidenfeld and Banz .

as well as the daughter Judith, who was married to a ministerial .

Friedrich, his son Otto and his relatives Count Berengar I von Sulzbach and Luitgard von Zähringen, daughter of Berthold von Zähringen , widow of Margrave Diepold II von Vohburg and Ernst I von Grögling , each owned a third of Kastl Castle. There they founded the Kastl monastery in 1103 .

Friedrich and Berta died in 1103. Their son Otto was married to Adelheid († August 9, 1105) and died after 1108 without children. His property goes to Heinrich V , possibly it was just an imperial property that had fallen back. The property passed to the Austrian Babenbergers via Agnes, Heinrich V's sister . 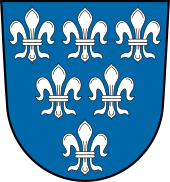 Today's coat of arms of Kastl (in the Lauterachtal) seems to be modeled exactly on that of the Kastl family , as can also be seen in the Kastl monastery at the feet of the founder figure of the Count of Kastl.

Family tree and its assignments mainly based on Heinz Dopsch , supplemented by information from existing Wikipedia articles.