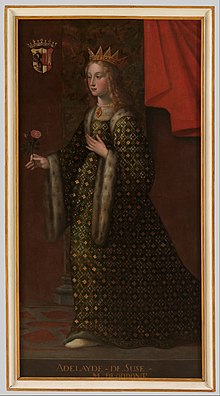 Adelaide of Susa (also Adelheid , Adelais or Adeline , as well as Adelaide of Turin (* around 1014/1020; † December 1091 in Canischio )) was from 1034, but not later than 1046, until her death, the Marchioness of Turin , however, led only the title comitissa (countess), while the official title marchio (margrave) lay with the three (at least two) husbands she survived. She was the last of the Arduine line . In 1036 she married Hermann IV of Swabia , who probably became Margrave, but died in 1038. Her second husband (from January 29, 1042 at the latest), the Aleramide Heinrich, known in Italian as Enrico del Monferrato, died in 1045, his last name was in June 1044.

Adelheid moved the seat of government from Turin to Susa and established the court there. In 1070 and 1091 she took military action against the Bishop of Asti in order to suppress his autonomist efforts. She was in contact with Petrus Damianus , who was staying at her court in 1063, and mediated the conflict between Henry IV and the papacy. In 1064 she founded the great Santa Maria Abbey in Pinerolo .

After her death, the margravate fell apart, because all dynastic projects were destroyed by death. Only from the third marriage, that with Otto von Maurienne , did children emerge, namely Peter (I) (margrave from 1060 (?)), Who married the imperial relative Agnes, the daughter of Wilhelm VII of Aquitaine . Bertha, born in 1051, was the second child. In 1055 she was married to Heinrich (IV.), Who was barely a year older, which resulted in close contacts with the imperial family. Eventually she gave birth to Amadeus , Adelheid and Otto. On August 9, 1078, their eldest son died, and in 1079 their youngest daughter. Amadeus thus became an heir, but he died in 1080. Her daughter of the same name, Adelheid, was married to Rudolf von Rheinfelden , the anti-king from 1077 to 1080, but she died in 1079. Otto (III.) Became Bishop of Asti in 1080 and in this Office an opponent of his mother's equalization policy.

Adelheid was born in Turin around 1014/1020 as the daughter of Odalrich-Aginfred II (earlier often translated as Odalrich-Manfred) and Bertha, daughter of Margrave Oberto from the Obertenghi family. Nothing is known about their youth. Her only brother died before her father in 1034. The father died the next year, the mother around 1040. After Odalrich-Aginfreds death, the great margraviate between her and her sisters Irmgard (Imilla, also Immila) became Otto von Schweinfurt married, and who rose to Duke of Swabia in 1048, and Bertha split up. Adelheid received the largest part of the counties of Ivrea , Auriate , Aosta and Turin , but the margravial title was primarily associated with military obligations that she was not allowed to fulfill as a woman. Conrad II , Roman-German Emperor from 1027 to 1039, therefore arranged a marriage with his stepson Hermann IV , Duke of Swabia. He set him up in 1034 as Margrave of Turin. The wedding was held in January 1037, but Hermann died on July 28, 1038 on the Emperor's Italian expedition.

In order to secure her status, she married Heinrich von Montferrat on January 29, 1042, who died in 1045. It is not known whether he received the margrave dignity. It appears last in a document from June 1044. Immediately afterwards the third marriage followed, this time to Otto von Savoyen (1046). He received through Heinrich III. in 1046 he became margrave. With Otto, Adelheid had three sons, Peter I, Amadeus and Otto, as well as the two daughters Bertha and Adelheid . Bertha, Countess of Maurienne, married the later Roman-German Emperor Heinrich IV. Adelheid married Rudolf von Rheinfelden , who was temporarily installed as the anti-king to Heinrich IV. For Henry III. the marriage with the family, which was influential in important parts of the empire, was particularly important when the break with the Counts of Canossa occurred in 1055 . He had Countess Mathilde taken prisoner to Germany. The agreement to marry the two children Bertha and Heinrich took place in this context. The marriage between the four-year-old bride and the five-year-old groom took place in Zurich at Christmas 1055 .

In 1063, Petrus Damiani was at court, and he sent her a letter the following year. In it he called on them to take action against those in the clergy who lived in cohabitation . In the same year, the Margravine founded the great Santa Maria Abbey in Pinerolo . Her son Amadeus moved to Rome as a pilgrim around 1066 , where he swore to defend the Holy See .

Also in 1064 Adelheid obtained the investiture as margrave for her eldest son Peter, but Adelheid ruled for him. In 1068 Heinrich IV., Long since sole ruling Roman-German king , tried to get the divorce from Bertha at the Diet of Worms, which angered Adelaide against the Salier . Petrus Damiani intervened and threatened the young king with ecclesiastical and divine punishments. The princes dissuaded the king from his plan by arguing that it was a grave insult to the margravine. Through the intercession of Bertha Heinrich IV. Adelheid received support against Pope Gregory VII. And Mathilde von Tuszien . She and her brother Amadeus were in Heinrich's retinue when he made his walk to Canossa . Heinrich had to travel via Savoy because the nearby Alpine passes were closed. He discussed it with Adelheid in Turin. In gratitude for her mediation work, Heinrich gave Bugey back to Adelheid and her family and kept Bertha as his wife. Adelheid was one of the opponents of the Gregorian reforms , although she supported the autonomy of the church. This also applied to the fight against loyal bishops in their own domain, such as against Ingone von Asti, who had been installed by Archbishop Guido di Velate of Milan. However, she held the bishop from 1072 to 1079, although she was harassed by Pope Alexander II . When Cuniberto, the bishop of Turin, got into a dispute with the monks of San Michele della Chiusa, who were supporters of church reform, Peter I supported the bishop in driving out the abbot there. However, when this abbot fell into the hands of Henry IV, Adelheid intervened in his favor.

She also acted as a mediator in the battle between her two royal sons-in-law Heinrich and Rudolf. Her daughter of the same name died in 1079, Rudolf von Rheinfelden was killed in battle in 1080. Peter I, Adelheid's eldest son, had already died on August 9, 1078. He left behind a daughter from his marriage to Agnes von Poitiers, but she was not entitled to follow in the margrave's office. This office passed to the second-born son Amadeus, who died on January 26, 1080. He left Umberto II as heir. Adelheid tried to secure the succession to the Count of Montbéliard by marrying her granddaughter Agnes with Friedrich, but this margrave, who was still appointed by Henry IV, died before Adelheid on June 29, 1091.

Adelheid died in December 1091. She was buried in the parish church of Canischio (Canisculum), a small village on the Cuorgnè in the Valle dell'Orco, where she had retired in her last years. In the cathedral of Susa there is a statue made of walnut wood in a wall niche. the Adelheid represents kneeling in prayer, including the inscription: "Questa è Adelaide, cui l'istessa Roma Cole, E primo d'Ausonia Onor la Noma".

Adelaide had grown up with her father's stewards and had even learned the martial arts. She had her own weapons and armor. She was considered beautiful and virtuous. She was pious, spirited, and did not hesitate to take action against the greats of her country. She encouraged the minstrels at her court by asking them to compose songs with an emphasis on religious values. She had the history of the region recorded. Contrary to the possibilities given to the women of her time, she was able to keep her property except for the county of Albon. Admirers of her time compared her to the biblical Deborah and recognized her as the "Italian Marquise".